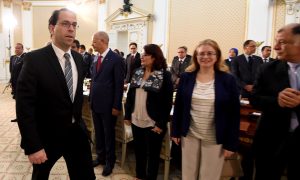 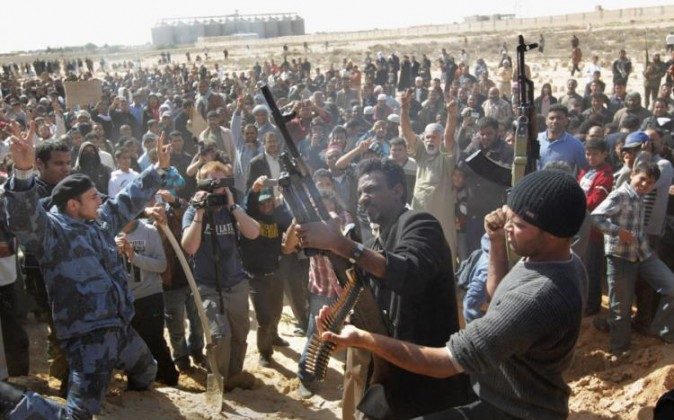 Rebel fighters shoot into the air during a funeral for slain comrades on March 3, in Ajdabiya, Libya. (John Moore/Getty Images)
Africa

A new report by the British Parliament’s Foreign Affairs Select Committee is a scathing rebuke of British actions in the Libyan civil war.

The committee report indicates that prior to NATO’s intervention, the threat and impending massacre of civilians in Benghazi was overstated and that the rebels were composed of a significant Islamist element.

“If the primary object of the coalition intervention was the urgent need to protect civilians in Benghazi … then this object was achieved in less than 24 hours,” said the report.

“Despite his rhetoric, the proposition that Muammar Gaddafi would have ordered the massacre of civilians in Benghazi was not supported by the available evidence,” the report added.

The report also criticizes the Cameron government for failing to formulate a coherent strategy on Libya and says the instability that followed the intervention has created space for groups like the ISIS terrorist group to operate.

NATO’s intervention in Libya was primarily an air campaign that did not commit to an on-the-ground stability effort.

Additionally, the fresh memory of Iraq likely kept the United States from committing to a longer-term investment in Libya that would have been necessary to avoid the current situation, according to Amanda Kadlec, analyst for research organization RAND Corp.

“I don’t think it was the intervention itself, even though it may have been hasty, but it didn’t cause the current crisis. It was the lack of attention by Western powers in the aftermath of the intervention,” said Kadlec.

Much like Iraq, policymakers had little knowledge of the complex history of Libya and its tribal divisions, according to Kadlec.

Before the current troubles, Libya had one of the strongest economies in Africa, says the report.

In 2010, Libya generated a gross domestic product (GDP) of around $75 billion and an average annual per capita income of about $12,250, which is on the same level as some European countries, notes the report.

Since toppling Gadhafi, Libya’s once promising economy has dramatically declined. GDP fell to $41 billion in 2014, inflation rose to 9.2 percent, and the country’s place on the U.N. human development index slumped to 94th in 2015, according to the report.

The U.N. Office for the Coordination of Humanitarian Affairs estimated that, as of May 2016, more than 2.4 million people in Libya required protection and humanitarian assistance, out of a population of 6.3 million.

Although the committee’s report deals a blow to champions of the use of military force to prevent atrocities on civilians, many Libyans have expressed gratitude for the intervention.

“If you knew the facts about the civil war in Libya, you would understand why we wished the air strikes had come sooner,” said Rema Abdulaziz, a Libyan doctoral student at the University College of London, in an opinion piece published by The Independent.

Abdulaziz also disagrees with the notion that the intervention was a disguise for Western-style colonialism or imperialism. “Every situation is different, and Muammar Gaddafi was a genocidal maniac. Public executions and ‘disappearings’ were common under his dictatorship; executions were even broadcast during children’s TV programmes,” Abdulaziz added.

The Libyan government was divided between two rival camps: the General National Congress (GNC) located in the capital, Tripoli, and the House of Representatives (HoR) in Tobruk. Neither the GNC nor the HoR has any real power as legislative bodies anymore.

The National Transitional Council (NTC), which led the opposition to Gadhafi, transferred power to the democratically elected GNC. The congress was unable to project state power across Libya and the country spiraled into violent clashes between armed factions by June 2014.

Parliamentary elections were held in 2014 for the HoR, the successor assembly to the GNC, which was dissolved amid public pressure. As violence again escalated in Tripoli, the HoR set up their government in the eastern city of Tobruk. The legitimacy of the HoR was called into question and some members reestablished the defunct GNC in an attempt to act as a rival legislative body in the capital.

In 2015, the U.N. brokered a power-sharing deal with elements from the GNC and HoR to form the Government of National Accord, which arrived in Tripoli and gained control of some ministries in March 2016. However, neither the former GNC nor the HoR have fully accepted its authority.

None of the governments are able to exert full control over Libyan territory and local armed actors continue to wield the most influence in any given part of the country.

This has led to a security dilemma whereby armed rebels command ultimate power. There are around 1,700 armed groups now active.

Fall of Libya, Rise of ISIS

The Libya intervention was a moment for Western liberal powers to exercise what’s called the Responsibility to Protect norm. The doctrine promotes the use of military force backed by the U.N. Security Council to prevent massacres against civilians.

However, the fall of Libya ended up contributing to the rise of ISIS.

Libyans began traveling to Syria in 2011 to join the ranks of ISIS for a variety of reasons, including to fight the Syrian regime of Bashar al-Assad. A group of Libyans in Syria formed the Battar Brigade, which pledged allegiance to ISIS. In 2014, many fighters from the Battar Brigade returned to Libya and established a foothold in the eastern part of the country.

ISIS began to consolidate a presence in Sirte, Gadhafi’s birthplace. The terrorist group established a rigid system of governance that included public executions to instill fear in the population.

In response to the growing threat from ISIS and other Islamic militants that pose a threat to the country and the West, the United States stepped up airstrikes in August.

There are also an estimated 4,000 to 6,000 foreign fighters operating in the country.

Libya’s lack of border controls and conflicts in the region facilitated the migration of refugees seeking asylum in the European Union. There are nearly 37,000 registered asylum seekers and refugees in Libya. There are also more than 434,869 internally displaced persons in Libya, as of June 2015.

As of September 2015, half a million people have fled Libya by sea to head for Europe, according to a report by the International Organization for Migration.