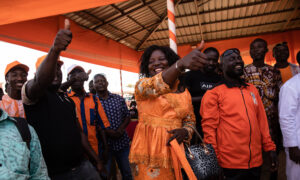 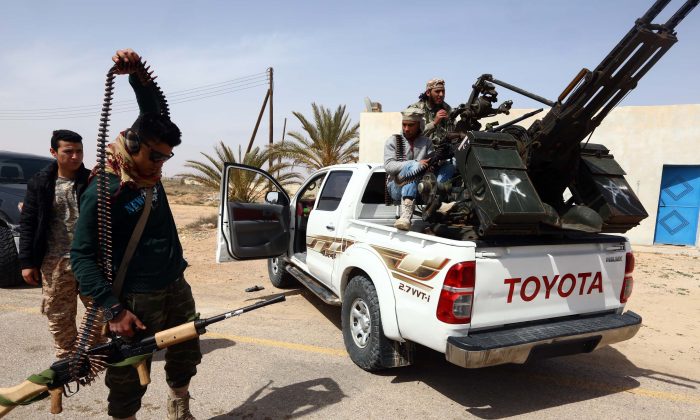 BENGHAZI, Libya—Libya is rapidly turning into a new front in the fight against the Islamic State (ISIS), which is heavily recruiting militants from abroad and trying to exploit years of chaos to expand its foothold in the oil-rich North African nation.

Washington and its European allies are seeking to end the interminable divisions among Libyan factions to form a unity government that the West can support in fighting the jihadis. U.S. airstrikes on Friday against an ISIS training camp, which killed more than 40 suspected militants including a prominent Tunisian leader, were a sign the U.S. is ready to move robustly even before a unity government is agreed upon.

From their stronghold in the city of Sirte, the militants have lashed out in recent months with suicide bombings against police. They have made forays attacking Libya’s vital oilfields and export facilities, setting back efforts to rebuild what is effectively its only money-making industry.

ISIS has so far been unable to take over large parts of Libya as it did in Syria and Iraq—and the Libyan branch has suffered some setbacks in the past year. Rival militias drove its fighters out of one city, Darna, and a U.S. airstrike in December killed the leader of the affiliate.

But it has recently launched a drive to build up its presence: U.S. officials say in past weeks and months, ISIS has been bringing in fighters from abroad, mainly from North Africa and sub-Saharan Africa. From around 3,000 fighters, they estimate it now has a total of about 5,000.

Forging a unified Libyan government to fight the jihadis is a monumental task in what has effectively been a failed state since the 2011 ouster and death of longtime dictator Moammar Gadhafi.

After Gadhafi, Libya’s military collapsed and the country fragmented, carved up by powerful militias. There are two governments: One, based in in the capital, Tripoli, is dominated by Islamists and backed by a coalition of militias known as Libya Dawn. The other is internationally recognized and based in the eastern city of Tobruk. It is backed by other militias and fragments of the military led by Gen. Khalifa Hifter.

The two sides have been battling each other for the past year. U.N.-led efforts to build a unity government have split both sides, with some politicians and militias in each camp supporting, but others still deeply opposed.

In a sign of how convoluted Libya’s civil war has become, some militias backing the Tripoli government have been fighting ISIS outside Sirte, while others have allied with the jihadis to fight Hifter’s pro-Tobruk forces for control of Libya’s second-largest city, Benghazi.

If the U.S. and Europe can’t get the militias to agree, efforts to fight ISIS won’t succeed even if they manage to get the politicians in Tripoli and Tobruk on the same page, said Libyan political analyst Anas al-Gomati. Some militias will probably try to use international intervention—whether airstrikes or military support—to eliminate their rivals, fueling the war.

Without a deal among those militias… The civil war will get out of control.
— Anas al-Gomati, Libyan political analyst

On the map of Libya, ISIS’ physical presence is limited. It controls Sirte and several adjacent villages along the Mediterranean coast. But it has dangerous pockets around the country, including in Tripoli, but particularly around the western city of Sabratha, where the U.S. airstrikes took place Friday.

Several ISIS training camps are outside Sabratha, and the jihadis appear to have been planning a move to take over the city itself, one local official told The Associated Press. He estimated there were up to 700 ISIS fighters in the area, most of them Tunisians, and that more militants were coming from Sirte to boost the effort.

Late last year, ISIS jihadis made a show of strength in Sabratha, defying local authorities by parading openly in vehicles and waving black flags. They passed the ruins of a Roman-era city that is Libya’s most dramatic antiquities site—raising alarm that they planned to level it as they have done to ancient sites in Syria and Iraq. So far, the Sabratha ruins have not been targeted.

Police have raided a number of ISIS hideouts in Sabratha in recent days, killing at least seven fighters and capturing others, the official said. In interrogations, many of the captured fighters—some aged 17 or 18—said they had arrived in Libya in recent weeks, he said. The official spoke on condition of anonymity because he was not authorized to talk to the press.

Another big fear is that the jihadis could capture Libya’s oil facilities, largely located in the deserts east of Sirte. They have carried out attacks recently that have set back the industry, which has been struggling to rebuild since Gadhafi’s fall.

During his rule, Libya produced 1.6 million barrels per day. That plunged as low as 200,000 in 2014 and had slowly been building back up to about 430,000 last year. But since an ISIS attack on oil storage tanks in January, production has dropped again to about 350,000 barrels a day.

ISIS expanded into Libya in late 2014, seizing Darna, then Sirte. But the same chaos that opened the door for ISIS in Libya has also been a hindrance for the group’s expansion.

The field is already crowded with powerful, well-armed militias, which are tightly bound by local or tribal loyalties. That has made it difficult for ISIS to poach recruits. Also hurting recruitment, overwhelmingly Sunni Muslim Libya does not have the sectarian divisions that ISIS has exploited in Syria and Iraq, where it uses hatred of Shiites to bring Sunnis into its ranks.

Obama: US Will Keep Looking to Hit ISIS Targets in Libya

Serbia: 2 Hostages Believed Killed in US Airstrikes in Libya

In November, the U.N. team that monitors ISIS reported to the Security Council that the militant group “seems limited in its ability to expand quickly from its current stronghold” because it doesn’t have the numbers. It said it didn’t seem capable of capturing the oil facilities.

That may explain the turn to fighters from abroad. But the influx appears to be fueling divisions within ISIS as well.

Three Libyans who said they had joined ISIS told AP that they see most of the new recruits as lacking skills and as opportunists, looking to gain property and money confiscated from ISIS opponents in Sirte.

The three, who claimed to be a military commander, a recruiter and a spiritual leader, all spoke to AP on condition of anonymity because they were not authorized to discuss the difficulties within the group to the media.

The recruiter complained that most newcomers lack “useful skills” and “obedience.” ”They are simply not as qualified as the ones in Syria and Iraq.”