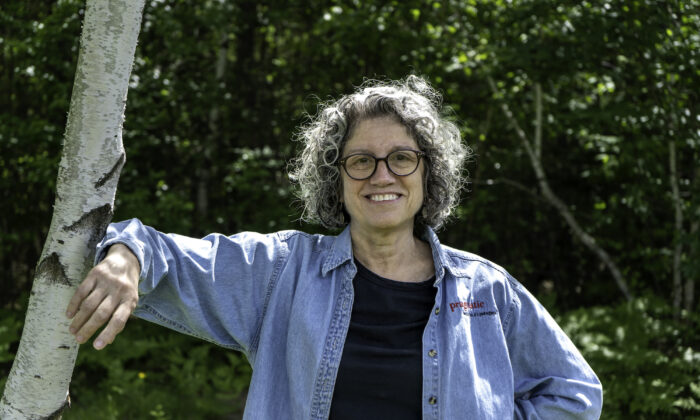 Jody Underwood of Croydon, New Hampshire is part of a growing movement of likeminded "Free-Staters" seeking freedom from government in the Granite State. (Neil Sheehan/The Epoch Times)
US

As a young schoolgirl in the People’s Republic of China, Lily Tang Williams spent most of her formative years believing in the totalitarian government of Mao Zedong.

The former Red Guards student group member learned that Marxist ideology was the answer to everything, individual rights and liberty, the enemy of the people.

Tang Williams said it would take years to remove the shackles of her “brainwashing.”

“I did not wake up and become an independent thinker until 20 years later,” Tang Williams told The Epoch Times, “because you are indoctrinated all your life in China.

“The ideology is communist indoctrination, [that] government is the solution to all your problems.”

In 1988, Tang Williams emigrated to the United States, met her husband, started a family, and ran for political office in left-leaning Colorado. She learned about libertarianism from her husband and a new political phenomenon called the New Hampshire Free State Project.

Tang Williams said she fell in love with New Hampshire on her first visit in 2016, and three years later, the family left Colorado and moved to the Granite State, where the motto, “Live Free or Die,” is more than just words.

Today, she is proud to call herself a New Hampshire “Free Stater.”

“I am the kind of person that cares about freedom,” said Tang Williams, 57, a candidate for U.S. Senate and organizer of the Republican Town Committee in Weare, New Hampshire. “If I say I will do something, I keep my promise.”

Part of Tang Williams’s promise is to continue serving the cause of liberty and helping other liberty-minded “Free Staters,” who now number over 6,000 since the project launched in February 2003.

The movement has grown exponentially since the COVID-19 lockdowns in 2020, she said.

Participants say the Free State Project is an idea whose time has come—a way of life rather than a physical enclave.

In 2001, its founder, Jason Sorens, wrote an essay about the project to galvanize interest in mass political migration, a movement dedicated to liberty but needing a place to settle and thrive in a history steeped in freedom.

The promised land was New Hampshire, picked from a list of 10 states based on its small size, favorable business climate, low taxes, and rural landscape. The goal was to have 20,000 people sign a pledge to move to the state.

Bruce Fenton was among those Free Staters who signed the pledge and moved to New Hampshire with his family.

“I just really liked the idea of pursuing liberty in our lifetime by going to a place where you are with like-minded people,” said Fenton, who is also running for a seat in the U.S. Senate.

Being from blue-state Massachusetts, Fenton said, “like many states,” the Bay State is crippled by its bureaucracy.

“You do not get any benefit from it. You get many drawbacks,” Fenton told The Epoch Times.

“The bigger the government, the more corruption. The more government they have, the more broken they are,” Fenton said.

“It is nice to see most recently that it has come into its own and become more successful. Early on, it was speculative, an experiment. There was no guarantee it would work,” Fenton said.

“There are more moving [in] every day. It is a free state, though not perfect.”

Sorens said the Free State Project exceeded his expectations but not his hopes.

“I was pessimistic about the political future of the U.S. when I wrote the essay that started it all,” he told The Epoch Times.

“I did not expect so many people to move to New Hampshire and have such an [significant] impact in a short period, but I hoped something like that could happen.

“New Hampshire [people] are freer now because of the Free State Project and are probably the [most free] people in North America,” he said.

Sorens said the project’s mission seems even more relevant in 2022 as people network and pool their resources to promote change and freedom in New Hampshire.

Free State Project president Carla Gericke, an attorney from South Africa who moved to the United States in 1996, said more than 1,000 Free Staters came to New Hampshire in 2021 and that number continues to grow.

“Many people who identify with our values are now starting to say, ‘I am a Free Stater too,'” Gericke said.

Once they arrive, other Free-Staters volunteer to help families unpack and establish connections through social media, weekly meetups, and larger gatherings such as the yearly PorcFest and Liberty Forum.

“We bring people in, and then we try to create a healthy community where people can figure out what they want to do,” Gericke said. “We create the opportunities for people to show up. There is no specified [physical] enclave. People live all over the state.”

Gericke said the project chose New Hampshire not only for its vibrant economy but for the opportunities it offered for political activism and serving in the state legislature, one of the largest in the United States.

Many Free Staters are now elected state lawmakers advocating for freedom. Many others serve at the community board and committee levels.

“They [Democrats] have to work with us, and they hate it,” said Gericke. “Sadly, the flip side is we have raised the state’s profile. We are seeing money coming into New Hampshire. Most of it seems to be Soros-funded.”

Fortunately, “we have enough influence where we have got to line up our billionaires to match theirs,” Gericke joked.

“What is interesting for me as an immigrant from South Africa is how many immigrants we have [in the movement]. We have a lot of Russians and Ukrainians and old Soviet bloc Free Staters. Many of us are trying to attract people who do not want to tear things down. We want people who want to build a future.”

Jody Underwood is another Free Stater who came to New Hampshire with her husband from Philadelphia in 2007.

“I do not think of it as a membership. It is more of an idea than an organization. Everybody has their political issues, right? We tend to all lean libertarian,” Underwood said.

Underwood said she first read about the Free State Project in Reason magazine, a conservative publication, many years ago.

“We have lived off-grid the whole time we have lived here,” Underwood told The Epoch Times. “We have solar panels that generate electricity. We have batteries that store it, and we use generators when there is not enough sun. That is how it works.”

Underwood credited libertarian economist and former presidential candidate Ron Paul for sparking a “wave of people” to sign the pledge.

“We were part of that first thousand that moved here. The next big wave was COVID. So many people moved here because of health freedom. They just wanted to get away from their state and were looking for the promise” of liberty.

The North Country of New Hampshire is among the more popular locations for Free Staters because of lower housing prices. Furthermore, in the current gig economy, this translates into telecommuting opportunities.

As a Free Stater, Underwood focuses her activism on school choice. However, the family’s dream is going “back to basics.”

“We’re not Preppers, per se, but let’s be prepared,” she said. “We chose it when we were ready to go on this adventure, which was moving up to New England.”

Fenton said viewing the Free State Project as an outlier political migration movement would be wrong.

“Opponents have said we have kind of taken over the state. It is not fringe. It is a majority in many ways. The message of liberty is popular right now,” he said.

In the meantime, Tang Williams said there are promises to keep, and many miles to go before the movement finally achieves its mission of more freedom, less government.

“There are lots of battles to fight. There are many leftists in our state, too,” she said.

“This is the United States of America. Why are there so many Marxists and Communists here?”