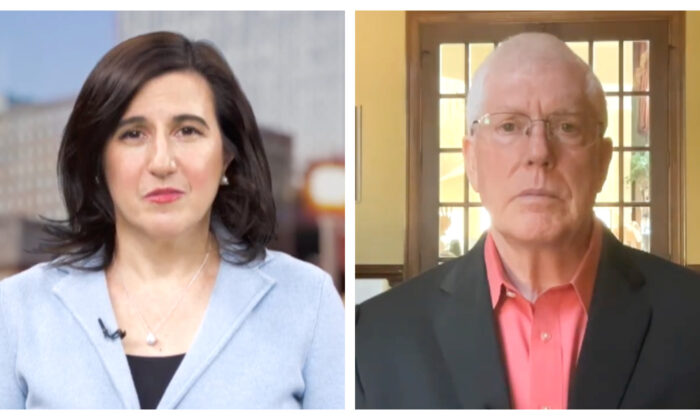 Staver questions the reason for creating such a database, saying it’s like a blacklist to purge people of faith.

Liberty Counsel is a Christian legal organization fighting for religious freedom. A recent notable case is that they represent 35 Navy members, many of them SEALs, against the COVID-19 vaccine mandate. A federal court granted an injunction against the mandate in January, and a federal appeals court stayed the injunction last month.

“There should be no reason to permanently archive whether any individual asked for a religious exemption. That is none of the government’s business, and there is no good purpose for which to use that information,” Staver told NTD’s “The Nation Speaks.”

Staver said now there are 55 federal departments and agencies that have been collecting such data. According to a review of Federal Register notices by The Epoch Times, the agencies include the departments of Defense, Justice, Health and Human Services, Housing and Urban Development, Transportation, the Treasury, the Social Security Administration, and the Federal Election Commission.

“Why do they need to have this permanent database that will be archived in the National Archives on a permanent record? There is no real good answer to that,” Staver said.

Most of the Federal Register notices cite the Privacy Act of 1974 as their justification for collecting such data, with some saying to implement Biden’s COVID-19 executive order.

“Why all of the sudden, during this administration, do we need to track every single person who asked for a religious exemption? How can it be used against those individuals?” asked Staver.

He said the database can be used to deny those federal government employees who transfer to another agency or department, either because of career advancement or change of positions.

“They can look at that database, in part of that transfer and reviewing somebody. And if they have a religious exemption, they can just simply be denied. You may not know that’s why you’re being denied but that’s part of the database that the place would be looking at,” said Staver.

The same applies to those federal government employees transferred into the private market. For example, many military people transition out because of their expertise. They could be blocked, too, said Staver.

“In other words, this could be used as a blacklist for many people. And it would apply in all cases to the employees of these departments and agencies,” said Staver.

Being tracked are not only federal government employees, but also contractors, interns, guests, or even visitors, said Staver.

“If you have an event sponsored by one of these agencies, if you attend that event, and there’s a proof of vaccination requirement, and you wanted to ask for an exemption, you could also be logged as a private individual in this permanent database.”

The information being collected is very intrusive and extensive, said Staver.

“They are tracking not only whether you apply for a religious exemption, but even your doctrinal views, even kinds of conversations or verbal information that they may obtain through this process, including information from your clergy and your particular doctrinal or church or synagogue beliefs. It’s very intrusive, and it is quite extensive, and it has happened within the last year.”

There’s no precedent in our lifetime for creating such a database, except for the Nazi regime documenting the Jews, said Staver.

“I’m not saying that’s what’s happening here, but I can say that that is how those Jewish individuals were identified. It was through a private cooperation with IBM and the Nazi government. And you have to ask yourself, why do they want this?”

Staver said people in the military had been abused for asking for religious exemptions.

“Men and women in the military have been abused, and they have not been treated humanely in many of these cases,” Staver said.

To date, the military only approved minimal religious exemptions to the COVID-19 vaccine mandate, despite tens of thousands of applications.

Some whistleblowers told The Epoch Times last month that the military has discriminated against them for asking for religious exemptions.

“I think what you see is a purging of people of faith,” said Staver. “So these are all people of various kinds of faith. And it’s a wide variety. And I think what we’ve seen in some of these places of employment, including the military, is a purging of these devout religious individuals. And I think this is another aspect along that same line. This could be used to purge individuals from federal employment, from even the private sector because of their religious faith.”

In January, Reps. Ralph Norman (R-S.C.) and Ashley Hinson (R-Iowa) introduced a bill, seeking to bar the use of federal funds for any such database. Another 20 GOP House members have cosponsored the bill.

Staver said if the bill couldn’t pass in the Congress, his organization would bring the federal government to court.

“Certainly we’d like to have this law passed in Congress to defund it,” said Staver. “But certainly if that didn’t happen, we would litigate and not only stop it, but as for these lists to be destroyed. There should be no reason to permanently archive whether any individual asked for a religious exemption.”

The Epoch Times has contacted Safer Federal Workforce Task Force and the Office of Management and Budget (OMB) for comment.