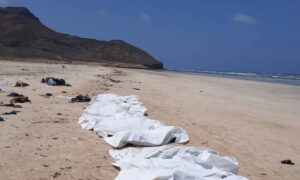 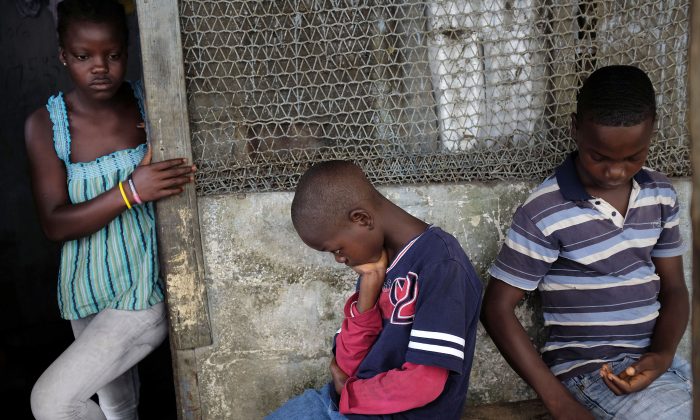 In this photo taken Sunday, Sept. 28, 2014, Promise Cooper, 16, Emmanuel Junior Cooper, 11, and Benson Cooper, 15, sit at their St. Paul Bridge home in Monrovia, Liberia. The Cooper children are now orphans, having lost their mother Princess in July, and their father Emmanuel in August. Their 5-month-old baby brother Success also succumbed to the virus in August. Ruth, their 13-year-old sister is being hospitalized with Ebola. The three never fell sick to the deadly disease. (AP Photo/Jerome Delay)
Africa

MONROVIA, Liberia—First 16-year-old Promise Cooper’s mother complained of a hurting head and raging fever, and she died days later on the way to the hospital.

The following month, her father developed the same headache and fever. Her baby brother grew listless and sick too, and refused to take a bottle.

That’s when Promise knew this was not malaria.

She had heard about Ebola on the radio. When she tended to her father, she washed her hands immediately afterward. Desperate to keep her three younger siblings safe, she urged them to play outside their one-room home. Yet she was powerless before an invisible enemy, as her family of seven disintegrated around her.

In the meantime, neighbors and relatives were starting to become suspicious. No one came by to check on the kids, not even their grandparents.

Word, like the virus, was spreading through Liberia’s capital: The Coopers had Ebola.

In Liberia’s large, deeply religious families, there is usually an aunty somewhere willing to take in a child who has lost a parent. But Ebola, and the fear of contagion and death, is now unraveling bonds that have lasted for generations.

At least 3,700 children across Liberia, Guinea and Sierra Leone have lost one or more parents toEbola, according to the U.N. children’s agency, and that figure is expected to double by mid-October. Many of these children are left to fend for themselves, and continue to live inside infected houses.

Promise was used to looking after her younger siblings, and often carried a baby cousin on her hip around the neighborhood. When her mother was alive, they would alternate weeks of cooking. She knew how to make porridge for breakfast, rice with potato greens for dinner.

When her father fell sick, she took over all the things her mother used to do. There was no school because of the Ebola epidemic, so she had time to wash her brothers’ soccer jerseys and jeans.

But nothing she did could help 5-month-old Success, whose name reflected his parents’ dreams. Just like their mother, the little boy died. There was nobody to help them and no ambulance to spare, so his body stayed in the house for several days.

By the time the ambulance finally came to take away her father and the tiny corpse bundled in blankets, 11-year-old Emmanuel Jr. was stricken too.

Promise watched as medics packed half her family into the back of the ambulance. She was now alone with 15-year-old Benson and 13-year-old Ruth.

She could not afford a phone call to see how their father and brother were doing, even if she could get through on the hotline for relatives that was almost always busy. A taxi to the Ebolaclinic across town cost even more. An uncle stopped by to drop off some money, but left without touching the children for fear of infection.

Promise resolved to keep the family together until her father came back.

She decided to use what little cash she had to buy plastic bags of drinking water. The family had a cooler, and she planned to sell the bags she bought at $1 a piece for $2.

Day after day, though, no customers came. Nobody wanted to buy water from the girl whose mother died of Ebola, and whose father and brother were at the clinic. Promise looked healthy, but fear was overcoming compassion in the St. Paul Bridge neighborhood where they lived.

If the children sat down somewhere, people would spray bleach after they got up. When they tried to buy something with what little money they had, vendors refused to serve them.

Neighbors didn’t want the Cooper boys playing with their children. And even though health workers had disinfected the path from the well that went right past their house, women took their brightly colored plastic buckets the long way around instead.

Promise, overcome with grief and beaten down by stigma, became depressed.

“Why don’t you want to talk to me? Why God does nobody want to come around?” she sobbed. “We are human beings.”

Finally she scraped together enough change from a cousin to take a taxi to the gates of the Ebolaclinic. A security guard said he would check whether Emmanuel Cooper Sr. was on the list of the living.

Promise and Ruth paced outside the barbed-wire topped walls of the clinic for what felt like hours, waiting for an answer on when he would be coming home.

The guard came back. He said he was sorry, but their father was dead.

The girls broke down sobbing.

No one could tell them if 11-year-old Emmanuel was still alive.

Even as Promise lost both her parents, another man in the community was trying to document just how many children were orphaned in the St. Paul Bridge community. Kanyean Molton Farley, a human rights researcher by day, devoted all his spare time to making a list of the now 28 parentless children living alone. In most cases, teenagers like Promise are now raising their siblings amid an overwhelmed social welfare system.

“The story of the Cooper children touched my gut, and I never stopped coming back,” he said one morning, as he dropped off soap for the children.

The family’s rent was already paid through the end of the year, but they soon ran out of money to pay the electricity. Farley worried most of all that Promise could fall prey to an older man. At 16 and hungry, she was vulnerable to abuse.

Then the Cooper children caught a lucky break: Promise saw her brother’s face on television, among government photos of children who had survived Ebola at the city’s clinics but were still separated from their families.

“It’s him, it’s him!” she told Farley. Off they went to get Emmanuel — the first in the family to survive the plague sweeping their neighborhood.

Not long after Emmanuel came home, Ruth became feverish and unwell one night. How could this be happening again? A terrified Promise called their friend Farley late at night. He couldn’t come until morning because of the curfew.

So he told her to use the family’s mattresses as room dividers in the single bedroom where they all slept. Ruth would stay on one side; the healthy children would sleep on the other.

At first light, an ambulance called by Farley took Ruth to the hospital.

Now it is just Promise and the boys.

She insists they will never go live with strangers. Yet they no longer want to stay in the house where their parents lay dying and their brother’s body sat for days.

On a Sunday afternoon after church, there is no television to watch without electricity. The TV set sits gathering dust with a soiled stuffed unicorn on top of it.

The children sleep together in their parents’ bed at night, instead of crowding on the floor below as they did in their previous life. Some nights her brothers weep for their mother, and Promise tries to be firm but caring.

“I tell them Ma and Pa are no more, and that they shouldn’t worry about that,” she says. “We must concentrate on living our lives because they are gone.”

Just a few weeks ago, their aunt Helen came around to the house — the first family member to do so in months. She had been upcountry when the children’s parents died and wanted to see how they were doing.

It pains her to think of her brother, and what he would say about the children out of school, cooking and cleaning for themselves.

“I have to come back because everyone has abandoned them,” says Helen Kangbo, breast-feeding her 1-year-old daughter Faith after joining her nieces and nephews for a paltry dinner of rice. “I must have the courage to come.”

Of course, now that Helen is in contact with the children, she is shunned by the same extended family that fears Promise and her siblings.

Each day Promise mixes up bleach and water in bottles to keep the house and her brothers clean. “Don’t go around people. Don’t touch your friends. Anything you touch, you wash your hands,” she scolds them.

Days later, she says her prayers have been answered: After three weeks at an Ebola treatment center, 13-year-old Ruth is cured. She is still weak, so she is staying with Farley’s family. When Ruth is well enough she will return home.

Here in their house, there is little trace left of dead loved ones, because authorities have burned their parents’ clothing in a bid to stop the spread of the disease. The only photos of their parents are on their voter ID cards. And the only reminder of Success is the two bottles of baby powder, still sitting on a table in the room.