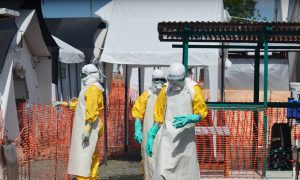 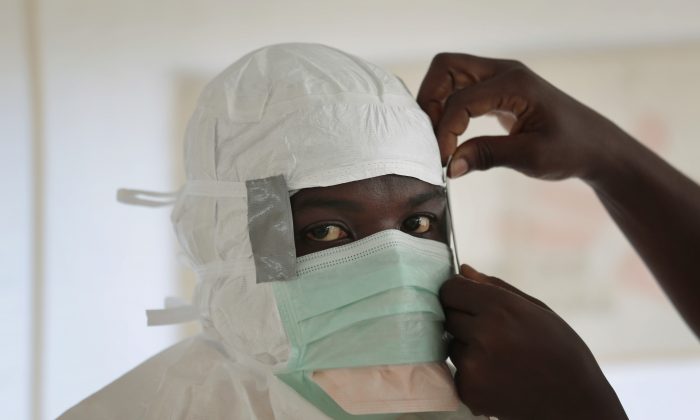 An MSF nurse is prepared with Personal Protection Equipment before entering a high risk zone of MSF's Ebola isolation and treatment center in Monrovia, Liberia, on Sept. 29, 2014. Six months into the worlds worst-ever Ebola outbreak, and the first to happen in an unprepared West Africa, the gap between what has been sent by other countries and private groups and what is desperately needed is huge. Even as countries try to marshal more resources to close the gap, those needs threaten to become much greater, and possibly even insurmountable. (AP Photo/Jerome Dela)
Africa

MONROVIA, Liberia—Liberian President Ellen Johnson Sirleaf on Sunday replaced her health minister as part of a broader Cabinet reshuffle amid widespread criticism of her government’s response to the country’s Ebola outbreak.

In a statement read on state radio, Sirleaf said Health Minister Walter Gwenigale would be replaced by George Warner, formerly head of the civil service.

“Dr. Gwenigale, who continues to have my full confidence, will continue to serve as adviser in the Ministry of Health and will continue to work with me on the presidential advisory Ebola committee until his planned retirement in February,” Sirleaf said.

Liberia has recorded more than 2,800 confirmed, probable and suspected deaths as a result of the Ebola outbreak, more than any other country, according to the latest figures from the World Health Organization. More than 14,000 cases and more than 5,000 deaths have been recorded in the three West African countries where the outbreak is concentrated — Liberia, Guinea and Sierra Leone.

Critics have accused Liberia’s government of conducting a heavy-handed but ineffective response, citing the harassment of journalists and unrest prompted by an attempt to quarantine the city’s largest shantytown.

Recently, though, fewer cases have been recorded, and Sirleaf announced last week that a state of emergency was being lifted. Schools remain closed, but officials are discussing how and when to open them.

Sirleaf, a co-winner of the Nobel Peace Prize, said in her statement Sunday that the government was working toward a goal of having zero new Ebola cases by Dec. 25. She also named a new public works minister, a new education minister and a new head of the state radio station.

“My hope is that this team will take us to the finish line, but make no mistake: As captain, I will not hesitate to change anyone who fails to meet our expectations,” she said.