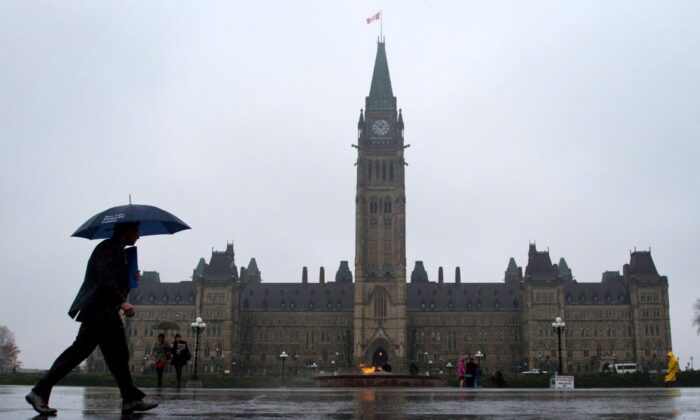 Pedestrians make their way across Parliament Hill in Ottawa in a file photo. (The Canadian Press/Sean Kilpatrick)
Canada

If the Liberals’ election platform is anything to go by, several pieces of controversial legislation that died when the election was called will be reintroduced when Parliament resumes.

The platform promised to, “within the first 100 days, reintroduce legislation to reform the Broadcasting Act to ensure foreign web giants contribute to the creation and promotion of Canadian stories and music.” This was attempted in the last Parliament through Bill C-10. The legislation initially exempted user-generated online content, but that clause was later removed. Opposition MPs and Trudeau-appointed Sen. David Richards feared the legislation could unduly curtail free speech.

Such legislation dovetails with the Liberal promise to “require digital platforms that generate revenues from the publication of news content to share a portion of their revenues with Canadian news outlets.” Similar legislation was introduced in Australia.

The bill creates new hate propaganda offences and restores the jurisdiction of the Canadian Human Rights Tribunal to hear cases on accused violations of Section 13 Charter offences. The legislation would also require platforms such as YouTube and Facebook to disclose their algorithms that filter content.

Nelson Wiseman, a political science professor at the University of Toronto, believes disputes over Bill C-10 and C-36 will continue in round two.

“If you’re going to do anything related to the internet, it’s going to be controversial because that controversy is swirling, not just here in Canada, but everywhere. Every government and society struggles with this,” Wiseman said in an interview.

“Whatever is in there, there’ll be debates over what its effect will be in practice.”

Robert Epstein, a behavioural psychologist in the United States who researches influence methods employed by Big Tech, told The Epoch Times that parts of the Liberals’ internet proposals are already proven failures.

He says that when Spain attempted to charge Google licensing fees for its news in 2014, “Google cut Spain off. That didn’t last long and then Spain backed off.”

“I’ve been a programmer almost my whole life. Algorithms are opaque even to the people who did the programming. We have large [research] teams working on programs—they’re absolutely opaque to anybody on the outside.”

The Liberals are also expected to launch another attempt to ban “conversion therapy,” defined in the former Bill C-6 as “practices, treatment or services designed to change an individual’s sexual orientation to heterosexual or gender identity to cisgender, or to reduce non-heterosexual sexual attraction or sexual behaviour,” including for children.

After the bill was introduced, some MPs raised concerns that such legislation could outlaw private conversations about gender and sexual behaviour between parents and children, or between children and guidance counsellors.

Bill C-22 proposed limiting or eliminating mandatory minimum sentences for drug crimes and some gun crimes. The platform promised to “reintroduce” similar legislation to curtail the overrepresentation of indigenous and blacks in the federal prison system. Two other justice bills, introduced but not debated this spring, may also be revived. These include Bill C-31 to allow incarcerated individuals with more than three indictable offences to apply for a pardon, and Bill C-23 to allow video technology to be used for jury selection and to make the use of telewarrants easier.

The Liberals will also reintroduce Bill C-32, “An Act for the Substantive Equality of French and English and the Strengthening of the Official Languages Act,” which, despite its title, makes French Quebec’s official language but not English.

‘They Need a Splash’

The government will offer more than recycled legislation, Wiseman said.

“They’re going to introduce stuff with a splash because they need a splash, because you can’t just go back into the House and pull up all those same pieces of legislation that never got through,” he said.

“The whole point of the speech from the throne is you got a fresh agenda here. That doesn’t mean that you’ve ditched the things that died, but now you’re adding things, things that are shiny, that are in the window, that are out there to keep the image of the government positive.”

“What if they decide to revise the Canada Health Act? That’ll get attention.”

Vaccination and health-care proposals fill the early pages of the Liberal platform. The document promised to revoke “charity status to anti-abortion organizations (for example, Crisis Pregnancy Centres) that provide dishonest counselling to women about their rights and about the options available to them at all stages of the pregnancy.”

The validity and implications of the proposal are unclear to Wiseman.

“Does this mean the Catholic Church loses its charitable status? And does it fit the allegation that it provides dishonest counselling?” he asks.

“‘Dishonest counselling’ is a very loose, meaningless sort of thing. … It will be controversial, because then you’ll have a big debate over different organizations, what it is that they’re actually doing. I don’t think it’s dishonest that anti-abortion groups, like the church, give counselling, [such as] ‘you’ve got other options.’ There’s nothing dishonest about that.”

In the English-language leaders’ debate on Sept. 9, Liberal Leader Justin Trudeau said there could be another election within 18 months if he did not get a majority. Wiseman expects the Liberals to make a second attempt at changing the Election Act before then.

“I doubt the Liberals will act on changing the method of election, which is first past the post, but they will make some other changes, including maybe the length of a campaign,” he said.

Among other promises are 10 days of paid sick leave for all federally regulated workers and an “anti-flipping” tax on residential properties “requiring properties to be held for at least 12 months” before being resold.