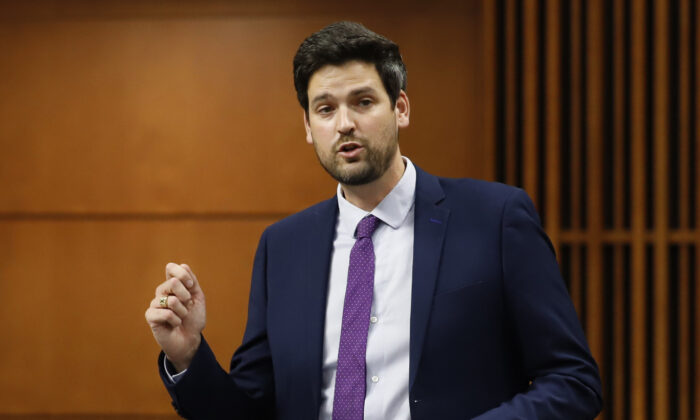 Minister of Immigration, Refugees and Citizenship Sean Fraser rises during Question Period in the House of Commons, in Ottawa on Nov. 26, 2021. (The Canadian Press/Patrick Doyle)
Canada

Liberals to Bring in 1.3 Million Newcomers Over Next 3 Years

The Liberal government aims to bring in more than 1.3 million new immigrants to Canada over the next three years despite having a backlog of 1.8 million applications waiting to be processed due to pandemic-induced delays.

Fraser said it is to fill critical labour market gaps the country is experiencing and to support a post-pandemic economic recovery.

“We are focused on economic recovery, and immigration is the key to getting there,” he said in a statement released on Feb. 14.

Immigration, Refugees and Citizenship Canada (IRCC) said immigration accounts for almost 100 percent of labour force growth in Canada, with 5 million Canadians set to retire by the end of this decade.

“The worker to retiree ratio will drop down to only 3:1. This is a clear sign that we have a strong economic need for increased immigration,” said IRCC in a press release on Feb. 14.

But critics have called on Ottawa to press pause on attracting more newcomers, and instead, prioritize the 1.8 million visa applications that have already piled up in the system due to slowed processing capacity during the COVID-19 pandemic.

The Canadian Immigration Lawyers Association (CILA) said the Liberals’ “ambitious” targets with the massive backlog may be ill-timed.

“CILA believes it would be in the immigration system’s medium- and longer-term interests for IRCC [Immigration, Refugees and Citizenship Canada] to use this year as an opportunity to reduce its backlogs and to continue to make the necessary technological investments and changes that will improve processing times and client experience moving forward,” the association said in a statement on Feb. 8.

In an article published on CILA’s website on Feb. 8, immigration lawyer Arlind Selimi said the backlog has far-reaching implications.

“The impact has spread from foreign nationals abroad awaiting for their opportunity to contribute to Canadian society, to future Canadian citizens unable to vote, and to permanent residents awaiting to renew their cards or re-unite with their loved ones. The plans of many temporary residents hoping to extend their stay or make their stay in Canada permanent have also been derailed.”

The IRCC announced on Jan. 13 that it will hire 500 more processing staff and modernize the processing through new digital platforms.

Fraser’s new plan includes resettling at least 40,000 Afghan nationals affected by the Taliban siege last August over the next two years. To date, more than 7,550 Afghan refugees have been resettled in Canada.