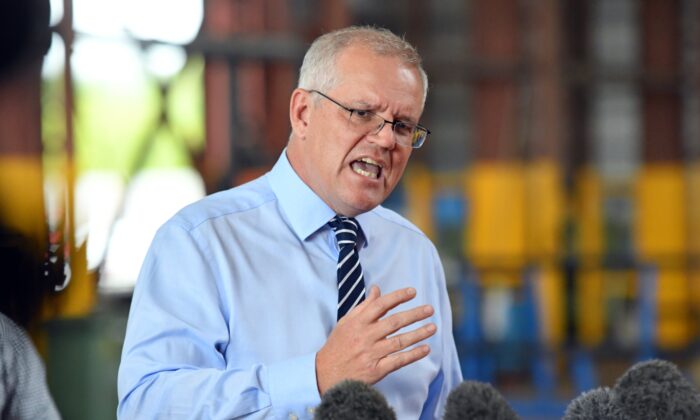 Prime Minister Scott Morrison at a press conference after visiting TEi engineering and steel fabrication company in the seat of Herbert, Queensland in Australia on April 26, 2022. (AAP Image/Mick Tsikas)
Australia

Big tech will be required to build enhanced safety controls into their devices that are easy for parents to use and hard for children to bypass, if Australia’s centre-right Coalition is returned to government.

Technology companies would need to create the safeguards for smartphones and tablets as part of a new federal eSafety package.

The eSafety Commissioner would work with Apple, Samsung, and others to design device settings and a binding code under the Online Safety Act.

If the industry does not create these controls within 12 months of the government being elected, it would move to force companies to comply with regulations.

Australian Prime Minister Scott Morrison, who is campaigning in Sydney on Sunday, has frequently spoken about online safety during his tenure.

“Our kids should be able to learn, be entertained or connect with their friends and family without facing abuse, humiliation or online predators,” he told Nine newspapers.

“The online world cannot be a coward’s cavern where the rules of the real world do not exist.”

In December, Morrison established a parliamentary inquiry into the effects of social media, saying at the time that parents had a right to be worried about whether big tech was doing enough to keep kids safe.

The government’s e-safety package also includes $23 million (US$16 million) to raise awareness of eSafety support in schools and provide teacher training and resources.

Some A$10 million (US$7.06 million) will also go to the eSafety Commissioner to make it easier for people to report online harms, by expanding co-ordination with other regulatory and law enforcement agencies.

Another A$2 million (US$1.41 million)has been earmarked for an online safety grants program to support women and girls in culturally and linguistically diverse communities.