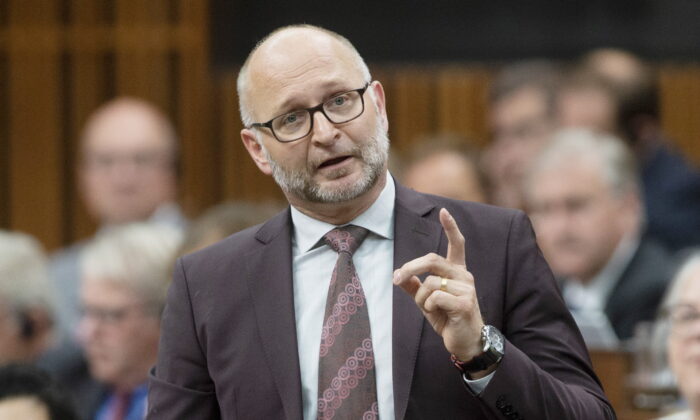 Justice Minister David Lametti responds to a question during question period in the House of Commons in Ottawa on June 17, 2019. (The Canadian Press/Adrian Wyld)
Canada

The federal government has tabled a new, tougher version of its previous bill to ban the practice of conversion therapy in Canada.

Bill C-4, tabled Nov. 29, expands on the previous iteration Bill C-6, which did not make it through the Senate and died with the dissolution of Parliament on Aug. 15 when the federal election was called.

Introduced by Justice Minister David Lametti, the proposed legislation would make “causing another person to undergo conversion therapy” a criminal offence with up to five years of jail time—going beyond C-6, which made it an offence only if it was practised on unconsenting adults.

Bill C-4 includes a broadened definition of what constitutes conversion therapy compared to its previous version.

The definition of conversion therapy would also include acts to “repress or reduce non-heterosexual attraction or sexual behaviour,” “repress a person’s non-cisgender gender identity” or “repress or reduce a person’s gender expression that does not conform to the sex assigned to the person at birth.”

The new bill proposes four new Criminal Code offences in total. In addition to “causing another person to undergo conversion therapy” the act of “removing a minor from Canada to subject them to conversion therapy abroad” would carry a maximum penalty of five years in prison.

Bill C-4 additionally gives the courts the power to “order that advertisements for conversion therapy be disposed of or deleted.” In some cases, the RCMP would be able to gather private communications, such as emails, to help prove that conversion therapy had taken place.

At a press conference on Nov. 29, Lametti said conversion therapy is “dangerous for everyone.” “These dangerous practices must end,” he said.

The bill has the support of the Bloc Quebecois, NDP, and the Greens, and a number of advocacy organizations have also spoken in favour of it.

No Conversion Canada said in a statement that Bill C-4 is the “most comprehensive legislation to date, with significant improvements over its predecessor Bill C-6.”

On the opposing side, the Association for Reformed Political Action Canada (ARPA), a grassroots Christian political advocacy organization that aims to bring biblical perspectives to civil authorities, says the new, broadened legislation will criminalize counselling for LGBTQ+ Canadians who want to reduce unwanted “non-heterosexual behaviour.”

“Bill C-4 proposes that this now be extended beyond children and minors so that even adults in the LGBTQ+ community will not be allowed to pursue counselling they desire.”

Critics raised concerns about the far-reaching definition of conversion therapy included in the original bill, saying it could criminalize casual conversations between parents and children or religious leaders and congregants.

The Conservative caucus was divided over Bill C-6 in the last Parliament. At its third reading on June 22, 62 Conservatives MPs voted against it, taking issue with the definition of conversion therapy. Conservative Leader Erin O’Toole was among the 51 Tory MPs who voted in favour of C-6.

Upon tabling the new bill, Lametti urged Conservative MPs who opposed the previous version to support the new one so it could move through Parliament “as quickly as possible,” adding the bill would not ban conversations about gender expression or gender identity.

Some Tory MPs spoke out against the bill in the previous Parliament, including Garnett Genuis.

“A school counsellor or parent telling a young person that they should wait till they’re older before becoming sexually active, for example, that could be considered conversion therapy according to the definition of conversion therapy in this bill—very clearly a flawed definition.”