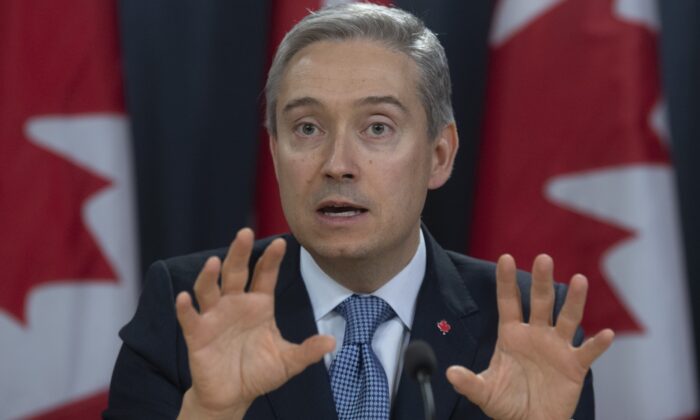 Foreign Affairs Minister Francois-Philippe Champagne responds to a question during a news conference in Ottawa on March 9, 2020. (Adrian Wyld/ The Canadian Press)
Canada

The Conservatives pressed the Liberal government on Tuesday to explain why a federal contract with a Chinese state-owned company that was flagged as a security threat was only cancelled after public backlash.

In July, high-tech Chinese company Nuctech was awarded a contract to install X-ray security equipment for 170 Canadian embassies, consulates, and high commissions around the world.

The deal raised immediate security concerns in light of the Beijing-based company’s close ties to the highest levels of the Chinese Communist Party (CCP), having been founded by the son of former CCP leader Hu Jintao, as well as being linked to the Chinese military. The contract was later cancelled, a parliamentary committee was told on Nov. 16.

“I find it unfortunate that the contract was cancelled only after Canadians brought pressure to bear, and that would have represented threats to the security of Canadians,” said Conservative MP Pierre Paul-Hus in question period on Nov. 17.

Minister of Foreign Affairs François-Philippe Champagne responded that “the contract was not approved” and was still at the bidding stage when Nuctech was dropped from consideration.

“At that point we said that national security took precedence and none of those products were purchased,” Champagne said. “Once we became aware of the situation we re-did the tender call. National security is always a criterion especially when it comes to security equipment.”

In July, the National Post reported that Nuctech’s $6.8 million bid had been successful, and Nuctech was chosen ahead of at least three Canadian companies—KPrime Technologies, Smiths Detection, and VOTI Detection—as well as California-based Rapiscan Systems. At least one of the companies, KPrime, had made a lower bid than Nuctech.

Paul-Hus asked Champagne whether the government could ensure there would be no further contracts signed “with the Chinese regime.” Champagne side-stepped the question but repeated that “national security is always the first criteria.”

Nuctech has also drawn criticism for alleged unfair business practices and corruption, including numerous allegations of bribery in Taiwan and Namibia. In 2010, the EU imposed a five-year tariff on Nuctech products for alleged dumping on the European market.

If the deal with Canada had gone through, it would have violated Ottawa’s own Integrity Regime, which says Canada can only do business with “ethical suppliers” that do not engage in bribery, fraud, or other dubious practices.

The government’s decisions around the Nuctech contract will be discussed at the Standing Committee on Government Operations and Estimates in a meeting on Nov. 18.

The Canadian International Trade Tribunal, which governs the government’s procurement process, has launched an inquiry into the Nuctech bid after a complaint was made by Calgary-based KPrime.