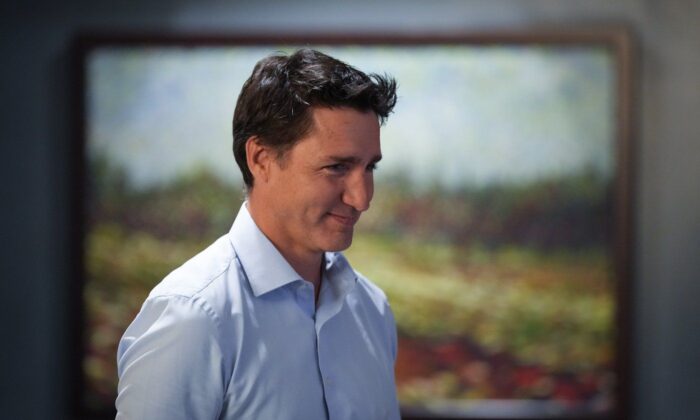 Prime Minister Justin Trudeau walks back to the meeting room after a break during the second day of a Liberal cabinet retreat in Vancouver on Sept. 7, 2022. (The Canadian Press/Darryl Dyck)
Canada

Prime Minister Justin Trudeau was set to tell Canadians about new measures to help with the rising cost of living Thursday, but the announcement has been delayed.

News of the death of Queen Elizabeth II Thursday afternoon interrupted the plan to reveal details of the changes as the Liberal cabinet met in Vancouver, and it’s now unclear when the announcement will happen.

Before the delay, two sources familiar with details of the plans spoke to The Canadian Press on the condition they not be named in order to discuss matters that are not yet public.

The three-day cabinet retreat, which ends Thursday night, comes as the government prepares for the fall sitting of Parliament with a new Conservative leader.

The meetings are heavily focused on the economy and the cost-of-living crisis.

The NDP sees the announcement as an enormous victory stemming from the supply and confidence agreement it reached with the Liberals last winter.

Part of that agreement saw the Liberals promise to move on key NDP demands, including dental care and an expanding housing allowance. Both were included in the budget in April but have not yet been rolled out.

The sources say the dental care program will allow parents of children under the age of 12 to apply for a $650 payment to cover dental expenses this year and again next year while a more formalized program is developed.

The rental allowance will include a $500 one-time top-up to the Canada Housing Benefit.

The Liberals budgeted $300 million for dental care in this fiscal year and $475 million for the housing allowance.

NDP Leader Jagmeet Singh has made it clear that not moving on those priorities could kill the pact that will ensure his MPs support the Liberal minority government on key votes until 2025.

Singh has also been asking for top-ups to the GST rebate and Canada Child Benefit, but neither were included in the March agreement.

The sources say there will not be any adjustments to the Canada Child Benefit in this announcement, but the government is going to double GST cheques for the next six months.

Canadians with low and modest incomes based on their annual tax filings receive a cheque every three months as a type of rebate on some of the GST they pay.

The payments are indexed to inflation but the increase this year is based on inflation in 2021, which means payments for the GST credit and most other federal benefits went up 2.4 percent.

Inflation averaged more than twice that in the first seven months of 2022.

Trudeau kicked off Wednesday’s cabinet meeting with a speech acknowledging there are big challenges facing Canada and the world, but saying he is energized to keep going and bring about the solutions the Liberal government is planning.

His comments, confirmed to The Canadian Press by two sources with knowledge of what was said, matched his repeated assertions publicly and privately that he has no intention of stepping down before the next election.

Ministers were briefed at their meeting Wednesday afternoon by Michael Sabia, the deputy minister of finance, along with private-sector economists who helped paint a picture both of Canada’s economy and inflationary pressures, and the global situation.

Finance Minister Chrystia Freeland said Wednesday there would be discussions around the table about how best to help Canadians most feeling the pinch of inflation, but without disrupting the federal fiscal balance.