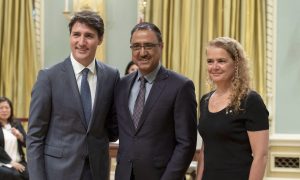 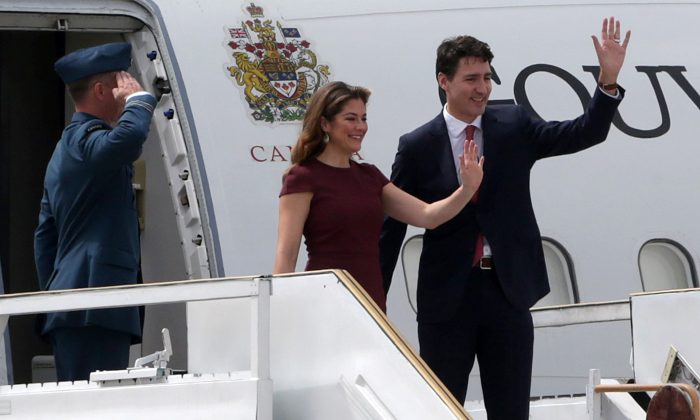 Canadian Prime Minister Justin Trudeau and First Lady of Canada Sophie Gregoire Trudeau wave as they get off a plane on their arrival to Buenos Aires for G-20 Leaders' Summit 2018 at Ministro Pistarini International Airport in Ezeiza, Buenos Aires, Argentina on Nov. 29, 2018. (Daniel Jayo/Getty Images)
Viewpoints

There is an old saw that the Opposition doesn’t defeat governments; governments defeat themselves.

The Canadian Liberal Party appears to be making a major effort to transmute this hoary maxim into a current political reality.

Or, from another optic, Liberals are learning charisma’s limits with Prime Minister Justin Trudeau adding a chapter to “The Man Who Fell to Earth.”

Although Americans may believe otherwise, the proximate North American election is scheduled for October in Canada.  Normally, a first term government secures a second mandate without difficulty.

Almost never has a Canadian government been jettisoned after a single term, the last being Joe Clark’s Conservatives defeated in 1980 after less than a year in office.  Consequently, analysts heralded Trudeau’s smashing majority 2015 victory as the first in a prospective string of victories by Canada’s “natural governing party.”

But Liberals entered office lugging a heavy load of promises, many of which have proved problematic:

What has resulted, however, is a comedownance for Liberals.

Specifically, the commitment to end “first-past-the-post” national elections has been scuttled as no alternative system proved politically viable.

Eliminating the federal deficit has been abandoned with massive spending, theoretically to use low-interest loans for long term infrastructure projects.  No date for the “balanced budget” is extant.

Canadian defense/security policy has retreated from high profile activities.  Nominal NATO leadership roles (a battle group in Latvia) are peripheral to real performance.  A review of options to replace archaic fighter jets (while avoiding the F-35) seem designed to be completed about 2050; replacement of rusting out major naval vessels leaves a “next century” impression.

Emphasizing “peacekeeping,” Canada committed in 2016 to assisting peacekeeping organizations—and then began searching for one that would avoid any “body bags.”  After two years, the mountain labored and produced—Mali.  A token force of helicopters/support arrived in August and has done essentially nothing in the ensuing six months; it will depart in July, Trudeau having rejected requests to extend the mission.

And Trudeau has made unforced errors.  The federal ethics commissioner found him guilty of breaking conflict of interest laws by his 2016 winter holiday vacation to the Aga Khan’s private island.  His February visit to India with “Mr. Dressup”-style appearances in ethnic costume prompted global ridicule for “over-the-top” activity devoid of substantive accomplishment.  And accusations of groping a BC female journalist in 2000, surfacing in July, eventually extracted a half-hearted apology from a self-described “feminist” who defenestrated Liberal MPs for comparable actions.

At this juncture, Trudeau’s strongest card is Opposition weakness.  Conservatives, led by Andrew Scheer, are uninspiring.  Trudeau and Scheer are close in polls, but Trudeau’s numbers are lower than former PM Harper at the same point in his mandate.  Moreover, Scheer is being undercut by Maxime Bernier, who broke with Scheer to found a more libertarian, Quebec-based, People’s Party of Canada in September.  So far it has demonstrated no political traction but could steal Tory votes in key ridings.

Separately, the NDP appears in free-fall as its Sikh-Canadian leader, Jagmeet Singh, has failed to connect with NDP constituents outside Toronto.  Analysts predict dissatisfied NDP voters will back Liberals to Tory detriment.

For Canadians, Trudeau’s “courtship” passion is over; the first excitement of “marriage” has passed; now the question is whether they will stay together “for the children.”  (And Trudeau still has great hair, lovely wife, and charming children.)