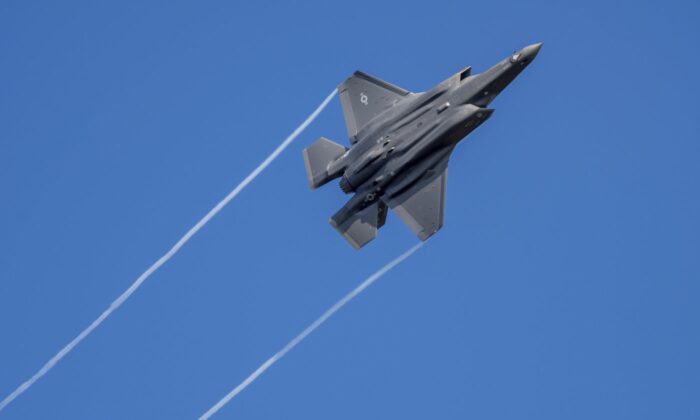 The Liberal government is expected to announce today it will enter into final negotiations on purchasing the F-35 fighter jet.

Government and industry sources have told The Canadian Press the negotiations with manufacturer Lockheed Martin will be announced at a news conference this afternoon.

The sources spoke on condition they not be named because they were not authorized to comment publicly.

While this doesn’t mean a deal to purchase the stealth fighter is officially done, it does mean Canada is on the verge of finally choosing a replacement for its aging CF-18s.

Should negotiations fall through, the government retains the option to enter into talks with Saab, whose Gripen fighter came second to the F-35 in the competition.

Canada is planning to buy 88 new fighter jets to replace its CF-18s, with the government having budgeted up to $19 billion for the purchase.

Government officials told a parliamentary committee last week they were hopeful a final contract to purchase Canada’s next fighter jet would be completed by the end of the year, with delivery of the first aircraft slated for 2025 and the last around 2032.

The move into final negotiations for the F-35 brings Canada’s search for a new fighter jet full circle, and will no doubt prompt questions about whether Ottawa should have pressed ahead with its original deal a decade ago.

Stephen Harper’s Conservative government committed to buying 65 F-35s without a competition in 2010, before concerns about the stealth fighter’s cost and capabilities forced it back to the drawing board.

The Liberals promised in 2015 not to buy the F-35, but to instead launch an open competition to replace the CF-18s. They later planned to buy 18 Super Hornets without a competition as an “interim” measure to ensure Canada had enough aircraft until permanent replacements arrived.

Some at the time questioned that plan, suggesting the Liberals were trying to find a way to lock Canada into the Super Hornet without opening itself up to a legal challenge from Lockheed Martin or any other jet makers.

But the government cancelled the plan after Boeing launched a trade dispute with Montreal aerospace firm Bombardier over the latter’s C-Series planes. Ottawa initiated the current bidding process in July 2019, at which point both the Super Hornet and F-35 were allowed to compete.

Meanwhile, the government has been forced to invest hundreds of millions of additional dollars into the CF-18 fleet to keep it flying until a replacement can be delivered. By 2032, the CF-18s will have been around for 50 years.

Since the formal competition was launched, the F-35 has been considered the front-runner.

Canada has contributed US$613 million into the F-35’s development since 1997, with another multimillion-dollar payment due in the coming weeks. The stealth fighter is being used by the U.S. and many other allies.

Many observers had seen the Boeing Super Hornet and F-35 as the only real competition because of Canada’s close relationship with the United States, which includes using fighter jets together to defend North American air space on a daily basis.

Those perceptions were only amplified after two other European companies dropped out of the competition before it even started, complaining the government’s requirements had stacked the deck in favour of their U.S. rivals.

In particular, both Airbus and Dassault had complained about what they saw as onerous requirements associated with adapting their aircraft—the Eurofighter and Rafale respectively—to meet Canada’s intelligence-sharing requirements.

Those requirements included ensuring their aircraft could integrate with the top-secret Canada-U.S. intelligence network known as “Two Eyes,” which is used to defend North America.

Sweden is not a member of NATO or Norad, the joint Canadian-American defence command responsible for protecting the continent from foreign threats. That had prompted questions about the Gripen’s compatibility with U.S. aircraft.

Airbus, which dropped out of the running in August 2019, also expressed frustration over the government’s decision to change a long-standing policy that requires bidders on military contracts to legally commit to invest in Canada.

Many were therefore surprised when Boeing was kicked out of the competition in December, setting the stage for a final dogfight between the F-35 and Gripen.