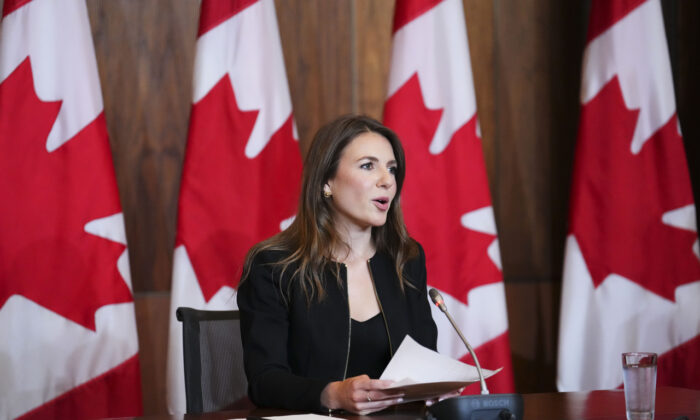 The Conservatives’ public safety critic says recently released government documents show that the threshold to invoke the Emergencies Act to clear the Freedom Convoy protests wasn’t met and that the federal government was wrong to use the act.

“The government was advised that negotiations were on the cusp of proving effective but instead invoked the emerg act, which eliminated the possibility of a peaceful resolution,” Raquel Dancho, Conservative MP and her party’s shadow minister for public safety, said in a social media post on Aug. 12.

“If the govt would have given protestors some dignity and showed compassion, there could have been a peaceful resolution. Instead, the Liberals brought down the sledgehammer, smashed charter rights, and treated protestors like second-class citizens not worthy of their time.”

The government was advised that negotiations were on the cusp of proving effective but instead invoked the emerg act, which eliminated the possibility of a peaceful resolution.

Dancho’s remarks are in response to the recently released documents showing how cabinet formed a response to the three-week protest in Ottawa’s downtown core, in place since late January, as well as several blockades held at some Canada-U.S. borders crossings. The protesters were calling for an end to federal COVID-19 vaccine mandates and restrictions.

The documents were released after civil liberties groups requested that the attorney general disclose the files relating to the government’s decision to invoke the Emergencies Act. The documents, heavily redacted, include minutes from three meetings of the Incident Response Group (IRG), a committee of federal ministers and senior officials chaired by Trudeau.

It also includes minutes from a cabinet meeting on Feb. 13, a day before Prime Minister Justin Trudeau invoked the Emergencies Act. During the meeting, his national security and intelligence adviser Jody Thomas briefed cabinet on the protest in Ottawa and the border blockades at several Canada-U.S. border crossings held in solidarity with the convoy, saying that one major blockade at the Ambassador Bridge, which connects Windsor, Ontario, and Detroit, Michigan, was being lifted after the police began making arrests a day earlier.

In addition, minutes from the Feb. 10 IRG meeting show that the negotiations between the protesters and the Ontario Provincial Police (OPP) were making progress.

“Public Safety Canada reported on a conversation with the lead negotiator (OPP) who noted that in Ottawa, approximately 80 % of protestors had a weak connection to the cause, 5 % had a strong devotion to it, and 15 % were a swing factor,” according to the minutes. “The negotiator suggested that the leaders of the protest could potentially be encouraged to leave and denounce the blockade in exchange for a commitment to register their message with the Government.”

But on Feb. 14, Trudeau declared invocation of the emergency order, giving the police additional powers to clear out the demonstration, including powers to compel towing companies to remove the trucks and vehicles parked in Ottawa’s downtown core.

Dancho said the evidence from the documents prove that “the emergency act invocation threshold wasn’t met and that the Liberals were therefore wrong to invoke it.”

“So the govt knew these were not largely a bunch of ‘dug in’ extremists or insurrectionists. With proper negotiations, 95% could have been persuaded to leave. The remaining 5% of diehards could have reasonably been handled through police operations using existing powers,” she said.

Dancho’s colleagues in the Conservative Party also spoke out against the Liberal government for “pulling the trigger” rather than continuing with the peaceful negotiation.

“It was never about safety,” said Pierre Poilievre, MP and Conservative Party leadership candidate, on Tiwtter. “Trudeau only wanted to punish protesters for making him look bad.”

His opponent Leslyn Lewis also pointed to Trudeau’s previous claims that invoking the act was a “last resort,” which she said is now proven otherwise.

“The Liberals said they acted on the the advice of law enforcement. We know that wasn’t true,” Lewis wrote on social media. “Justin Trudeau called the Emergencies Act a ‘last resort’, but now we learn he was told by security advisors that they were close to a breakthrough the day before he implemented the act.”