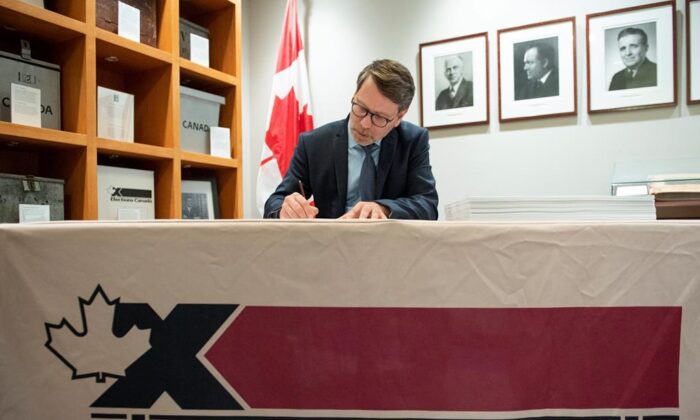 OTTAWA—The body in charge of administering Canada’s elections was taken by surprise by this week’s announcement that there could be major reforms coming to the way people vote, including a three−day−long polling day.

The Liberal−NDP confidence and supply agreement, announced on Monday, said the government would work with Elections Canada to explore ways to make it easier for people to vote, including possibly extending election day to three days.

It comes just weeks before Stéphane Perrault, the chief electoral officer, is poised to present a detailed report on the 2021 election to Parliament, with recommendations for improvements in the future.

The text of the Liberal−NDP accord also said the government would explore improvements to the way mail−in ballots are processed, and consider allowing people to vote at any polling station in their riding.

At the last election, some voters complained their mail−in votes were not counted because they did not arrive on time or were lost.

Elections Canada said in a statement it “had no prior knowledge of the Liberal party and New Democratic Party commitments related to the agency’s mandate.”

Perrault, who is in charge of administering Canada’s elections, has been busy preparing his own recommendations for improvements.

“For any future changes to the (Elections) Act, it will be important to take time to properly consider their potential implications for the administration of future elections,” said Matthew McKenna, a spokesman for Elections Canada. “The (chief electoral officer) would look forward to discussing those possible changes with parliamentarians, and sharing his expertise about the administration of federal elections.”

NDP MP Blake Desjarlais, who won his Edmonton seat from the Tories after working hard to boost voter turnout in the riding, said three−day polling would benefit many voters, including working−class people with multiple jobs who might find it hard to carve out time to vote.

He said expanded polling is “appropriate considering how large our country is,” adding that many Canadians fly to get to work and might not be home on a single polling day.

“We have seen apathy at an all−time high,” he added. “We need to combat apathy in this country and restore trust in our democratic institutions.”

In October 2020 Perrault gave evidence to a Commons committee about extending voting days in a pandemic election.

He told MPs that an entire weekend could be devoted to voting, but said it would be tricky to find large numbers of people to staff polling stations on Monday as well. He also said that some polling stations might not be available on Monday.

The chief electoral officer also suggested that advance voting could be held on the Thursday and Friday before an election weekend, so there are two days of advance voting during the week.

Perrault’s report to parliament on the most recent election is expected to contain proposals to stop hate groups from getting tax breaks and lists of voters’ names and addresses by registering as political parties.

The safeguards would make it harder for extremists to gain access to benefits, including broadcast time, designed for political parties.

Recommendations on making it easier for Indigenous voters to vote — after it emerged that some First Nations did not have access to polling stations on election day — will be included in a separate Elections Canada report.