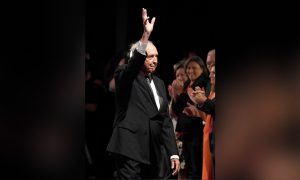 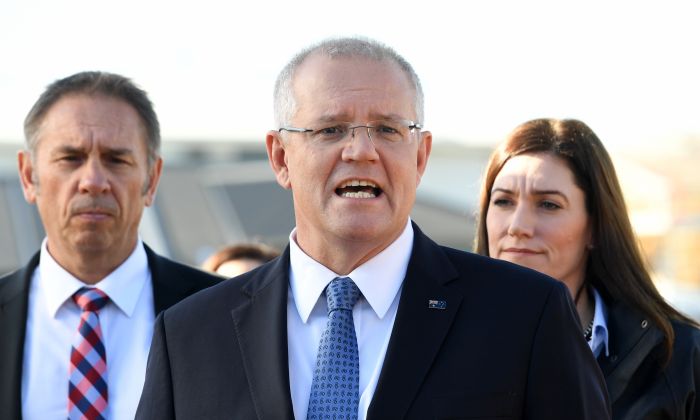 Australian Prime Minister Scott Morrison speaks to media with Federal Member for Boothby Nicolle Flint (R) at a building site in Oaklands Park, the seat of Boothby on May 14, 2019 in Adelaide, Australia. (Tracey Nearmy/Getty Images)
Australia

Federal coalition MP Nicolle Flint has said she will not recontest her South Australian seat of Boothby and will quit politics at the next election, with senior Liberals paying tribute to her strength in the face of bullying.

The second-term Liberal MP and deputy whip has been vocal about problems facing women in Parliament, calling out what she described as sexist “rubbish” they too often were forced to deal with.

Senator Simon Birmingham, the most senior South Australian in the government, referred to the treatment of Flint in thanking her for her service.

“Since 2016 Nicolle has been a committed and strong voice for the people of Boothby,” he said in a statement. “Enduring the most grim of election battles in 2019, Nicolle’s unwavering strength and devotion to her community saw her rise above the unsavoury actions of others.”

“The public attention from being a parliamentarian does sometimes attract unacceptable behaviour, and I have admired Nicolle’s efforts to stand against the bullying and nastiness of particular groups and individuals,” Morrison said. “I wish her all the best for what comes next.”

Flint did not outline the reasons for her decision, but promised to continue working hard for her electorate until the election.

“It has been an honour to represent the people of Boothby over two terms and I am grateful to them, and to my Liberal Party members, for giving me this opportunity,” Flint said in a statement.

Flint’s Boothby electorate is held by a margin of 1.4 percent.