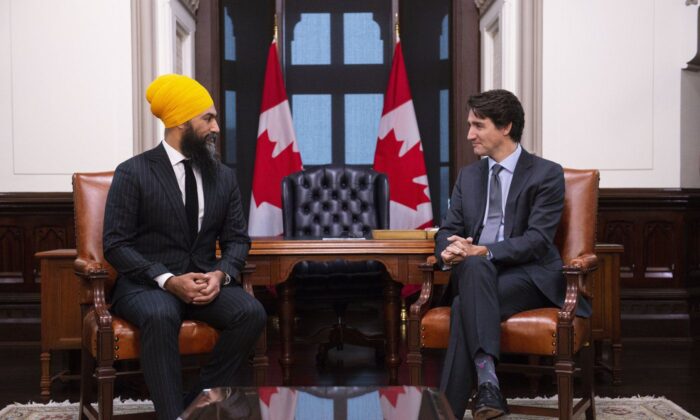 Liberal-NDP Alliance: A Marriage of Convenience, but at What Cost?

The alliance announced by Prime Minister Justin Trudeau and NDP leader Jagmeet Singh is a bold one.

Strategically, one can see the merit in the plan. Canadians are exhausted after years of a pandemic and constant political instability. After a general election that barely moved the needle in the balance of power in Ottawa, it can be safely assumed that voters aren’t in the mood for change. The thought of being able to avoid another election until 2025 surely holds appeal for many people.

Can this alliance really last that long though, and will it be worth the price?

The price for Canadians is high when it comes to literal spending. The Trudeau government has never been what one would call frugal. Balanced budgets have never been a consideration for them. But the commitment to embracing national dental care, pharma care, and expanding affordable housing initiatives to form their alliance with the NDP will expand program spending commitments well beyond anything expected from even this government.

The rising cost of living has been a top issue with Canadians for some time now, though pandemic surges put that concern into second place in the polls on occasion. Energy, food, and housing costs are all rising at a pace unseen in decades. New federal program spending is going to have to be funded through either tax increases or taking on more government debt. The former will hit citizens directly, while the latter will do so indirectly through inflation.

Canadians may not respond well once they realize the price tag attached to the Liberal-NDP alliance. How much is it worth to them to avoid elections?

The alliance between Trudeau and Singh is a fragile one. Both leaders have surely had to face down members in their own caucuses who were opposed to this partisan union. Those internal opponents will be quick to pounce if the agreement appears to be cracking in any way.

Singh already lost a lot of credibility with his core supporters when he joined Trudeau in supporting the implementation of the Emergencies Act only to have it repealed less than two days later. If economic reality forces the Trudeau government to hold back on the delivery of any of their promises, Singh will be under heavy pressure to break off the alliance.

If increased program spending harms the Liberal government at the polls, Liberal MPs may start pushing back against Trudeau’s leadership. Loyalty will only go so far for many MPs when they see their own chances of re-election being put at risk. Internal cracks were already starting to show in the Liberal caucus when Liberal MP Joel Lightbound called out Trudeau for his management of the pandemic.

Some Liberals are tiring of Trudeau’s leadership, and if it appears that the alliance with the NDP is harming the party fortunes, some may conclude it is time to seek new leadership. Trudeau has led the party for nearly a decade now, and the ambitious within the ranks are starting to chafe.

Ironically, a surge in support for either the NDP or the Liberal Party would likely lead to an end to the alliance between them as well.

The Liberals desperately want to get back into a majority governing position and they will call an election without hesitation if it appears that they could win a majority.

The NDP has already swallowed a lot of pride in supporting the Liberals. The best the party can tend to hope for is to hold the balance of power, but they also like to see themselves as a party of conscience who will hold the government to account. If events occurred where the NDP appeared poised to gain ground in an election, they will be tempted to invoke a confidence vote. This could show their base that they will still stand on points of principle and could return to Ottawa in a strong position.

An unintentional side effect of the Liberal-NDP alliance is that it will buy some breathing room for the Conservative Party of Canada as they let a new leader settle into the role this fall. Governments often call snap elections when opponents select new leaders but that is unlikely to happen this time.

The unity between the Liberal Party of Canada and the NDP is a marriage of convenience at best. There are some fundamental, ideological differences between the NDP and the Liberals and they will only be able to suppress those differences for so long.

Trudeau and Singh’s close relationship will probably last for a year or two but it will be very unlikely to hold together until 2025. The question is, how much of the NDP agenda will be enshrined before it falls apart?