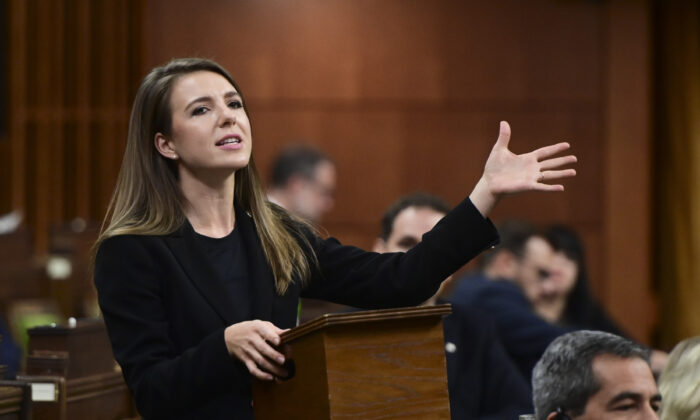 Liberal MPs pushed back against a motion calling on the public safety minister to set a date before the Christmas break for the government to announce its long-delayed decision on whether to ban Huawei from Canada’s 5G infrastructure.

The motion was introduced by Tory MP Raquel Dancho during a meeting of the Liberal-dominated Standing Committee on Public Safety and National Security on Dec. 14.

“For over three years, security experts, allied countries, the House of Commons, and Canadians have called on your government to act on the serious national security concerns and ban Huawei from Canada’s 5G infrastructure,” Dancho said.

Canada’s allies in the Five Eyes—an intelligence alliance consisting of Australia, Canada, New Zealand, the United Kingdom, and the United States—have all either banned or severely restricted the Chinese telecom company’s participation in the construction of their 5G networks amid national security concerns due to Huawei’s close ties with the Chinese regime.

“We are the outlier in the Five Eyes of banning Huawei from our 5G infrastructure and from infrastructure for telecommunications across Canada,” Dancho said.

“We need to be leaders to ensure that our telecommunications are protected, that Canadians are protected. This is a national security issue and it is a grave concern to opposition and opposition parties that the government is not being a leader on this.”

Several Liberal committee members spoke against the motion, then voted to adjourn the meeting before it could be put to a vote.

“I don’t think we should be supporting this motion,” Liberal MP Pam Damoff said, citing the government’s ongoing security review.

“I think we’re dealing with national security issues and the development of the 5G network in Canada and I think that the national security agencies need to be involved and recognize other countries have made decisions on 5G.”

Liberal MP Sameer Zuberi told the committee that forcing the issue isn’t necessary because a decision is “around the corner.”

“We have seen clear signals from the government saying that there will be a decision that’s imminent and forthcoming,” Zuberi said.

“The language around the timing of this decision is whittling down, and for that reason I trust that that decision is around the corner. And for this reason, I won’t be supporting this motion.”

Dancho noted that Prime Minister Justin Trudeau promised on Sept. 28 that the government would make the final decision on whether to ban Hauwei “in coming weeks,” yet no decision has been forthcoming two and a half months later.

The Liberals previously delayed the decision to ban Huawei due to concerns about the safety of the Canadians Michael Kovrig and Michael Spavor who were imprisoned in China. The two men were released and returned to Canada in September.

Meanwhile, in the years since the government began mulling a ban, Huawei has sold equipment worth hundreds of millions of dollars to two of Canada’s largest telecom corporations—Bell and Telus—which are now seeking compensation from public money if a ban would require them to remove and replace the technology.

“There are clear indications that the Huawei company is taking advantage of the government’s indecision and we’re increasingly concerned that this will threaten the longevity and the security of our telecommunications, and therefore the national security of each individual Canadian,” Dancho said.

The motion recommended the government “reject the requests for compensation from Canada’s large telecommunication companies” and “inform the committee of the date on which a decision will be made on Huawei before year-end.”

Several MPs on the committee said they supported Dancho’s motion.

“It’s becoming quite a farce,” Conservative MP Dane Lloyd said. “If the government does not want to make a decision on this, then they should be clear with Canadians … so that everyone can plan accordingly.”

NDP MP Alistair MacGregor said he supports the motion and that the legislative committee must hold the government accountable.

“We have been awaiting a sense of direction from the government on [the Huawei ban]. It has consumed the media for a number of years, and many people in Canada just are not sure why we continue to have a delay on this,” MacGregor said.

Bloc Quebecois MP Kristina Michaud said “it’s more than time for the government to make a decision and that informs the house. We’ve been asking for this for over a year. So I am for this function.”

While members of the committee did not vote to directly defeat the motion, another motion from Liberal MP Ron McKinnon adjourned the committee meeting, ending further debate on the issue.