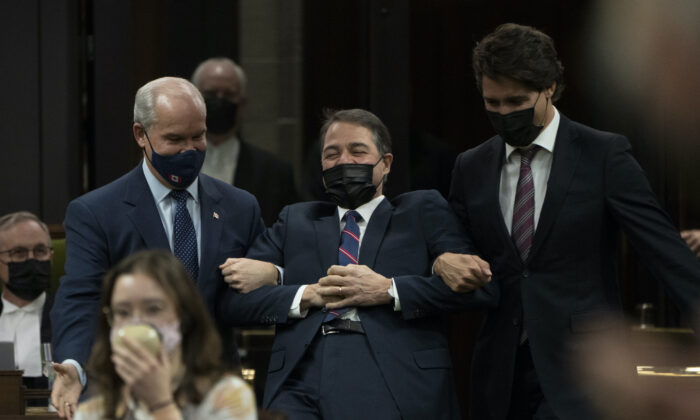 Anthony Rota jokingly fights being escorted by Prime Minister Justin Trudeau and Conservative Leader Erin O'Toole to the Speaker's chair after being elected as the Speaker of the House of Commons in Ottawa on Nov. 22, 2021. (The Canadian Press/Adrian Wyld)
Canada

Liberal MP Anthony Rota Re-Elected as Speaker of the House

The first order of business for the 44th Parliament was the election of a House Speaker, and Liberal MP Anthony Rota was re-elected to that position, which he also held in the last Parliament, beating out six other candidates.

“I am very honoured to be up here, both politically and personally,” Rota said after being escorted to the throne by Prime Minister Justin Trudeau and Leader of the Official Opposition Erin O’Toole.

“This is something that I know I will treasure for the rest of my life. And I guess one of the good things about being Speaker is I probably upset both sides equally, so I appreciate you,” Rota said.

Party leaders all congratulated Rota on his appointment.

“There will be moments when we will get caught up in heated debate and when that happens we will have you, Mr. Speaker, to guide us back on track,” Trudeau said.

“You’ve been able to preside through a difficult time of our pandemic, making sure the light of our democracy did not flicker during this time,” said O’Toole.

Bloc Québécois Leader Yves-François Blanchet and NDP Leader Jagmeet Singh both said Rota’s re-election demonstrates that he has the confidence of the House.

With the last Parliament having worked in a hybrid format since May 2020, with some MPs participating remotely due to the pandemic, the House of Commons looked remarkably full for its opening session on Nov. 22.

While the Conservatives and the Bloc are against the continuation of hybrid sittings, the Liberals, NDP, and Greens want to maintain the format where some MPs can join the sessions virtually.

As the Speaker presiding over the House during the pandemic, Rota experienced many “firsts” as the format of the legislature was changed to allow remote participation.

“During the 43rd parliament, my primary focus was unexpectedly to ensure that the House of Commons remained operational,” Rota said in his candidacy speech. “And that parliamentary work continued amidst the challenges of the global pandemic. It was a massive technical undertaking.”

As the Speaker, Rota was also at the centre of the demands of the majority of MPs who wanted more disclosure from the minority Liberals about two scientists who were fired from a high-security government laboratory in Winnipeg. The scientists sent deadly virus samples to China, and collaborated on research projects with members of the Chinese military.

The Liberal government took court action to prevent the disclosure of further documents, and named Rota as respondent in its court application.  The government dropped the case following the dissolution of Parliament after an election was called in August.

The issue could be back in the current Parliament as opposition parties maintain their request for disclosure.

O’Toole alluded to the issue in his speech congratulating Rota.

“I want you Mr. Speaker to continue your work standing up for our democracy, not just to make sure we could participate in debates during the pandemic, but that the will of Parliament was defended in court in Canada, Mr. Speaker. It was an example … of your leadership and your loyalty to the House of Commons,” O’Toole said.

While the Speaker may be elected to the Parliament under the flag of a political party, he must fulfill his duties impartially. Some of the functions of the Speaker include maintaining order, defending the rights and privileges of MPs, and ensuring the flow of House business.

Bloc Québécois MP Louis Plamondon, the longest sitting member of the House who was first elected in 1984 as a Progressive Conservative, presided over the Speaker’s election as per protocol, and cracked a few jokes in the process.

Plamondon, 78, said if Joe Biden, who was 78 when he became U.S. president, can be in charge, Plamondon can certainly still represent his riding as well. He also joked that when he was elected in 1984 there were no cellphones, no internet, and no fax machines.

“It was a whole other world, a paradise,” he said.

The next order of business for Parliament will involve Gov. Gen. Mary May Simon formally opening the session in the Senate on Nov. 23.