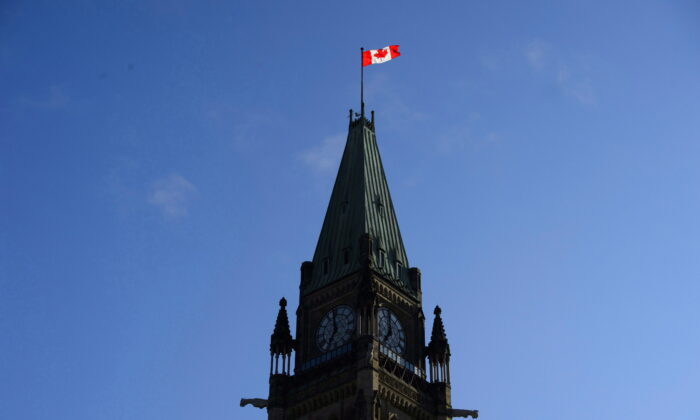 The Peace Tower on Parliament Hill in Ottawa in a file photo. (The Canadian Press/Sean Kilpatrick)
Canada

While the Liberal government of Jean Chrétien is known for reining in the steep deficits of the 1990s, today’s Liberal government is the only one since 1900 to increase per-person debt without facing a world war or recession, says a new study by the Fraser Institute.

The study looks into the debt legacies of all Canadian prime ministers since the Confederation, calculating the percentage change in gross federal debt per person for each head of government after accounting for inflation and population changes. Gross federal debt is the total amount of financial liabilities, including employee benefits (pension), debt and interest, and accounts payable.

The study found that Prime Minister Justin Trudeau is one of three Canadian prime ministers whose government increased the per-person debt absent a world war or recession, with a 5.6 percent hike. The other two were John Abbott (1891–92) at 4.7 percent and Mackenzie Bowell (1894–96) at 0.7 percent.

A previous Fraser Institute study found that under Trudeau, the federal government’s spending on public programs reached over $9,000 in 2019, the highest compared to all prime ministers, including those facing war or recession.

Chrétien inherited a large deficit when he became prime minister in the 1990s due to debt accumulated by past governments. A 1995 Wall Street Journal article said Canada’s state of the economy had made it “an honourary member of the Third World.” Chrétien, however, undertook fiscal reforms and reduced government spending significantly.

“Government debt matters—more debt means more tax dollars are diverted away from important public programs to pay interest, and it leaves future generations on the hook for today’s spending,” study co-author Jake Fuss, a policy analyst with the Fraser Institute, said in a statement.