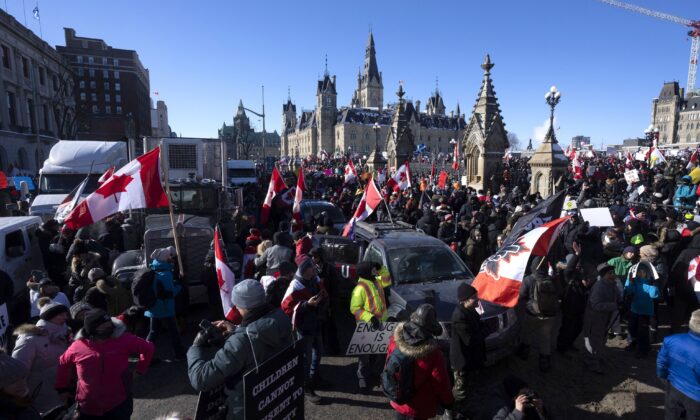 Protesters stand on the back of a truck during the Freedom Convoy demonstrations against COVID-19 vaccine mandates and other restrictions on Parliament Hill in Ottawa on Jan. 29, 2022. (The Canadian Press/Adrian Wyld)
Canada

The Liberal government has agreed to release the cabinet documents it used to justify invoking the Emergencies Act after a request made by the Public Order Emergency Commissioner.

The head of the Public Order Emergency Commission, Paul Rouleau, had requested that the Liberal government waive cabinet confidence—the privilege to protect the disclosure of discussions between federal cabinet ministers—to provide the commission with the relevant documents they used in the decision to invoke the act.

“This exceptional step recognizes the fundamental importance of the Commission’s work and how critical these documents are in inquiring into why the Government declared a public order emergency,” the commission’s co-counsels Shantona Chaudhury and Jeffrey Leon said in a June 28 statement.

“On behalf of Commissioner Rouleau, we took the position that Cabinet documents must be released to facilitate the Commission’s examination and assessment of the basis for the Government’s decision to declare the emergency and fulfill the Commission’s mandate.”

According to the statement, this is only the fourth time since Confederation that a federal commission of inquiry has been given access to cabinet confidence.

After the act was invoked, police carrying batons and anti-riot guns shut down the remaining demonstration in Ottawa and arrested protestors. The act also gave authorities the power to force towing companies to remove trucks and vehicles parked in Ottawa’s downtown core.

Financial institutions were also instructed to freeze the bank accounts of individuals and companies suspected of donating to the convoy without the court order usually required to do so.

The government has now committed to providing the commission with the information cabinet had when it decided to declare a public order emergency. The Liberals had previously argued that the documents were protected under cabinet confidence.

As required by the Emergencies Act, the Governor in Council established the Public Order Emergency Commission on April 25, to conduct an independent public inquiry into the government’s emergency declaration. The inquiry must submit its final report to the government, with findings and recommendations, by Feb. 6, 2023.

The commission said it has not yet received cabinet documents but expects them to be delivered shortly.

In a separate statement on June 28, the commission announced 20 entities to be granted standing, which will allow individuals or groups certain privileges in the public inquiry, such as the ability to suggest witnesses or conduct cross-examinations.

The entities awarded standing include the Government of Canada, the provinces of Alberta, Saskatchewan, and Manitoba, and the cities of Ottawa and Windsor in Ontario. Five groups and individuals associated with policing and law enforcement, a group of convoy organizers and participants, and a coalition of Ottawa business and community associations have also been granted standing.