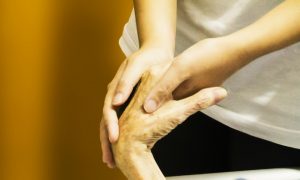 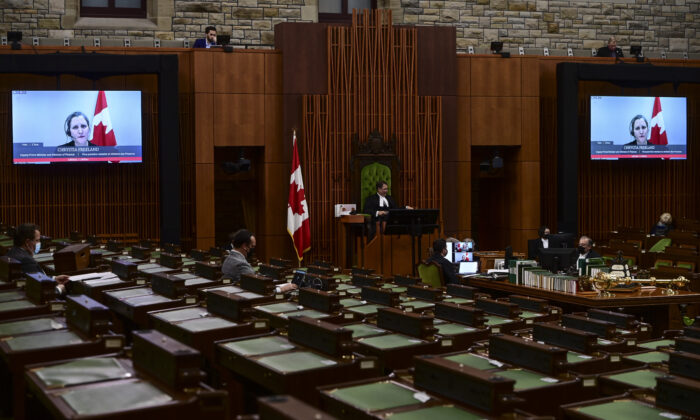 Minister of Finance Chrystia Freeland rises via video-link during question period in the House of Commons on Parliament Hill in Ottawa, Canada, on Jan. 26, 2021. (Sean Kilpatrick/The Canadian Press)
Canada

The federal government has agreed with the amendment of a bill in the Senate that would allow Canadians suffering solely from mental illnesses to receive medical assistance in dying.

The Liberal government has proposed to extend the interlude to two years.

Bill C-7 aims to expand access to assisted dying to people experiencing intolerable suffering and who are not close to their natural death, which would bend the law into compliance with a 2019 Quebec Superior Court ruling that argued the exclusion of those with mental illnesses to be unconstitutional.

Justice Minister David Lametti said he believes the exclusion is constitutional and he “does not believe we are entirely ready” to safely provide assisted dying to people with mental illnesses.

“We think 24 months is still an ambitious timeline to implement such an important change in Canada’s MAiD (medical assistance in dying) policy but it still provides a fixed timeline in the relatively near future,” Justice Minister David Lametti told the Commons.

Once approved by the Commons, the bill will return to the upper house, where senators will decide whether to accept the changes or dig in their heels.

The government is hoping to have the bill passed by both parliamentary chambers by Feb. 26 to meet the court-imposed deadline.

During the two-year interlude, the government has proposed to create an expert panel that will conduct an independent review and, within one year, recommend the “protocols, guidance, and safeguards” that should apply to requests for assisted dying from people with a mental illness.

Until the exclusion is lifted, senators had wanted to clarify that it does not apply to people with neurocognitive disorders like Alzheimer’s disease. However, the government rejected that amendment.

The government also rejected another Senate amendment to allow people who fear developing competence-eroding conditions such as dementia to make advance requests for an assisted death.

The government has also agreed to a modified version of another Senate amendment to require the collection of race-based data on who is requesting and receiving medical assistance in dying.

It is proposing to expand that to include data on people with disabilities and to specify that the information be used to determine if there is “the presence of any inequality—including systemic inequality—or disadvantage based on race, Indigenous identity, disability or other characteristics.”

That is in response to the strenuous opposition to Bill C-7 from disability rights advocates who maintain the bill sends the message that life with a disability is a fate worse than death. They argued that black and indigenous people with disabilities—who are already marginalized and facing systemic discrimination in the health system—could be induced to end their lives prematurely due to poverty and a lack of support services.

The Conservatives and the New Democrats are critical of the Liberal government’s responses to Bill C-7.

Conservative MP Michael Barrett moved an amendment to the government motion, that would delete the proposed sunset clause on the mental illness exclusion.

He said the government has ignored the concerns of disability rights advocates and that his party will not go along with the government’s rush to pass a “deeply flawed” bill.

NDP MP Charlie Angus criticized the “unelected and unaccountable Senate” for expanding assisted dying to “people who are depressed.”

Bloc Quebecois MP Luc Theriault said his party will support the minority Liberal government’s proposal. He said the Bloc would have liked to expand access to MAiD even further, but the bill has already made some important progress.

The government will ask the court on Thursday to give the thrice-extended deadline one more month—until March 26.