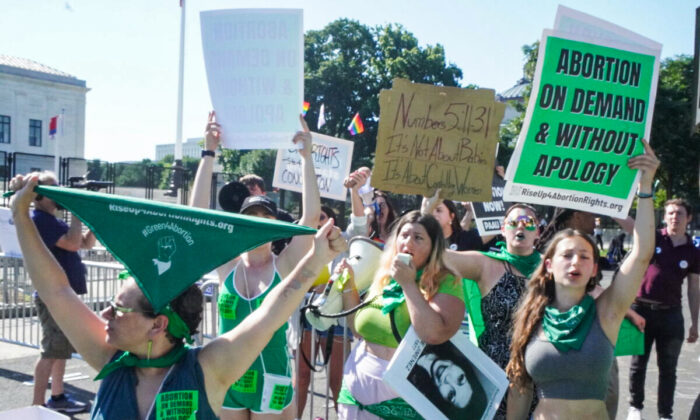 Many colleges and universities are providing mental health counseling for students who have a hard time coping with the reality that abortion is no longer considered a constitutional right.

“We know that today’s news may trigger difficult feelings,” John Carmichael, president of Evergreen State College in Washington, said in a campus-wide message on June 24. The message included a list of services on the college’s campus, including the police department, a suicide prevention hotline, mental health services, and urgent care clinics.

University of Wisconsin–Madison interim Chancellor John Karl Scholz sent a similar message encouraging students and faculty to “seek support and community in ways that feel right to you” amid “a period of uncertainty as the new legal status for abortion access in Wisconsin is interpreted and challenged.”

Wisconsin is one of the states where pre-Roe bans on abortion are still technically part of state law. It is being debated in the state Legislature whether the end of Roe means the return of an abortion ban dating back to the 1840s. Gov. Tony Evers, a Democrat who is facing reelection this year, has vowed to not enforce that pre-Civil War law.

In California, where the overturning of Roe is expected to have little impact on the availability of abortion, schools within the University of California (UC) system encouraged students to go to mental health counselors who can help process their stress and “validate” their feelings.

“We are deeply troubled by the long-term ramifications for reproductive rights following the U.S. Supreme Court’s opinion,” UC San Diego wrote in a Twitter post thread. “Students seeking immediate mental health and coping support may reach out to Counseling and Psychological Services.”

“For some, today marks a day that struck them with heavy news and a look into serious potential future struggles,” UC Irvine wrote on Twitter following the Roe overturn. The message was accompanied by an image listing actions students can take to make them feel better, including donating to abortion funds and abortion clinics.

“Allow yourself to express and process your emotions—Your feelings are valid,” another image reads. “Find and create safe spaces to process stressful subjects and emotions, whether that be with others or alone.”

On June 27, California’s Democrat-dominated state Legislature passed a bill that allows voters to decide in November’s general election whether the right to abortion and contraception should be added to the state constitution. Similar questions have also been put on statewide ballots in Kansas, Kentucky, Montana, and Vermont.

Meanwhile, conservative and moderate institutions are reacting differently. The Catholic University of America, located in Washington, celebrated the ruling for rejecting “the unholy idea that there is a constitutional right to kill unborn children” and for returning the question to voters and their elected representatives.

“Our national debates about abortion are not over,” Catholic University president John Garvey said in a statement. “They have just moved to a different forum. Now we will all have a say in deciding how best to care for mothers and children. That is a great privilege and a great challenge.”