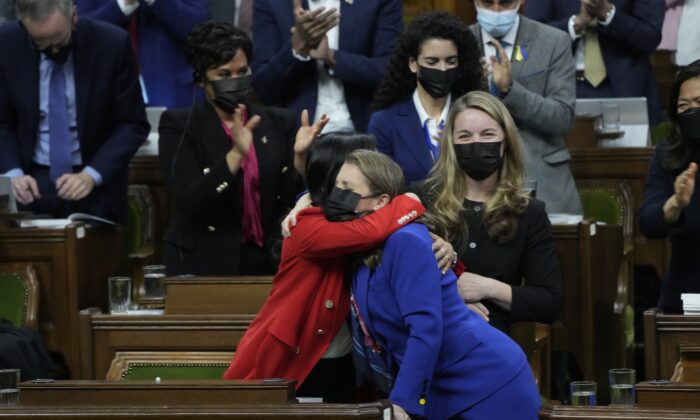 Finance Minister Chrystia Freeland receives a hug after tabling the federal budget in the House of Commons in Ottawa on April 7, 2022. (Adrian Wyld/The Canadian Press)
Canada

Liberal Budget Focuses on ‘Supply Side’ to Curb Inflation

The Liberal government presented its first budget in the new Parliament on Thursday. While staying in line with the Liberal platform, the budget has been nudged by Russia’s invasion of Ukraine, the inflation and housing affordability crisis, and the Liberals’ recent deal with the NDP.

Finance Minister Chrystia Freeland presented the budget and took credit for the economic recovery, and noted that the “time for extraordinary COVID support is over.”

“Think about that, after a devastating recession, after wave after wave, and lockdown after lockdown, our economy has not just recovered, it is booming,” she said.

While Freeland acknowledged that fighting COVID-19 and the recession came at a “high price,” she said inflation is a global phenomenon.

She added that “our chief economic problem is that there is too much demand chasing too little supply.”

This is a variation of the expression “too many dollars chasing too few goods” that’s been used repeatedly by the Conservative opposition to decry government-fuelled inflation generated by monetary policy and massive spending.

To address the issue, Freeland said the government’s strategy is to follow what U.S. Treasury Secretary Janet Yellen calls “modern supply-side economics,” which Freeland explained as “increasing supply is fundamental to growth, but takes a progressive people-centred approach.”

A core factor in the housing affordability crisis is the historic low supply of homes, and this has been compounded by the governments’ response to the pandemic, whether by injecting liquidity in the market or forcing people to work from home.

The budget is proposing $9.5 billion over five years on housing initiatives and it will also impose a ban on foreigners purchasing residential properties for the next two years.

Freeland said the government’s plan is to double the number of new homes built over the next 10 years. Much depends on municipalities with regard to zoning, and she said the effort will be a collective one between different levels of government and private and non-profit sectors.

Part of the housing initiative includes $4 billion dedicated to an “accelerator fund” to help municipalities modernize their zoning and permit systems and cut red tape. This was a Liberal promise during the last election, but CTV News said its implementation was the result of the deal struck with the NDP to keep the Liberals in power until 2025.

Another such initiative is a $1.5 billion investment to extend the rapid initiative to create 6,000 new affordable housing units.

While government revenues are being bolstered by inflation and oil prices, the government will raise taxes on corporations that made large profits during the pandemic, including Canada’s “big six” banks and large insurance firms.

This comes as no surprise, as it featured in the Liberal Party’s election platform, which stated that the operating income of the largest banks had increased over 17 percent during the pandemic.

The measure will only partly please the NDP, which hoped the tax would be applied also to large oil companies and big box stores. Its motion on that issue was voted down in the House on March 22.

The budget includes a one-time 15 percent charge on taxable income above $1 billion for the 2021 tax year, which will provide the government an expected $4.05 billion.

The Liberals also plan to increase the tax rate for big banks and insurance companies from 15 to 16.5 percent. This is expected to raise government revenues by $6.1 million over five years. This is lower than the 3 percent increase pledged in the Liberal platform.

Russia’s invasion of Ukraine put into focus Canada’s aging radar system in the Arctic to defend against potential Russian attacks, and it confronted the Liberals with a stark reality when it was unable to match vocal support to Ukraine with corresponding military equipment contributions.

After sending a modest amount of lethal aid, National Defence Minister Anita Anand said Canada had exhausted what it could provide.

The Liberal government is now increasing defence spending by $8.5 billion over five years.

The budget is committing $500 million for lethal and non-lethal military aid to Ukraine this year.

The rest of the allocation isn’t yet clear, but Freeland said there would be a “swift defence policy review to equip Canada for a world that has become more dangerous.”

This increase in defence spending is insufficient to reach the NATO guideline of 2 percent of GDP.

Ten NATO countries met or surpassed the 2 percent target in 2021, and Canada stood near the bottom, only besting Luxembourg, Spain, Belgium, and Slovenia.

But many consider the 2 percent guideline a political target that is only relevant if the expenditures fit within a well-thought-out defence strategy.

“It’s not really a question of increasing the defence budget per se. The question is how much, over what period of time, and particularly dedicated to what acquisitions,” said University of Manitoba defence expert James Fergusson while testifying before the House defence committee on March 21.

“The budget is bereft of any vision to meaningfully address what currently matters most to Canadians, which is the skyrocketing cost of living and housing affordability crisis,” Fast said.

“There’s no real plan to fight the inflation that is exacerbated [by] this government’s tax and spend profligacy, there’s no overarching investment into economic growth, no growth plan to improve our productivity and our ability to compete in the global marketplace. There’s no grand plan to restore Canada’s tarnished reputation as a good place to invest.”