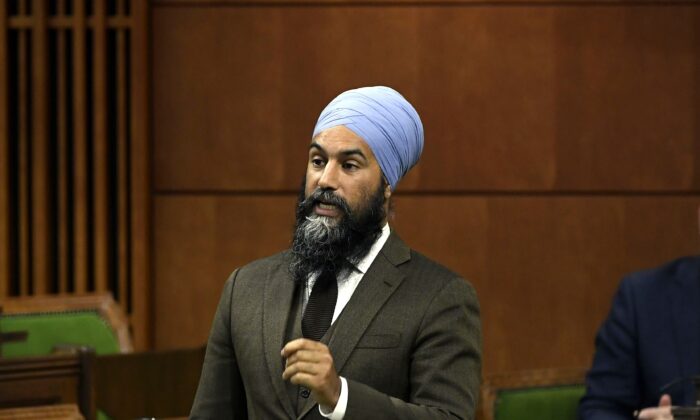 NDP Leader Jagmeet Singh rises during a meeting of the Special Committee on the COVID-19 Pandemic in the House of Commons on June 9, 2020. (The Canadian Press/Justin Tang)
Canada

The New Democratic Party has no money to fight an election, but it can take the Liberals’ keys to power. NDP Leader Jagmeet Singh wants more social spending and Prime Minister Justin Trudeau may not have the desire or the leverage to refuse. The Bloc has called for Trudeau to step down as prime minister and the Conservatives may be willing to bring down the government now that they have a permanent leader in Erin O’Toole.

Singh has condemned the Liberal plan to reduce the Canada Emergency Response Benefit (CERB) from $2,000 per month to the $1,600-a-month Canada Recovery Benefit (CRB) for those not eligible for the employment insurance program, a move that would affect almost 4.5 million Canadians.

“We think a 20 percent decrease in support to families is the wrong thing to do,” Singh told CBC on Aug. 22. “The $1,600 amount for families that are on the brink, who are just getting by, that drop in support will put them through some very serious pain.”

The less generous Liberal plan will still cost $37 billion. The four-week extension of CERB to Sept. 27 will cost $8 billion, three new programs will deliver $22 billion in benefits, and planned EI expansion will cost $7 billion. The three new programs include the CRB along with a Canada Recovery Sickness Benefit (CRSB) for workers who can’t work because they are sick or must self-isolate, and a Canada Recovery Caregiving Benefit (CRCB) for persons unable to work because they are caring for a family member.

The Liberals will also hand out even more EI. Normally, EI claimants would get benefits of 55 percent of their average weekly earnings up to $573 per week. Changes make recipients eligible for at least $400 per week if they have worked a minimum of 120 hours in the past 52 weeks. If recipients find a job, EI benefits are reduced by 50 cents for each dollar of earnings and will stop when their work income reaches 90 percent of the earnings used to calculate their EI.

The new spending will create an even deeper crater in 2020–21 federal budget deficit, currently projected to be $342.2 billion.

The NDP has its own debts to pay. The party had net negative assets of $4.5 million at the end of 2018, while it has not yet published its 2019 report. It also incurred a $10 million debt fighting the 2019 federal election, of which $1.5 million is still outstanding.

During the first six months of 2020, the NDP raised $2.3 million, barely twice as much as the Green Party but behind the Liberals’ $5.5 million and the Conservatives’ $7.3 million.

“We have fought elections on less … and done well,” NDP national director Anne McGrath told the CBC. “If the Liberals continue to help themselves or continue to be fighting themselves instead of helping people … then we will look at all options.”

The Liberals’ 156 seats in the House of Commons are 14 seats shy of the 170 needed to form a majority. The support of the 24 NDP MPs is crucial for the government’s survival. However, recent estimates by poll analyst Eric Grenier suggest that a snap election would give the Liberals a 51 percent chance of a winning majority and a 41 percent chance of winning the most seats but not a majority.

Joseph Garcea, faculty member in political studies at the University of Saskatchewan, says that when the Liberals face a confidence vote after Parliament resumes in late September, they will have the NDP’s support for two reasons.

“One, they run the risk of getting crushed—you know the orange crush that has happened in the past,” he said. Secondly, “they want to continue to build a legacy as a progressive party and they want to take some credit for whatever progressive initiatives are undertaken.”

Daniel Bernier of Earnscliffe Strategy Group agrees. He says the NDP “will push for the speech from the throne to include social measures like dental care, child care, and home care for older citizens. We will see about a minimum salary as Germany is experimenting [with], and Spain [is] considering.”

Singh has already called on the government to immediately spend $2 billion on child care in order to allow women to return to work during the pandemic, plus another $10 billion over the next four years for universal child care.

“The federal government must acknowledge that if we want a recovery, we need to make sure women can get back to work and that means assuring that there’s affordable and accessible child care,” he told a news conference on Aug. 14 in Victoria.

The policy path seems the same whether the Liberals want to perpetuate their minority or govern to earn a renewed majority, says Jaqueline Biollo, a principal with Aurora Strategy Group.

“The Liberals would need to lean on the relationships they’ve built with the NDP and the Greens and focus on a platform that heightens essential programs for Canadians, including climate change action, national pharmacare, interest-free student loans, cuts to cellphone bills, investments in affordable housing, and new taxes on the ultra rich.”