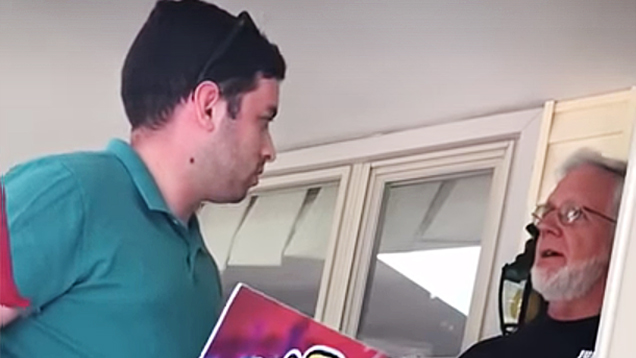 Tom Reed is running for re-election to Congress in New York’s 23rd District, where he has served since winning a special election in 2010. He faces Democrat Tracy Mitrano, former IT director for Cornell University.

Reed, a Republican, got annoyed that his campaign signs seemed to be disappearing at an unusual rate. The signs’ lifespan seemed unusually short—and their disappearance didn’t coordinate with strong winds or any other natural occurrence.

Reasonably, Reed assumed someone was removing his signs.

Reed resorted to an interesting tactic: he implanted a GPS receiver in one of his signs. And that GPS tracker showed up at the home address of a very vocal liberal activist who strongly opposed Reed‘s candidacy.

Gary McCaslan leads the left-leaning Citizens for a Better Southern Tier political activist group. He has been prominent in organizing protests against Reed and his policies.

Weinstein, and a friend shooting video, called on their political adversary.

McCaslin was busted and he knew it. However, he didn’t exactly admit it right away.

Weinstein rang McCaslin’s bell, and the activist answered his door. Confronted with incontrovertible evidence, McCaslin admitted to removing many signs, according to the Finger Lakes Daily News.

However, McCaslin could only produce a single sign—and not the one with the transponder.

McCaslan told Weinstein that he didn’t know anything about a transponder. Weinstein replied, “It’s pinging at your house.”

McCaslan then admitted, “Yeah, Yeah, it’s pinging at my house.”

The activist went on to say he had picked up the sign only to be helpful. He picked it up three days after the primary election, when signs were supposed to be picked up—though McCaslan admitted he didn’t take any of the Democratic candidates’ signs.

McCaslan’s wife then came to the door and said that McCaslan had picked up the sign to be helpful.

“Honestly, Nick, it was a gesture of goodwill—but you’re going to see it as something horrible because that’s what you do,” McCaslan’s wife exclaimed. “Gary didn’t steal that.”

McCaslan then told Weinstein, “You found the sign, I’m keeping the tracker. “ When Weinstein responded, “No,” McCaslan shot back, “You call the police then. I’ll be right here.”

Some people might think it a bit less than strategic to invite a political opponent to call the police after confessing to stealing that person’s property.

Nick Weinstein thought it was good advice. He did call the police.

When the police arrived, they charged McCaslan with petty larceny. If convicted, he faces a year in jail and a $1,000 fine.

McCaslin’s lawyer said he tried to return the tracker but the Reed campaign refused to take it back.

There is that video, though.

According to Newser.com, Reed’s opponent, Tracy Mitrano, had admitted earlier that two people who had volunteered to help her campaign had stolen some signs and were let go.