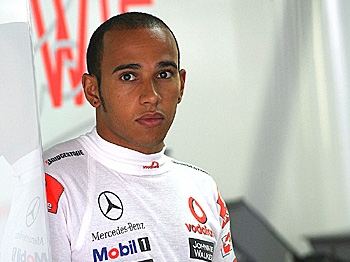 McLaren Mercedes driver Lewis Hamilton was fined $500 for his burnouts and fishtails the night before the Australian Grand Prix. (Patrik Stollarz/AFP/Getty Images)
Motorsports

Chris Jasurek
Writer
View profile
Follow
biggersmaller
Print
McLaren Formula 1 driver Lewis Hamilton was fined $Au500 Tuesday for dangerous and disruptive driving while he was in Melbourne for the Australian Grand Prix on March 26 of this year.

The British-born racer, driving a borrowed Mercedes-Benz C6 AMG, did a series fishtails and burnouts to impress fans outside the Albert Park Grand Prix track the night before the race.

Police impounded the car and charged the 25-year-old F1 driver with “intentionally losing control of a motor vehicle.”

Magistrate Clive Alsop said Hamilton should act as a role model to young people, instead of engaging in adolescent stunts.

"This is about somebody in a responsible position behaving like a hoon," Alsop said, according to Independent.co.uk.

“Hoon” is an Australian term for a person exhibiting loutish or anti-social behavior, specifically in an automobile.

Hamilton pled guilty to improper use of a motor vehicle. He avoided conviction as it was his first offense.

The 2008 World Champion will have no trouble paying the fine as his annual salary is reported to be in excess of US$ 20 million.

The court excused Hamilton from appearing in person at his sentencing, as the driver was in Belgium preparing for the Belgian Grand Prix.

Mr. Mukerjea went on to note that Hamilton had publicly apologized over the incident and suffered “embarrassment, humiliation and distress” after he was denounced in the media, according to a report in The Australian.