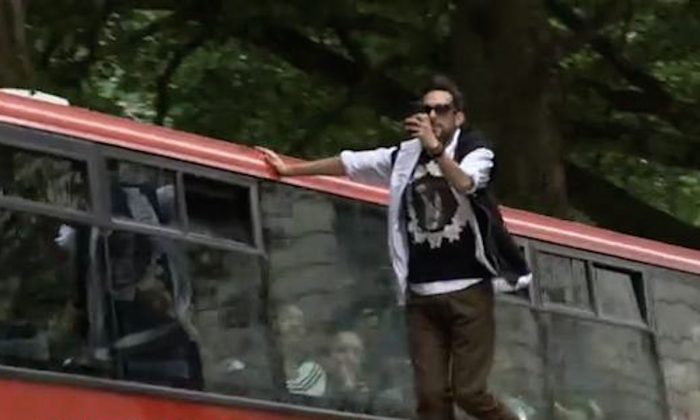 The Pepsi-Max-sponsored stunt drew the scrutiny of so many social media users eager to spot the trick.

Australia’s News.com gathered comments from citizen sleuths on its Facebook page and deduced the arm resting on the bus roof must have been fake, attached to a harness holding Dynamo up.

A demonstration of how to pull off this illusion was posted on YouTube by Art Zone Productions in September 2012. In that demonstration, however, the magician is shown to wear a sleeve and a cape that conceals the machinery. Dynamo’s shirt sleeves were rolled up.

Nonetheless, the Facebook users noted that his fingers didn’t move and the arm looks fake.

Some were disappointed, some were impressed with the skill of the illusion.

Minjun Lee wrote: “He managed it to fake people. There is nothing wrong with it. Dynamo calls himself as an illusionist. This is just his work.”

In speculation as to how Dynamo managed to levitate, Brady Somers wrote, “He had a Red Bull.” Chritine Rule wrote, “Photoshop.” Andrew Gao wrote, “He used the force.”