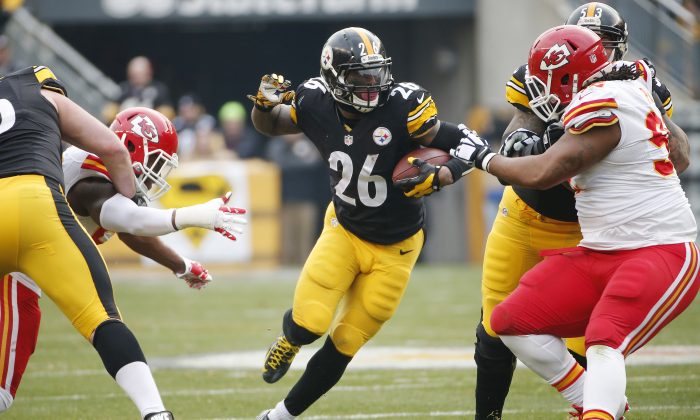 Le’Veon Bell, the Pittsburgh Steelers running back, was injured against the Cincinnati Bengals on Sunday Night Football.

Bell received a pass in the third quarter before he was hit low. An NBC report said he hyper extended his knee.

He appeared to grab his leg in pain. He won’t return to the game.

PITTSBURGH (AP) — Antonio Brown returned a punt 71 yards for a touchdown and Ben Roethlisberger hit Martavis Bryant for a 21-yard score to give the Pittsburgh Steelers a 20-10 halftime lead over the mistake-prone Cincinnati Bengals on Sunday night.

The Steelers moved within 30 minutes of their first AFC North title since 2010 by relying on big plays from the NFL’s second-ranked offense and some questionable throws by Cincinnati quarterback Andy Dalton, who tossed a pair of first-half interceptions to Brice McCain.

The winner will be the No. 3 seed in the AFC and host Baltimore next weekend, while the loser will play at Indianapolis.

Brown kickstarted the Steelers early in the first quarter, fielding a punt from Kevin Huber at the Pittsburgh 29 and raced to his right only to reverse back to his left, pushing teammate Shamarko Thomas into Huber’s way to clear a path to the end zone.

Cincinnati evened it later in the first. Dalton overcame a poorly overthrown interception on Cincinnati’s second possession by converting a fourth-and-3 with a 14-yard pass to Brandon Tate then following it up with a nifty flip to Bernard after escaping the pass rush. Bernard leapt over two Steelers before reaching over the goal line.

Roethlisberger skipped his usual pregame warmup, not coming on to the field until the defense was being introduced just minutes before the kickoff while dealing with flu-like symptoms. He passed for 191 yards in the first half, though a botched snap allowed the Bengals to take a 10-7 lead.

Roethlisberger bounced back quickly. A 26-yard throw to Le’Veon Bell set up Shaun Suisham’s field goal that tied it at 10 midway through the second quarter. Dalton then overthrew A.J. Green, who tipped the ball into the hands of McCain. A lengthy return set the Steelers up at the Cincinnati 28. Two plays later Bryant took a wide receiver-screen and darted to the end zone for his eighth touchdown of the season.

The Steelers tacked on a field goal in the final minute of the half.

The Steelers played without safety Troy Polamalu, who missed his second straight game with a knee injury. Cornerback Ike Taylor was also made inactive, forcing Pittsburgh to send out a patchwork secondary to try and slow down Green, who had a career-high 224 yards in the team’s first meeting on Dec. 7.