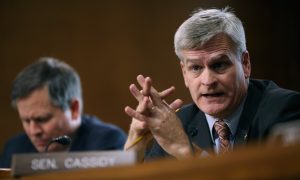 A level II endangered/missing child media advisory has been issued for 9-year-old Bryson Thibodeaux at 6:15 p.m. on Dec. 29 after a hundreds of volunteers and law enforcement officers scoured Evangeline Parish in Louisiana for a full day in search of him.

The alert was issued by the Louisiana State Police on behalf of the Evangeline Parish Sheriff’s Office more than 24 hours after the child went missing.

Bryson left his home on the 3400 block of Chataignier Road around noon on Dec. 28, wearing a long sleeve shirt, boxers, but no shoes.

He was reported missing by his father who believes his son slipped out while he was bringing their dogs inside their home, reported KATC. “He says he wasn’t aware because the alarm was already going off from him opening another door to the house for the dogs,” the outlet reported.

Family members have confirmed that Bryson has Autism and as a result, may have impaired judgement.

“Speculation on the reasons of his disappearance will not aid in finding him. If you wish to help, volunteers are still very appreciated. If you cannot help in the search, then please continue to share to reach as many people as possible,” the police said.

Volunteers were asked to report to organizers at the Blue Junction Store on Chataignier Road.

“If you live anywhere near these areas, we ask that you check around your properties, check in vehicles and outbuildings. It’s very cold and he may be trying to find warmth,” the police added.

Officials have said that the search will continue well into the night.

The Evangeline Parish 911 Facebook page was helping organize the search, stating around noon on Dec. 29: “We would appreciate any and all help and volunteers to search. Four wheelers, horses, drones: anything that could find this child.”

“Please pray for his safe return and please check all your vehicles, sheds etc. We think he may have desperately seeked [sic] shelter from the rigid temps,” the page added.