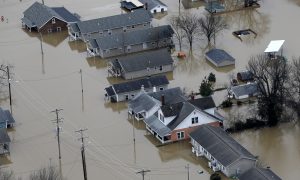 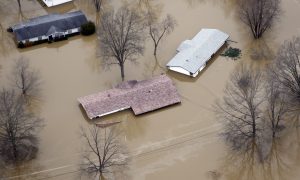 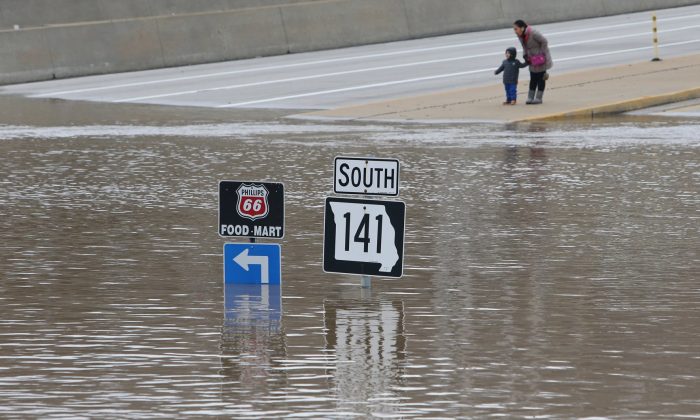 ST. LOUIS—The Mississippi River floods more often than it used to, and at higher levels. Richard Knaup thinks he knows why.

“Prior to levee building, the river was a wild thing and it spread out between the river bluffs,” Knaup said Monday, Jan. 4. “Now we’ve tried to tame it. Mother Nature and Old Man River will fight back.”

The rains that caused this winter’s flood, blamed already for 25 deaths and damage to hundreds of homes and businesses, ended a week ago, but the water was still rising Monday in southern Missouri and Illinois. The Illinois River, which joins the Mississippi above St. Louis, was expected to reach near-record crests this week between the Illinois towns of Havana and Valley City, creating “a very dangerous situation” as levees there become saturated, said Steve Buan, a National Weather Service hydrologist.

Several other states along the Mississippi River were still bracing for the crest, which was flowing past Tiptonville, Tennessee, and expected to reach Memphis on Thursday at 6.5 feet above flood stage.

For many in the flood-weary Midwest, fighting the river has become an almost annual event. In Cape Girardeau County, all but 5 of the 32 highest crests on record have occurred since the record-setting 1993 flood, and 4 of the top 10 have happened since 2011.

So what’s going on? Unusual weather patterns are a symptom of global warming, but experts also blame more immediate developments, including efforts to protect growing towns and cities from the rivers both that sustain and threaten them.

Bob Holmes, a Missouri-based hydrologic engineer for the U.S. Geological Survey, says the Midwest has received far more rainfall than normal over the past quarter of a century, and more extreme rainstorms, such as the three-day downpour Dec. 26–28 that dumped 10 inches of rain over much of Missouri and Illinois and caused this latest mess. But urban sprawl also increases flood risk, he said.

“Farm fields will soak up water,” Holmes said. “If you pave it with concrete or asphalt, all of a sudden that is a very efficient conduit right into the streams and you get increased flooding.”

Bob Criss, an earth and planetary science professor at Washington University in St. Louis, also blames urbanization, and says this latest spike of rain wouldn’t have caused major flooding if the river wasn’t constricted by levees and floodwalls.

Earthen mounds have held back the Mississippi in places since French settlers installed the river’s first levees in Louisiana in 1717. They spread quickly as riverfront communities developed, but floods have continued to pose threats ever since.

This was predicted as far back as 1852, when engineer Charles Ellet Jr. warned in a report to Congress that risks would only increase as “water that was formerly allowed to spread over many thousand square miles of low lands is becoming more and more confined to the immediate channel of the river.”

By 1926, the Mississippi River Commission declared its levee system to be complete and able to “prevent the destructive effects of floods.” The claim collapsed less than a year later, when the “Great Mississippi Flood of 1927” devastated much of the Midwest.

That calamity led to still-higher barriers as the Flood Control Act of 1928 urged the Army Corps of Engineers to develop a system of more levees, spillways, and other controls.

Flood control took on renewed urgency after flooding in 1993, which the Corps describes as “a hydro-meteorological event without precedent in modern times on the upper Mississippi.” Damage totaled $15 billion as hundreds of levees failed; 50 people died and thousands were evacuated, some for months.

The federal government bought out hundreds of homes and businesses, turning floodplains into greenspace throughout the Midwest. But locations deemed too valuable for buyouts are now protected by even-bigger and stronger levees. The Mississippi River now has an estimated 3,500 miles of levees, ranging from small barriers around farmland to Corps-built structures protecting towns and major cities.

Army Corps of Engineers spokesman Rene Poche defends the federal system, saying it prevented an estimated $230 billion in damage in 2011, when the river south of St. Louis experienced its worst flooding since 1993.

In Cape Girardeau County, Knaup knows that the same system he blames for increased flooding also protects homes and businesses.

“I appreciate every levee and floodwall we have,” Knaup said. “I’m grateful for them.”