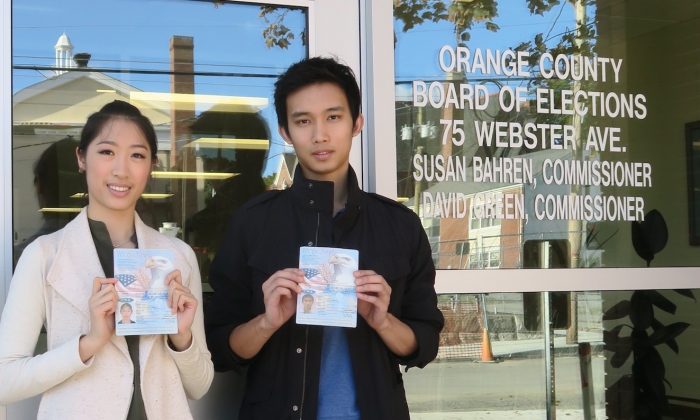 Ashley Wei and Andrew Fung stand outside the Board of Elections holding the U.S. passports they used to demonstrate their citizenship. The challenge to the right to vote of 30 residents of Dragon Springs was one way in which the community became an object of discussion in the Deerpark political campaign. (Sue Jones)
The Reader's Turn

Editor’s note: Collected here are several of the many letters Epoch Times has received from residents concerned over how the Falun Gong community of Dragon Springs has become a subject of debate in the Deerpark political campaign.

Two years ago, I came to Deerpark for my first job: teaching English at Fei Tian Academy of the Arts, which is located at Dragon Springs. Before long, I got married and found a home. Everyone I’ve met here is wonderful; I like my new neighbors and feel safer knowing they’re here.

But, aspects of the current election have made my family feel somewhat unsafe. This morning, on our way to work, my wife and I saw a lawn sign that said “Keep Dragon Springs Out of Deerpark.” What kind of neighbor talks like that? Is that good? Can the people spreading bigotry and rumors please get to know my family before making us a campaign issue?

Wonderful people want to move here, renovate houses, open businesses, and join this community because their spiritual community is here.

That’s how Huguenot got its name! The Huguenots were protestant Christians persecuted in France and Belgium who came to America for religious freedom. Now Falun Gong practitioners have come to Deerpark for the same reason!

Can we have a barbecue together instead of acting like this? That’s much more enjoyable than gossiping or telling neighbors to leave town.

The temple where I meditate, read, and teach is wonderful, as is the YMCA camp, Christian camp, churches, and parks; in fact, these are the best things! I wish this election could be about the actual issues facing Deerpark—rising taxes, reduced services, building community, keeping kids active and safe.

As a proud citizen of this country, I was thrilled when my Taiwanese wife became an American citizen two years ago, and have been looking forward to introducing her this year to the process of voting: this most basic foundation of our democracy.

I am deeply disappointed that this is the political climate my wife will face in her first American voting experience.

I was shocked, then, when I read that Deerpark Supervisor Gary Spears wanted in August to investigate the voting registrations of 30 U.S. citizens who reside at the Dragon Springs Buddhist Temple in Cuddebackville, partially because they are “Chinese people.”

We don’t live at Dragon Springs, but how do I know that my wife won’t be the next to be targeted because of her Asian first name? More recently, I have received repeated mailings from Spears linking the Democratic candidates in the Deerpark race to Dragon Springs, as if this election were a referendum on Asian-American voters.

I am deeply disappointed that this is the political climate my wife will face in her first American voting experience. Politicians should never divide communities into “us” and “them” in order to win votes. America is a country of immigrants, whose contributions to democracy have kept this nation strong.

Dragon Springs has done a great service in protecting Falun Gong refugees who face torture in China for their beliefs. Let’s incorporate Dragon Springs into our community as we debate the issues facing Deerpark instead of trying to turn the temple, as well as Asian-Americans like my wife, into the enemy. We can vote for any party.

There are many taxpaying Americans at Dragon Springs and I am one of them.

There are many taxpaying Americans at Dragon Springs and I am one of them. I was born and raised on a farm in Iowa. In 2010, I moved to Deerpark with my wife. We lived in and enjoyed Otisville, but I noticed that real estate values in Deerpark were lower than in nearby communities and it was quite a beautiful place.

In 2015, we bought a home in Deerpark that had been on the market for several years and had several asking price reductions. Of course we pay the same town and school taxes that anyone would moving into the community. It is an older home, so I have since purchased new gutters, a new furnace, use a lawn service etc. all using local businesses and people. My wife and I enjoy the local restaurants and buy gas at O’Dell’s since I refuse to go to New Jersey. I also own and pay taxes on a piece of undeveloped land in the area. I believe the presence of Dragon Springs has attracted more than a few new taxpayers and consumers to the area and that is a good thing.

If Only My Grandma Were Here

I want to share with you a little personal story. A couple weeks ago I was getting ready to perform at Carnegie Hall when I suddenly thought of my grandmother. I remember I was six years old, still back in China, and my grandmother was watching me practice violin in our small kitchen. “You’re just playing for a few of us now,” she said, “but one day you will perform for so many people.”

My grandmother used to have many ailments—she had high blood pressure and her hips were covered with sores. But through practicing Falun Gong meditation, her health improved dramatically. Naturally, we all saw the changes in her and soon my entire family started practicing Falun Gong. This was happening in families throughout China, and so Falun Gong became very popular.

This town and this place have given me my freedom back.

Afterwards, my father and I were always on the move. I was constantly terrified that I would be arrested. Fortunately, I came to America and since then, life has been much better. But even after coming to a free society, for the first six months I still felt like I was living in the nightmare of persecution. Every time I saw a police car, my heart would jump. Even when I meditated by myself in my own room, I would close all the curtains. It took me half a year in the United States before I started leaving the curtains open.

Today, I call Deerpark and Dragon Springs my home. This town and this place have given me my freedom back, have given me a new family, and new hope. I am so glad to have this safe place to live, and am so grateful to the people here who welcomed me with open arms. And I feel fortunate that I can now give back through music and share beautiful things with so many people—just like my grandmother once said.

Keep Dragon Springs Out of the Race

As a resident of Deerpark, I’ve been receiving all kinds of things in the mail related to the local election and I’m getting a little tired of how one side is always attempting to link Dragon Springs to the local Democratic campaign—Dragons Springs is neither Democrat nor Republican. I’d like to say: Keep Dragon Springs out of this race. It’s a peaceful place and we should keep it that way.

Dragon Springs is not affiliated with any political party.

I teach freshman English at Fei Tian College, which is located on the site of Dragon Springs, so I’m there almost every day. I can say Dragon Springs is not affiliated with any political party, nor does it endorse any particular candidate. Anyone who has visited the site knows how lucky Orange County is to be the home to something so elegant and serene.

The biggest complaint some people in the neighborhood have about Dragon Springs is it doesn’t pay property taxes. But that’s because U.S. law says religious or educational organizations are non-profit and thus don’t need to pay taxes because they contribute to society in other ways. Dragon Springs is an organization that is very much focused on human rights, the arts, and education, and it adds to the cultural diversity of our area.

As an employee of Fei Tian College, I certainly pay property tax, school tax, income tax, sales tax etc. I feel happy to be able to give something back to my community and have hired a number of local contractors and landscapers over the years to help me set up and maintain my new home. I’m also glad to have gotten to know a number of very nice neighbors.