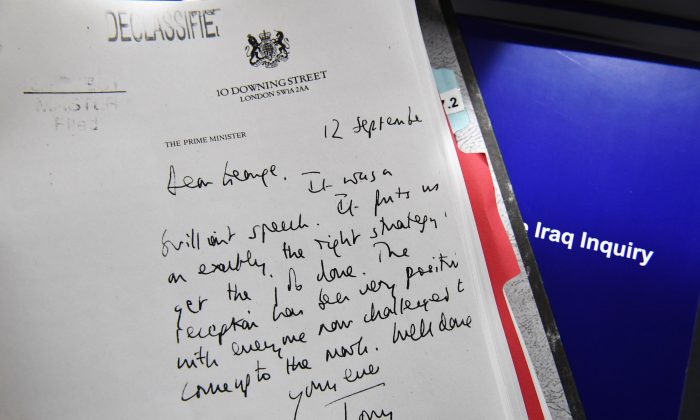 A detail of a declassified handwritten letter sent by the then British Prime Minister Tony Blair, to former U.S President George W. Bush, is seen as part of the Iraq Inquiry Report presented by Sir John Chilcot at the Queen Elizabeth II Centre in London, Wednesday, July 6, 2016. The head of Britain's Iraq War inquiry has released a damning verdict on a conflict he says was mounted on flawed intelligence, executed with "wholly inadequate" planning. (Jeff J Mitchell/Pool via AP)
International

The report by retired civil servant John Chilcot offered a sweeping condemnation of Britain’s preparations for the war and its aftermath. The newly published documents offer one side of the vital relationship between Bush and Blair — Blair’s letters to Bush are published, but Bush’s responses are not.

In a six-page “Secret Personal” memo to Bush written July 28, 2002, Blair says he would do “whatever” with regards to removing Iraqi dictator Saddam Hussain from power. Blair says toppling Saddam is “the right thing to do” adding that the vital question is “not when, but how.”

At the time, Blair was telling the British public and Parliament that no decision to go to war against Iraq had been made.

“I will be with you whatever,” Blair wrote his U.S. counterpart. “But this is the moment to assess bluntly the difficulties. The planning on this and the strategy are the toughest yet. This is not Kosovo. This is not Afghanistan. It is not even the Gulf War.”

Blair was criticized during his Labour Party administration for aligning himself too closely with his American allies. He provided Bush with vital political support in the months before the 2003 invasion and his decision to commit British forces provided vital military backing to the U.S.-led effort.

In his letters, many of which are undated, Blair was frequently blunt about the lack of public and political support in Britain and elsewhere for an invasion of Iraq.

“Opinion in the U.S. is quite simply on a different planet from opinion here in Europe or in the Arab world,” he said in the July 28, 2002, missive. “In Britain right now I couldn’t be sure of support from Parliament, party, public or even some of the Cabinet. And this is Britain. In Europe generally, people just don’t have the same sense of urgency post 9/11 as people in the U.S.”

Blair tries to convince a reluctant Bush that the best way to build support would be to take the issue to the U.N. Security Council. He suggests that by going to the U.N., they could give Saddam a deadline to let U.N. weapons inspectors in without any conditions.

“He would probably screw it up and not meet the deadline, and if he came forward after the deadline, we would just refuse to deal,” Blair wrote.

Blair, however, seemed confident he could eventually win public backing by emphasizing the threat posed by Saddam.

“If we recapitulate all the WMD (weapons of mass destruction) evidence; add his attempts to secure nuclear capability; and, as seems possible, add on al-Qaida link, it will be hugely persuasive over here,” he wrote.

No weapons of mass destruction were found inside Iraq.

Blair also offers Bush advice on communications strategy, suggesting that a “media and communications War Room” be set up in both countries. He suggests a unified messaging strategy, a policy discouraging interviews, and “continually” focusing on Saddam’s nature.

The message should be this, Blair says: “He’s bad; we’re good; he’s going to lose’ we’re going to win.” In later undated notes and letters released in the report, as the reconstruction of Iraq proves far more difficult than had been anticipated, Blair warns Bush that Islamic extremists have a coherent political strategy that is well linked to their military objectives, allowing them to capitalize on anti-Western sentiments throughout the Islamic world.

He warns in a declassified note that “the bad news is still the massive level of misunderstanding about us, our motives, and the fact that we want the same as them: a free Iraq.”

By the time British combat forces finally left Iraq in 2009, the conflict had killed 179 British troops, almost 4,500 American personnel and more than 100,000 Iraqis.