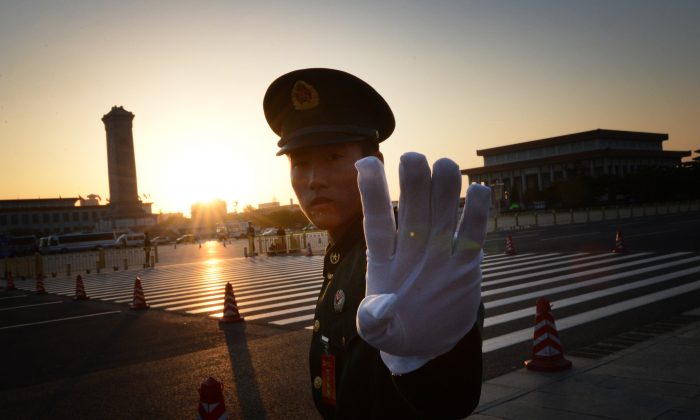 A Chinese paramilitary policeman reacts outside the opening session of the Chinese Communist Party's five-yearly Congress at the Great Hall of the People in Beijing on Nov. 8, 2012. (MARK RALSTON/AFP/Getty Images)
Thinking About China

Letter to an American in China: Where is the Berlin Wall Today?

An American in China wrote to me concerned about the Chinese people’s apparent acceptance of censorship. This is my response.

In your email, you commented that it was your impression that most Chinese people you encountered in everyday life were indifferent to the media censorship imposed by the Chinese Communist Party (CCP).

I don’t disagree with your observation. I think there are a couple of reasons why this is the case.

The CCP runs the most sophisticated internet filtering system in the world, the so-called Great Firewall (GFW), and circumvention of the firewall can carry a stiff penalty.

In September, a Chinese man received a nine-month jail sentence because he sold VPN (virtual private network) software, which allows people to visit websites banned by the CCP. Sometimes, the mere mention of circumventing censorship makes people uncomfortable. It is easier to avoid confronting the fact of censorship.

People in China, then, are like the residents of Mega City in “The Matrix” movie trilogy. On the surface, everything seems normal, and people seem to enjoy their lives. In China, most have no idea the whole internet system is rigged.

While many websites that are popular in the West, such as Google, Facebook, and Twitter, are blocked in China, the existence of Chinese knockoffs has, to a certain extent, reduced the demand for these services in China. The Chinese alternatives are not as good, but will do the job.

Moreover, if one doesn’t even know about an incident or event in history, one naturally wouldn’t be curious about it or search for it. The CCP’s suppression of truth is so relentless that for China’s younger generations, certain historical events never happened. One such event is the Tiananmen Square massacre.

In the first “Matrix” film, the protagonist was offered a blue pill and a red pill. If he chooses the blue pill, he can go on living his life as usual in Mega City, as if nothing ever happened. If he chooses the red pill, he will gain freedom, but become a rogue constantly hunted by the enforcers of the Matrix.

A small portion of Chinese netizens faces a similar dilemma. Inside the GFW, they know they live in a falsified reality. Circumventing the GFW, they will obtain knowledge and information, but run the risk of colliding with the CCP.

However, there are signs that more Chinese are now willing to choose the red pill.

In 2013, an informal poll of 120 journalism students in eight universities, conducted by an American professor who taught at Tsinghua University, indicated that three-quarters of respondents wanted less media censorship. More than 76 percent of the students said they trust Western media more than domestic media. Only 9 percent believed more was true in Chinese state media than in foreign media.

The Great Firewall may even look insurmountable for now, as the Berlin Wall once did.

A recent Stanford University study systematically examined the impact of an unfiltered internet on the willingness of Chinese students to acquire politically sensitive information. The experiment was much larger in scale and more rigorous in design and execution than the informal poll.

In the study, Chinese college students were provided free access to an uncensored internet for 18 months. One interesting result was that access alone was not sufficient to increase the consumption of free information. However, a little nudge, in the form of occasional online surveys in exchange for small prizes, led to a long-lasting and elevated demand for uncensored information, according to the study.

The brief exposure to the unfiltered internet changed the economic beliefs, political attitudes, and behaviors of the students. They became more skeptical about the CCP’s governance, more pessimistic about the Chinese economy, but more optimistic about the U.S. economy.

They were more likely to initiate conversations on political topics with other students and pass on the information they acquired. After participating in the experiment, roughly one-third of the students expressed the desire to pursue graduate studies overseas, hence leaving China in the near future, in contrast to one-fifth in the control group.

You might say the students were “red-pilled.” For some of them, living in a falsified reality is becoming unbearable. It is amazing that access to the free Internet in an 18-month period could undo CCP brainwashing the students had experienced their entire lives. This is what the CCP fears the most. This is why it has been desperately trying to isolate China from the free world in the first place.

You probably have noticed that most Chinese people typically avoid discussing topics like media censorship and the GFW. I hope you don’t take this as a sign that Chinese are not longing for freedom, or that they are not interested in uncensored information. They are. Right now, there are tens of thousands of Chinese netizens who defy the CCP and seek the truth on the unfiltered internet.

The GFW may look formidable. It may even look insurmountable for now, as the Berlin Wall once did. But where is the Berlin Wall today? One is lucky to find pieces of it in museums. The GFW will not stop Chinese from getting free information, either. I’m hopeful and optimistic.