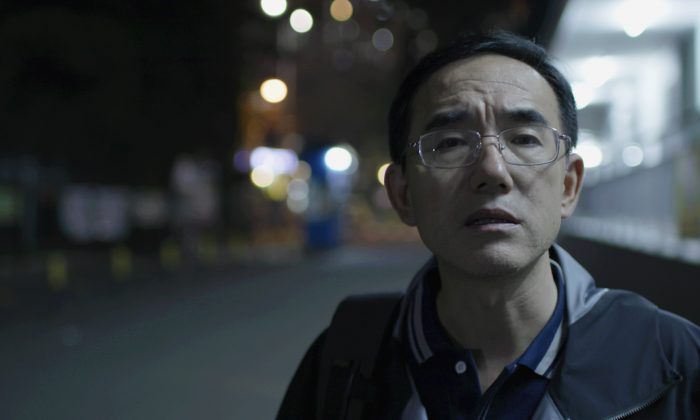 The focal point of the film is a letter that traveled over 5,000 miles from a Chinese labor camp into the hands of an Oregon mother of two, Julie Keith.

Keith was opening a package of Halloween decorations she’d purchased from Kmart, when she discovered a handwritten SOS note from a man imprisoned in the notorious Masanjia labor camp. The letter-writer said he had been imprisoned for practicing the spiritual discipline Falun Dafa, also known as Falun Gong.

The ancient discipline had grown popular in China the 1990s due to its health benefits and uplifting spiritual philosophy. By 1999, 70 million to 100 million people in China were practicing—too many for the authoritarian regime, which launched a country-wide persecution campaign to eradicate it. Every person who did the meditation exercises suddenly became a criminal overnight.

Upon receiving the letter, Keith took the story to her local Oregon newspaper. Soon, headlines across the globe were spotlighting China’s labor camp system.

When Canada-based film director Leon Lee heard about Keith’s story, he reached out to his underground sources in China to help him find the letter-writer.

After a three-year search, Lee found Sun Yi, who had actually seen Lee’s previous films and was eager to tell his story through the medium of a documentary.

However, Lee wasn’t able to go to China himself since his human rights-related films had drawn the ire of the Chinese communist authorities.

So Lee told Yi what equipment to buy and gave him a crash course in filmmaking over Skype, so that Yi could secretly capture footage inside China, under the noses of Chinese authorities.

After the NYU screening, Lee joined the event via video chat for a Q&A alongside Chris Chappell, NYU alumni and host of the popular YouTube channel, “China Uncensored.”

“We stand in solidarity with you,” Albert Nicolas told event organizers afterward. An administrator at NYU, Nicolas brought his wife and two daughters to the screening. “[The Chinese authorities] are packaging themselves to the West so that people think that they are better than what they really are.”

Nicolas expressed his hopes that one day Chinese leaders would be brought to justice for their crimes. His wife, Thelma, said she felt grateful the film was being shown. “I wish more people could see it. Thank you so much for putting it all together,” she said.

“I really did not know how brutal the regime really is. So I learned a lot about that, and how this brutality is forcing people to live in fear,” said Rose Curran, a student majoring in global affairs at the School of Professional Studies.

Although the “re-education through labor” system was formally abolished in China in 2013—as a direct result of the immense attention Yi’s letter received—other versions of extrajudicial detention have replaced the camps. Many Falun Dafa practitioners as well as activists, petitioners, and human rights lawyers are still being arbitrarily imprisoned in China.

At the end of the event, Lee asked audience members to help spread awareness about what they’d seen now that they too had received this letter.