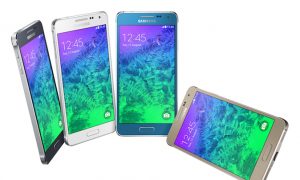 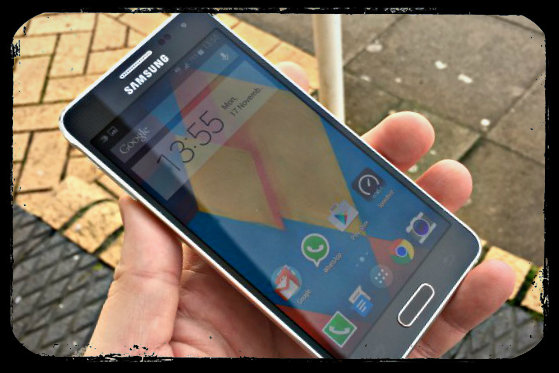 The Alpha has some of the latest processing technology. The octa core CPU combines a 1.8Ghz quad-core unit with a ever-so-slightly-slower 1.3Ghz quad core CPU
By Dan
biggersmaller
Print

For so long Samsung fans have hoped to see a new phone with metal design instead of the traditional plastic material used on so many high value devices.

And as if by magic we now have two – the Galaxy Alpha and the much larger Galaxy Note 4 that recently went on sale here in the UK.

With Samsung making so many phones and now tweaking their TouchWiz UI to be more “flat” (and less “in your face”), you would hope that all that thought and technology paired with a metal frame would make an outstanding device?

First up, a big thank you to Three for sending the Galaxy Alpha for review.

The Alpha has some of the latest processing technology. The octa core CPU combines a 1.8Ghz quad-core unit with a ever-so-slightly-slower (but more power efficient) 1.3Ghz quad core CPU. That’s EIGHT cores in a single phone.

You get 2GB of RAM which is expected for a mid-high end device costing around £500 these days and this allows smooth multitasking with no delay in running a few heavy apps such as games which need more power.

Ignoring the numbers for a moment and looking at actual use, my concerns with the battery came true rather quickly. The phone struggled to make it through a day even with the normal use of a few calls, texts, emails and twitter use.

What you also get is GPS, Bluetooth and WiFi as standard. There’s access to the DC-HSDPA network which supports up to 42Mbps speeds.

Not only that, but you also get 4G networking which boasts CAT6 technology. This supports up to 300Mbps where possible, however for this to work you need to pair 2 bands of LTE together, something Three do not offer yet, but should be in the future. So, you are getting a future-proofed device when it comes to the network upgrades rolling out.

Looking at the phone up top there is a 2.1 megapixel camera you can use for either selfie photos or for video calling using a wide range of supported apps out there like Skype or Hangouts.

There are a few modes when using this camera, the most popular will be the dual mode where you can insert your face from the front camera into an image capture with the rear shooter. Perfect for sharing with family and friends when on a holiday somewhere nice.

Also up top there’s the earpiece and the light sensor which will adjust the backlight when needed to help save battery. Believe me, saving battery is something you really want here.

Super AMOLED is great for boosting colours, sometimes a little too much but this is down to personal taste.

Below the screen are 2 capacitive buttons for viewing the recently used apps and moving back. Right between these two is a physical button for going “home” or, if you hold it, loading S-Voice. Does anyone really uses that feature?

However, it does also have another trick up it’s sleeve, and that is that the home button is also now a fingerprint scanner. This has also been seen on the S5 and also on the Note 4.

Unlike Apple where you tap your finger to unlock, Samsung make you swipe your finger instead ….just to be different.  Your fingerprint can be used to unlock the phone, but also (in partnership with PayPal) to authorise payments via your account. You just need to set this up via the app.

Sadly, in reality the fingerprint scanner is rather horrible, needing multiple swipes to recognise and unlock the device. So much so that after two days I already had enough and wanted to turn this off. I have never had an issue with on the iPhone 5S or 6.

On the back is a decent 12 megapixel camera, and in recent times Samsung have really impressed with the overall image quality both in colours and detail captured.

There is no dedicated camera button, which is a shame, but that is normal for Samsung. They usually miss it out but you can find it on their K Zoom and S4 Zoom handsets.

You can use the volume up key for a camera shutter, but just be careful how you hold the Alpha though as part of your finger will get in the way due to the camera being right near the top.

Next to the camera is the single LED flash which is quite bright and lightens up photos. A dual LED flash would get better results though.

You also have the more recent technology feature used in some Samsung phones – the heartbeat sensor. This is accessed along with the S-Health app and keeps track of your health.

Whilst this is a good idea and sounds great, do not rely 100% on this feature for medical reasons as results can be slightly off. We would hate for anyone to suffer medically from just using this for data.

Video, like the camera, is pretty impressive and supports a wide range of modes including slow motion and 4K too. There’s also a “fast motion” option which speeds things up if you want to do such a thing.

Whilst the metal frame is nice, don’t let it fool you into thinking this is anything but a normal Samsung device inside. Remove that back cover and it’s as flimsy as ever.

Thankfully, once you have the phone assembled, there is no real need to take the back off, but it is something tech followers will know Samsung for in the past.

On the top you have just the 3.5mm headset port where you can use either the supplied headset or your own.

The ones in the box are pretty good but lots of people will prefer to use their existing pair if you have a really decent pair to hand.

The only other point worth mentioning is that right next to the headset is a little hole. This is a noise cancelling microphone which helps keep your call audio clear when in a busy area. It is also used for capturing audio when recording video on the camera.

On the bottom you have the speaker and this can get very loud when on maximum volume. It doesn’t lose much quality either when it’s loud,  which is great when you are playing music or video via YouTube, Netflix or Spotify.

In the middle is the mostly industry standard MicroUSB port for charging the phone or for transferring data over a USB cable to a computer.

As with the top of the Alpha, there is a little hole at the bottom which does the same job, helping with noise cancellation but also recording audio for video.

There is very little to see button wise on either side of the Alpha, instead you can simply enjoy the silver metal band that goes all the way around making the phone feel very strong and robust.

On the left you have the volume up and down keys which get used the same way any other smartphone does of course, and as mentioned for the camera use, the volume up acts as a camera shutter if you want to use instead of the touch screen.

Over on the right the only button found is the power key for putting into standby, and turning on and off by holding on for a few seconds.

The main feature of the Alpha is the metal band so Samsung would not want to take away from the design adding more than they needed.

The Galaxy Alpha should be the phone most Samsung fans have been asking for. That metal frame adds a definite “something” to the mix and it’s a welcome departure for the company.

However, with a 720p resolution screen, 12 megapixel camera and a lack of external storage, the Alpha is not a spec heavy device that will blow you away. On the other hand, it does provide great build quality and a set of extremely decent mid-range specs at a mid-range price whilst looking like a premium handset.

The camera was actually very good quality, especially if all you do is share on social media. The video was also smooth and clear, plus it was nice to see the addition of 4K recording even if not many people use it yet.

The screen felt a little small at times but that will only be due to me using the Note 4 before this (that has a massive 5.7 inch display). In reality the Alpha is a perfect size for a lot of people at just below the 5 inch mark. It’s not too small though, and let’s not forget that the iPhone 5 has a 4 inch screen!

Software is the traditional TouchWiz running on top of Android 4.4.4. Personally I am not a fan of this UI, but as this is Android there’s a wide range of other launchers available on the Play Store. Google Launcher being my personal favourite and the one that Nexus devices use.

Samsung will roll out 5.0 Lollipop some time in early Q1 which brings some nice changes, even if they are customised like crazy by Samsung.

Overall the positives far outweigh the negatives with the few drawbacks being lack of expandable memory, something a lot of other devices lack anyway

The biggest issue, however, was that battery performance. After using the Alpha for a week and connecting to 3G and 4G I would struggle to get to the evening on a single charge. Often I would top the phone up around lunchtime in preparation for a bus ride home so I can listen to music or check my emails.

The positives though include the great build quality, a great camera with 4K video supported and it’s really slim too.

The Galaxy Alpha is available on Three starting from £28 a month on contract or for £449 on PAYG if you do not want to be locked in. Check out the Samsung Galaxy Alpha deals here.