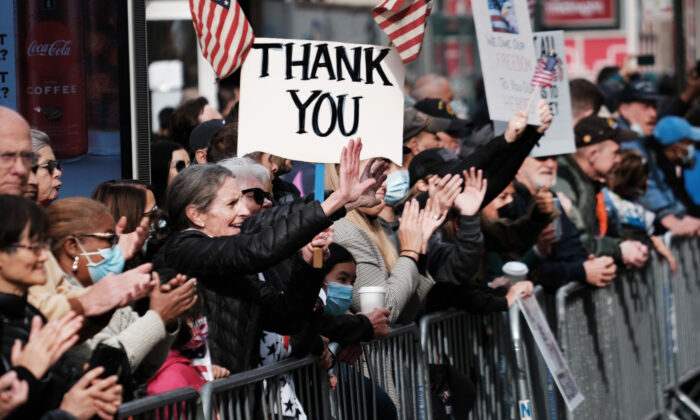 The Veterans Day holiday this week, coming just a few months after the national humiliation that was President Joe Biden’s botched Afghanistan withdrawal, ought to serve as a wake-up for Washington’s myopic foreign policy and national security establishment, as well as our decadent ruling class more broadly. The best way to honor our veterans in the aftermath of the Afghanistan boondoggle would be to finally end the delusional fantasy that America can, let alone should, attempt to cavalierly export its values unto foreign lands.

For decades, varying stripes of neoconservatives, neoliberals and humanitarian interventionists have dominated America’s sclerotic foreign policy establishment. Whatever minute or abstract philosophical details distinguish these schools of foreign policy thought, they have long been united by one overarching, guiding belief: American exceptionalism means the U.S. military should intervene to spread and promote our distinctly American conception of liberty and the good life, even if such interventions do not directly secure America’s national security interest or the American way of life.

The basic problem with this hubris is that it fundamentally misunderstands the U.S. military. As an institution, the military is less well-suited to constructing Madisonian democracies out of backwater hellholes halfway around the world than it is to hunting down and killing terrorists and enemy combatants in the most efficient way possible. This ought to be so obvious that it is somewhat embarrassing it even needs to be said. Nonetheless, whether it was leading Bush-era neoconservatives who sought to “spread democracy” across the sands of the Middle East or Samantha Power-style “responsibility to protect” liberal internationalists who aimlessly toppled Muammar Gaddafi in Libya, the men and women controlling the corridors of foreign policy power in Washington too often fail to intuit this basic reality.

Too many in America’s foreign policy elite bastardize the famously universalist language of the Declaration of Independence, warping it to justify nation-building crusades or outright humanitarian interventions even when those actions have no obvious relevance for America’s national or geopolitical interests, properly defined. This sort of chauvinism is the complete opposite of that most quintessential conservative trait most readily identifiable with the great Anglo-Irish statesman Edmund Burke: epistemological humility. A wiser distillation of the relationship between America’s Founding-era creed and her foreign policy responsibilities was pronounced by then-Secretary of State John Quincy Adams in 1821: “(America) goes not abroad, in search of monsters to destroy. She is the well-wisher to the freedom and independence of all. She is the champion and vindicator only of her own.”

To fail to now vindicate Adams’ prescient admonition, in the aftermath of August’s fall of Kabul to the Taliban, would be shameful. For two decades, the Pentagon, Foggy Bottom and the intelligence community reliably assured the American people that all the blood spilled and treasure spent trying to build a durable Afghan nation-state would not ultimately prove to be in vain. Our highest-ranking generals and other top-tier military brass repeatedly informed us that our soldiers and marines could, and would, train the Afghan military to fight for and defend their homeland. Suffice it to say that did not work: Kabul fell in a matter of days to the jihadis. The tragic reality is that our commander-in-chief cannot now visit any of the Gold Star families who lost a loved one in Afghanistan and earnestly tell them that their departed loved ones did not die in vain.

The men and women who deploy and serve overseas, especially those in combat roles, are not pieces on an ivory tower chess board. They are not easily reducible to pawns in a graduate school game theory model. They are real human beings—patriotic Americans, disproportionately from the heartland, with parents, spouses and children. If respect for the sanctity of human life and an enduring belief in the Declaration’s right to life mean anything at all, they should militate strongly against a more casual willingness to deploy military force abroad. What’s more, the sheer decadence of our ruling class and generally sordid state of our domestic political morass really should make elites think twice next time before sending our uniformed men and women into harm’s way without a clearly delineated and demonstrably attainable military objective.

If our elites can actually learn this common-sense lesson, it would be the best Veterans Day lesson of all.