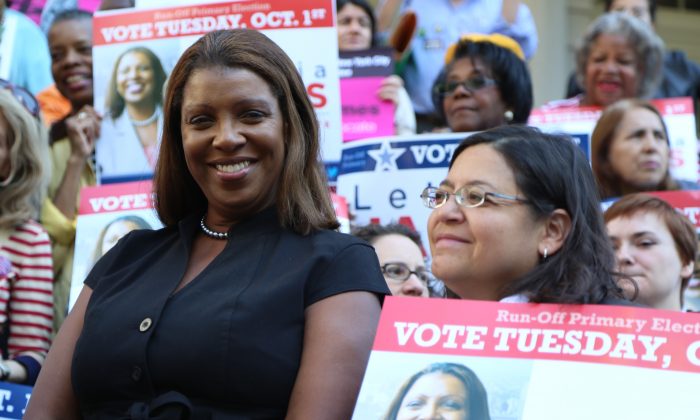 NEW YORK—Letitia James was elected to the office of public advocate Tuesday night taking home 85.8 percent of the as of 10:16 p.m. James is the first African-American woman to hold a citywide office in New York City.

“I am humbled to join you announcing that we have won the election and we are on our way to the office of Public Advocate,” said James at her election party in Brooklyn just after 9:30 p.m.

“Throughout this campaign there’s been a lot of talk about history—that I am the first woman of color to be elected to a citywide office in New York City. Yes, this is indeed historic. Because our government must be representative of all New Yorkers,” she added.

James has served on City Council since 2003 representing District 35 in Brooklyn. She was the first person to question the CityTime payroll scandal and voted in favor of the Safe Housing Act in 2007.

James will follow in the footsteps of mayoral hopeful Bill de Blasio, whom she called a “close friend” during a primary debate. She will have to keep her friendship in check if de Blasio is elected.

The office of the public advocate is designed to watch over citizens who are not being taken care of by the city. De Blasio, the current public advocate, has used the office to sound off on current Mayor Michael Bloomberg’s policies, something that has earned him praise in a job with little authority.

James said her focus would be on ensuring more affordable housing and advocating for wage increases, something de Blasio has also advocated for as public advocate.

The public advocate’s race required a runoff to settle the Democratic nomination. Three weeks after the Sept. 10 primary, James and state Sen. Dan Squadron competed in a runoff that cost the taxpayers nearly $20 million—more than the budget for the office of public advocate for all four years the candidate would be in office.

Both candidates said they would push for election reform such as instant runoffs, if elected.