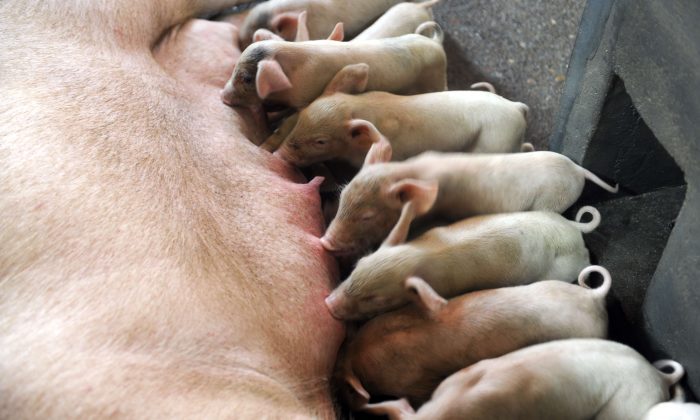 A litter of piglets at a farm in Zhejiang Province on June 21, 2011. A virus that has been killing piglets in the United States is thought to have come from Anhui Province, according to a new study. (STR/AFP/Getty Images)
China

A virus that has been killing piglets in the United States is thought to have come from Anhui Province, possibly from bats, according to a new study.

The porcine epidemic diarrhea virus (PEDv) kills 80 to 100 percent of very young pigs, but does not affect humans nor food safety.

The number of animals that have died in the United States has not been confirmed, because outbreaks do not have to be reported. However, since the beginning of October, there were over 700 known cases in 18 states, according to official data, with each one possibly representing thousands of infected animals.

Published in the American Academy of Microbiology journal mBio, the paper compares DNA in PEDv strains collected from infected American piglets versus samples from China during a 2010 outbreak in Anhui Province.

The results showed that the three strains now in the United States are most closely related to particular Chinese strains. However, the scientists said in their study that currently it is difficult to pinpoint the “exact source of the origin.”

The virus is expected to spread as temperatures drop in the United States and piglets are being born.