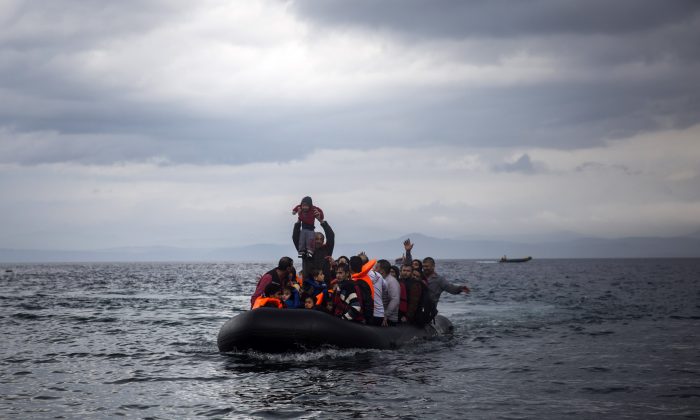 A man holds up a young girl as they arrive with other migrants on a dinghy from the Turkish coast to Skala Sikaminias village on the northeastern Greek island of Lesbos, Wednesday, Oct. 21, 2015. Greece is the main entry point for those fleeing violence at home and seeking a better life in the European Union. More than 500,000 people have arrived so far this year on Greece's eastern islands, paying smugglers to ferry them across from nearby Turkey. (AP Photo/Santi Palacios)
Europe

BREZICE, Slovenia—After too many days and nights stuck outside in the rain and cold, tempers are fraying among the tens of thousands of migrants trying to get through the Balkans to the heart of Europe.

A fire at the main refugee camp on Slovenia’s border with Croatia destroyed a dozen lime green army-issue tents Wednesday as scores of mostly young male migrants nearby chanted, “Let us go! Let us go!”

While the government said it was still investigating the cause, police at the scene told The Associated Press that migrants had set a stack of UNHCR-supplied blankets deliberately on fire to protest conditions in the camp on the outskirts of Brezice.

Many of those demanding to leave the Slovenian border town for Austria, Germany and other European Union nations to the north had waded the previous night through the Sutla River, which marks the border between Slovenia and Croatia, in frigid conditions made worse by their soaked clothes. Sometimes in the pitch dark, at other times aided by light from a police helicopter’s searchlight, more than 1,000 souls strode chest-deep into the muddy waters on the Croat side and struggled up the muddy embankment into Slovenia.

Many migrants from the Middle East, Asia and Africa expressed bewilderment and disappointment because they had been told as they began their journeys in Turkey that the hard part would end once they reached EU countries like Croatia and Slovenia. Many had expected other countries to permit them free passage to wealthier western countries, particularly Germany, that they hope to make home.

“I am sorry for Europe,” said Ari Omar, an Iraqi, who was resting in a Slovenian pasture a few hundred meters (yards) from the border with Croatia. “We did not think Europe is like this: no respect for refugees, not treating us with dignity. Why is Europe like this?”

More than 21,500 people have crossed that frontier in the five days since Hungary—the previous favored EU entry point for migrants crossing the Balkans—closed its borders with Croatia and forced the human tide further west into Slovenia. This Alpine country of barely 2 million says it cannot cope with the volume of human traffic and is appealing for EU financial and security aid. Lawmakers passed an emergency bill permitting Slovenia’s military to operate more freely along the border, and more than 200 troops were deployed Wednesday in armored personnel carriers at several crossing points and camps.

Slovenia’s interior secretary of state, Bostjan Sefic, told reporters in the Slovenian capital of Ljubljana that troops would have greater freedom to tackle crowd-control tasks on their own, because the country didn’t have enough police for the job. He said tensions were running highest at the camp in Brezice, the scene of Wednesday’s fire. He said the facility—tents in fields beside a warehouse—was designed to hold 250 people, not the 4,000 or more who have passed through since Tuesday.

In a statement Sefic blamed the tensions on “unannounced excessive numbers of people deliberately sent to the border by Croatia.” Reflecting Slovenia’s lack of sufficient shelters, more than 3,000 people who crossed the border Wednesday night were ordered to sit in cornfields, surrounded by police and soldiers, until buses could deliver them north to Austria.

Sefic said the travelers “just want to go on their way as soon as possible. They are very dissatisfied and unrestful.”

Slovenia’s president, Borut Pahor, has spent the past two days in Brussels lobbying EU leaders for help. European Commission President Jean Claude Juncker announced a special summit Sunday seeking a regional strategy for managing the migrant flow involving Austria, Bulgaria, Croatia, Macedonia, Germany, Greece, Hungary, Romania, Serbia as well as Slovenia. For months, a steady stream of asylum seekers has traveled from EU member Greece north through non-EU members Macedonia and Serbia to reach what the travelers hope will be an easy entry point to the passport-free EU zone. But the route has grown increasingly difficult as Hungary shut access from Serbia in mid-September and then closed the door to Croatia on Saturday.

Those already freezing in Balkans fields cannot wait any more days for improved EU management of the humanitarian crisis and are voting with their feet whenever police permit them.

In Austria, at least 1,000 people broke free from a police-supervised camp and walked north on a small road parallel to the highway leading to the city of Graz. Police spokesman Fritz Grundnig said officers were accompanying the marchers and not trying to stop them, merely barring them from directly walking on the highway.

A similar border breakout took place Wednesday morning on the Serbian-Croat border, where hundreds who had spent the night trying to sleep unsheltered in freezing farm fields marched across the frontier in a challenge to Croat border police, who deployed to block them but backed off. A U.N. refugee agency official, Francesca Bonelli, said about 3,000 people in total camped out overnight on that border, including many elderly and ailing people.