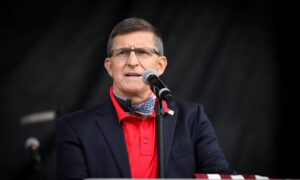 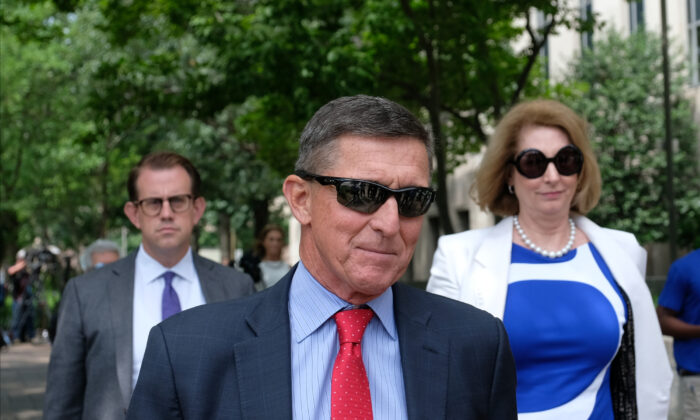 ‘Let Me Be Very Clear’: Michael Flynn Responds to Reports About Endorsing ‘Coup’

Former Trump advisor and retired Lt. Gen. Michael Flynn denied claims over the weekend that he supports a Burma-style coup in the United States.

In comments published on Telegram and Parler, Flynn wrote that mainstream media outlets manipulated his words and took them out of context.

“For all the fake news ‘journalists’: Let me be VERY CLEAR,” he wrote, “there is NO reason whatsoever for any coup in America, and I do not and have not at any time called for any action of that sort.”

“Any reporting of any other belief by me is a boldface fabrication based on twisted reporting at a lively panel at a conference of Patriotic Americans who love this country, just as I do,” he continued, adding that he is “no stranger to media manipulating my words and therefore let me repeat my response to a question asked at the conference: There is no reason it (a coup) should happen here (in America).”

Sidney Powell, who filed several third-party lawsuits on behalf of former President Donald Trump and who had represented Flynn in a case, said that the media “grossly distorted” his comments, adding that he doesn’t endorse “any act of violence or any military insurrection.”

Over the past weekend, a number of news outlets including The Hill, CNN, MSNBC, and others reported that Flynn had attended a conference on Sunday where he was asked by an audience member: “I want to know why what happened in Myanmar can’t happen here?” Myanmar is also known as Burma, and the audience member mispronounced the name.

“Flynn’s remarks border on sedition. There’s certainly conduct unbecoming an officer. Those are both things that can be tried under the Uniform Code of Military Justice and I think that as a retiree of the military, it should certainly be a path that we consider to have consequences for these types of words,” said Rep. Elaine Luria (D-Va.), according to CNN.

In late 2020, Trump pardoned Flynn in a move that ended a yearslong criminal case related to the Russia investigation. The former adviser had pleaded guilty to lying to the FBI about speaking to a Russian diplomat during the 2016 transition period after Trump won the presidency, although Flynn withdrew his plea before the sentencing was handed down.

Trump, Flynn, and others have categorically denied any collusion efforts with the Kremlin. Meanwhile, former special counsel Robert Mueller’s yearslong investigation didn’t reveal any such collusion.

Earlier this year, Flynn’s brother and brother’s wife filed a lawsuit against CNN for $75 million relating to the network’s allegations that they are supporters of QAnon.