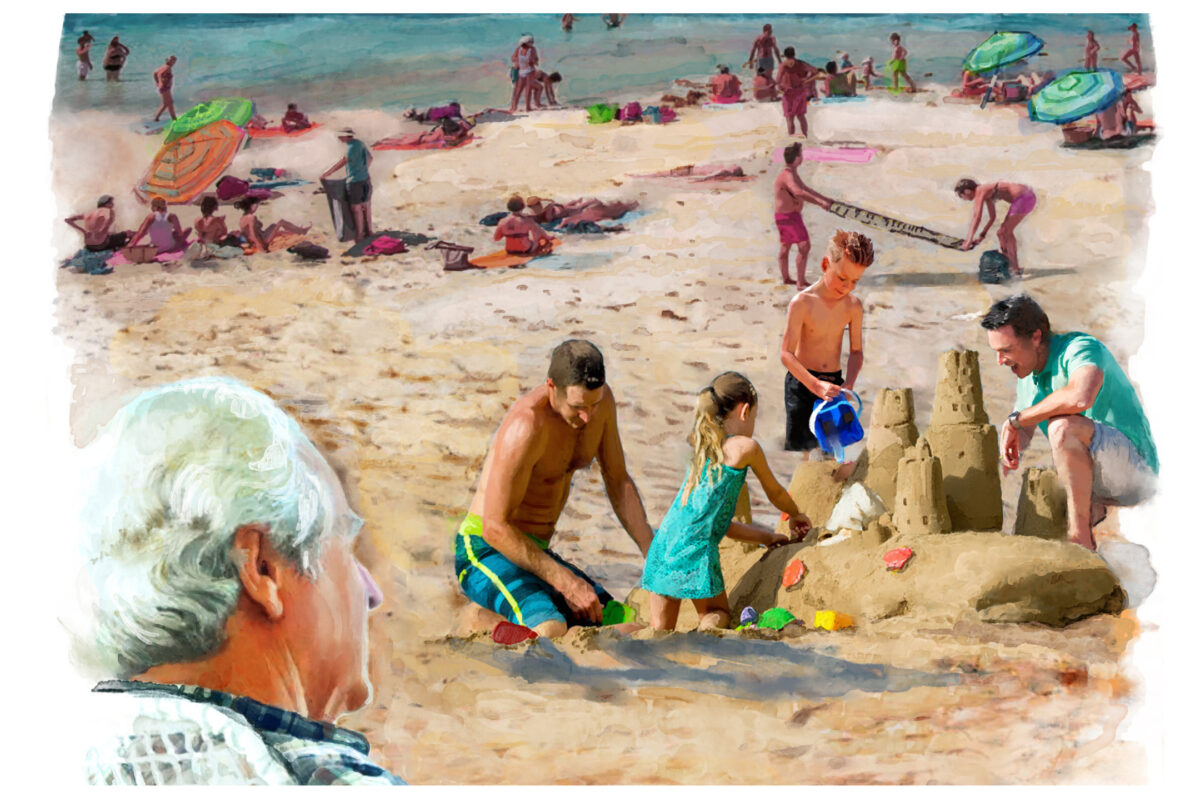 Ordinary Americans on this beach clearly cherished beauty and the fundamentals of living, their capacity for joy undiminished. (Biba Kayewich)
Life & Tradition

“I hear America singing, the varied carols I hear” begins Walt Whitman’s poem “I Hear America Singing.” Though published in his “Leaves of Grass” poetry collection in 1860 with the Civil War looming, Whitman’s verse celebrates the American work ethic, individuality, and the unity of the country.

Things are different today. We may have occasionally heard America humming in the past few years, but in the aftermath of the COVID pandemic, the Afghan debacle, the out-of-sight spending by our government, and all the other body blows suffered by our republic, a modern-day Whitman would be hard-pressed to imagine America as a songfest. Add in the bite of inflation and a recession, and the “varied carols” he might hear at this point would more likely be dirges or anthems of bitter protest.

Like so many others, I have lately felt disheartened by the direction taken by our country and culture. Nearly every day, we find ourselves aboard a ship where the rudder is broken, a storm has shredded the sails, and the captain hasn’t a clue as to what he’s doing. Some of my friends and family members who follow the news have come to believe that this ship, America, is foundering and may well sink.

But is that really the case?

It’s the middle of August as I write these words on Topsail Island, a 26-mile barrier island just off the coast of North Carolina. As so often happens during a break in my routine, a getaway outfits me with a new pair of glasses that lets me observe people, the terrain, and the culture almost as if I were a visitor to a foreign land.

My stint as an amateur anthropologist commenced about 30 miles from my residence in Front Royal, Virginia, when, recently, a granddaughter and I stopped at Williams Orchard in Flint Hill. We were there to pick up some peaches at the request of John, my friend from Richmond and unofficial godfather to some of my grandchildren. Williams Orchard, I discovered on my arrival, was an unexpected treat. Having existed for more than a century, it’s out in the countryside, and the woman who sold me a half-bushel of peaches couldn’t have been more affable.

Three hours later, after picking up John, we hit I-95, which immediately lived up to its reputation as the expressway from hell. Traffic would zip along at 70 miles per hour or more, then would inexplicably drop every couple of minutes to a snail’s crawl. After half an hour of this frustrating up-and-down pace, we left the interstate and took back roads the rest of the way to the coast.

That detour delivered a gift similar to the one I received at the orchard. As we cruised through farmland and sleepy Virginia towns, America seemed to me to come vividly alive. Interstates deliver a faster ride, but those boring and blinkered highways serve no other purpose than to drop you at a destination as swiftly as possible. On the backroads we traveled that afternoon, however, fields and forests advanced to the road’s edge, American flags adorned farmhouse porches, and for lunch, we swung directly into the parking lot of a barbecue joint.

Lesson No. 1: Whether on the expressway or in the hurry-and-bustle of everyday life, speed can cause us to miss the beauty that dwells in the ordinary. Secondary lesson: We exercised the right of choice and left one highway for another. That’s called freedom.

Our first weekend at the beach was brilliant, with sunshine and blue skies. From the deck of my son’s house, I could look down on the sand and waves, where near and far, about 300 vacationers were bobbing in the ocean, digging in the sand, talking in clusters beneath umbrellas and tents, playing cornhole, fishing, and walking along the tide line. Directly beneath me was my own platoon of grandchildren, bogey boarding, searching for shark teeth, the little ones running scissor-legged back and forth across the tide line, and at one point constructing, with the help of two of their fathers, an enormous castle of sand.

America might not be singing, but on this bright shore, people were laughing and shouting, high as kites on simple pleasures.

Lesson No. 2: “Beauty,” Fyodor Dostoevsky writes, “will save the world.” In their love and appreciation of family and friends, and the splendors of nature, the ordinary Americans on this beach still clearly cherished beauty and the fundamentals of living. Despite the trials of the past few years and our current troubles, their capacity for joy had remained intact.

Directly across the street behind my son’s beach house is a park for campers and recreational vehicles. Every time I see it, these vehicles are jammed together tight as herrings in a tin—you’d have to respect property rights and the golden rule if you bedded down in this encampment. Above this square half-block of real estate flew six U.S. flags. Some of these caravanners came to enjoy the pleasures of the island, but the majority were here to fish the waters of sound and surf.

Near the causeway to the mainland is an IGA grocery. On this particular Sunday afternoon, the store was busy with new arrivals on the island. A manager manning one of the cash registers, a friendly mid-50s man, wished us a good stay and disclosed during our brief exchange that this area first attracted him 30 years ago, when he was a Marine stationed at nearby Camp Lejeune.

On the two-mile drive from the IGA back to Tiffany’s Motel—John and I were sharing a two-bedroom suite, as my son’s four-bedroom house overflowed with three adults and 12 grandchildren—we passed block after block of homes, their ranks broken here and there by bars, cafés, beach apparel shops, and convenience stores. The thought occurred to me that these vacation houses may have been constructed from wood, cement, and vinyl siding, but they were built out of dreams.

Back at the motel, I met a young man from Maine who owns and operates a local lobster shack and who informed me that he daily flies in lobsters from his home state. He must be doing all right; he’s a long-term renter at the motel but has just purchased a nearby house.

Lesson No. 3: On Topsail Island and, I would imagine, all across this country, the American dream of freedom and enterprise is alive and breathing. It was discernible in those houses and in every person I met, though freedom itself was never mentioned.

In all three of these lessons lies an implicit final lesson: Most Americans are capable of governing themselves. Like earlier generations, they wish to exercise the natural liberties granted to them by providence to make their own decisions as to how they will spend their time and money.

Moreover, despite their critics, most Americans in every walk of life recognize that the foundation of these liberties is responsibility. They prefer to accept personal responsibility for which highway they take—whether in a car or in life—to embrace reality rather than the smoke and mirrors of big government, and to do all they can to pursue and keep alive their visions.

Along with many sweet memories of my kids and grandkids, these revelations are the treasures that I’ll carry home with me from the beach.