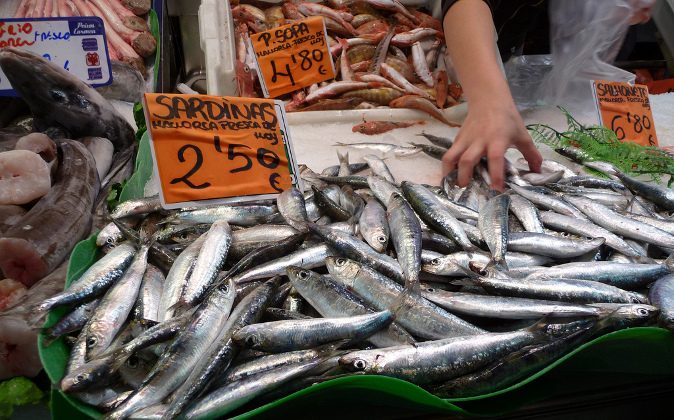 Young and old, we can catch them for you wholesale.(Flickr/bwalsh, CC BY-NC)
Environment

The Mediterranean Sea holds some of the most heavily fished waters in the world, and a recent paper has revealed the extent to which the sea – which has 19 nations on its shores – has been exploited.

Academics from the Institute of Marine Biological Resources and Inland Waters in Greece, writing in the journal Current Biology, examined catches of nine species including hake, mullet, anchovy, sardine, sole and turbot from 1990-2010. The decline of the Mediterranean fisheries started much longer ago, but compared to the success of the EU Common Fisheries Policy in reversing the decline of fish stocks in parts of the North Atlantic and North Sea over the same period, current fishing patterns have prevented any recovery. With many stocks in continued decline, the authors argue this “skeleton in the closet” must be addressed, as the social and economic impact of a collapse of Mediterranean fisheries would be immense.

The focus on large fish, characteristic of small-scale fisheries which are still very important in the Mediterranean, has affected species’ reproductive potential. By hunting only the larger fish, it’s possible to eradicate some of the best genetic material of the species – larger spawners also usually have higher fertility and better egg quality. So the strategy of “fishing for big ones” followed by some fishers in the Mediterranean must be well managed – something which is not yet happening.

Protect the Young and the Old

For the millions of tourists heading to the Mediterranean in summer, a marine reserve or natural park means a beautiful place where they can enjoy the sea and its creatures during their holidays. But marine reserves are vital for fisheries management too, as they protect the fish inside, providing a safe haven for building up stocks of larvae and adults who then move behind their watery frontiers to replenish stocks elsewhere.

Existing marine reserves are mostly coastal but new reserves to protect the deeper waters offshore should be planned. Large spawners – older, strong and fertile fish important for ensuring a strong subsequent generation – often inhabit particular habitats offshore that for many years functioned as refuges, with fishing pressure absent or low. But increasingly even these areas have been exploited, using techniques such as bottom long-lines to reach large fish, such as the hake found in underwater canyons in the Gulf of Lions in the northwest Mediterranean.

At the other end of the lifecycle, young fish also tend to concentrate in particular areas of the seabed. It’s vital to protect spawning grounds (where spawners come to breed) and nurseries (where juveniles concentrate) through the establishment of new Mediterranean marine protected areas. This should be part of an ecosystem-based management approach, together with technical requirements to improve fishing gear and techniques to ensure better selectivity of fish size and species.

Discards Are Unethical and Unsustainable

The small net mesh size used in the Mediterranean leads to a much higher rate of fish discards. The Common Fisheries Policy now aims to reduce unwanted by-catch and consequently reduce discards policy by requiring all catch to be landed. But the ecological benefits of this policy are very doubtful – fish that would otherwise be discarded may end up driving new markets for protein and oil, either for humans or as animal feed. The tide could turn against the discard policy if it provides incentives for fishers to target fish species or sizes that were previously ignored.

A final problem yet to be solved is that fisheries management is based on constraints and quotas set largely in accordance with social and political targets. Yet the seas are subject to ecological forces, many still largely uncontrolled. Unavoidable climate changes will lower productivity of certain stocks and favour others. Any changes we make through ecosystem-based management must maximise benefits today, but only if they don’t damage prospects for the future.

Josep Lloret receives funding from the Spanish Ministry of Economy and Competitivity through a “Ramon y Cajal” research contract. Jordi Lleonart receives EU and Spanish government research funding. Hans-Joachim Raetz does not work for, consult to, own shares in or receive funding from any company or organisation that would benefit from this article, and has no relevant affiliations. This article was originally published on The Conversation. Read the original article.