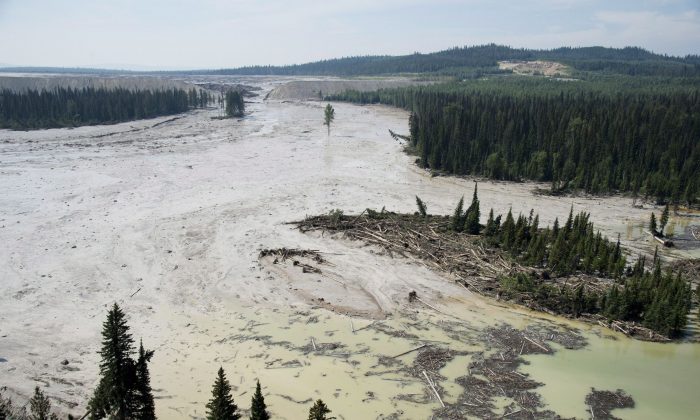 An aerial view shows toxic waste from the tailings pond breach at the Mount Polley Mine spilling into Hazeltine Creek on Aug. 5, 2014. (The Canadian Press/Jonathan Hayward)
Canadian Content

The B.C. economy—already facing what seems like the perfect economic storm of stagnant job growth, an acute skills shortage, and the recent Supreme Court of Canada decision on First Nation land title claims—can now add one more low-pressure system into that mix: the Mount Polley Mine disaster.

In the wake of the disaster, to date the government has announced delays to Imperial Metals’ Red Chris Mine and the suspension of the environmental assessment of the Morrison open-pit mine project northeast of Smithers. For the mining sector—which had wanted environmental assessments and mine approvals reduced from upwards of ten years to as little as three—Mount Polley threw a big wet dishrag on that one as well.

But what hurts the most about Mount Polley? It may prove, at least in part, to be self-inflicted, laying waste to that old cliché that a penny saved is a penny earned.

In its obsession to balance the budget at all costs, the B.C. government may have overlooked the fact that cutting corners doesn’t always pay off in the long run. Sometimes you need to spend money in order to save it.

As part of its 2001 “Core Services Review: The Original” (not the sequel), the government of Gordon Campbell cut the public sector by roughly 7,000 positions. Red tape was out, deregulation was in.

According to the senior mandarins of the day, industry could be trusted to inspect itself for the most part, with an occasional personal appearance from a government inspector but never obtrusively so.

Despite early warning signs from the Walkerton tragedy in Ontario that cutbacks might not work out so well, the Campbell government continued on its merry cost-cutting way.

A few months later, in 2002, Justice Dennis O’Connor, who had been appointed by the Ontario government to conduct the Walkerton Inquiry, formally concluded that government cutbacks had made the environment ministry less capable of identifying and dealing with environmental problems.

Fast forward to 2010, when the Testalinden Dam burst near Oliver, B.C. Commenting on the failure at the time, B.C. Public Safety Minister Michael de Jong stated: “Going forward, we will ensure communities are better protected from this kind of risk.” That commitment didn’t work out so well.

And just as there were early warnings over the Testalinden Dam, there were also warnings with Mount Polley.

Lessons Start at the Top

If the lessons from Walkerton and Testalinden didn’t sink in, maybe this time they will. As they say, third time lucky. Some of those lessons start at the top.

First of all, political leaders who like parades need to be present when communities are hurting and shouldn’t have to be chased by the media to show up.

All-point bulletins shouldn’t have to be issued for key ministers to report for duty, either. It sucks when things go wrong on your holidays, but you signed up for the job, and that means being available to your office 24/7, 365 days of the year. Out of cellphone range doesn’t cut it.

The government needs to shoot straight with the public. No more references to toxic sludge as “fine sand,” comparing a tailings dam breach with an “avalanche,” or saying “this shouldn’t have happened.” British Columbians had that last one figured out all on their own without the assistance of the Government Communications and Public Engagement office.

The government’s duty, first and foremost, is to British Columbians, not the shareholders of Imperial Metals. They can handle their own PR.

Stop trying to defy gravity. Case in point: in an Aug. 8 interview on CBC Radio, Environment Minister Mary Polak claimed that “the number of inspections of mines has not changed” since the Liberals came to power in 2001. On the very same day, David P. Ball reported in The Tyee that the number of mine inspections in 2001 was “nearly double the number as there were in 2012.”

And while it may seem an eternity ago, only last year British Columbians were being promised yellow brick roads paved with $100 billion in LNG prosperity gold. Such promises seem more fanciful by the day.

But despite that hoopla, the single biggest job creation project in B.C. for 2014 may very well be the cleanup at the Mount Polley Mine.

Dermod Travis is the executive director of IntegrityBC.