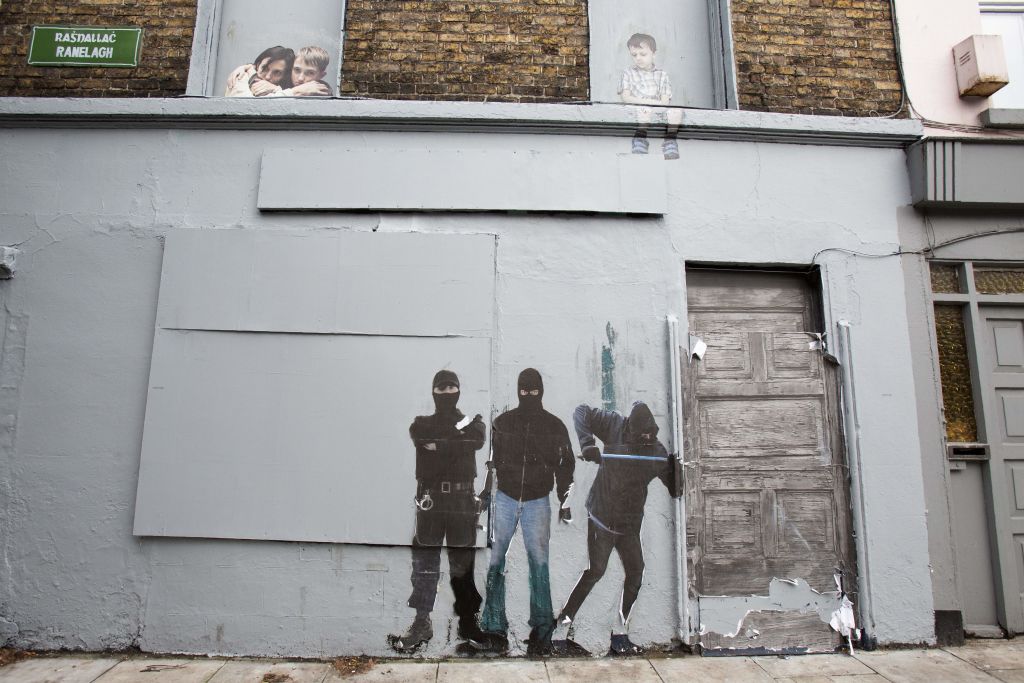 Murals are seen on a boarded-up property in Dublin, Ireland on Dec. 10, 2018. (Paul Faith/AFP via Getty Images)
Australia

On Aug. 1, only 716 homes were available for rent in the whole of Ireland, a country of five million people.

The result? In one instance, hundreds of hopeful renters were photographed—by podcaster Conor Finn—waiting outside a property in Dublin.

“Been here almost 30 mins, barely any movement, and 50+ more have joined the queue,” he writes on Twitter. “An hour later, and I’ve left the queue after no real movement or chance of viewing the house tonight.”

Housing experts say years of pressure on so-called “greedy landlords” has finally broken the camel’s back—a situation that should serve as a warning to other developed countries confronting their own rental crises.

Prior to the housing market crash of 2008, around 23,400 properties were available for rent in Ireland, with 8,000 in the capital Dublin.

However, that number has dwindled while regulations on landlords have ratcheted up, including moratoriums on evictions, the removal of tax deductions for investment properties, and rent controls.

On the latter, within Ireland’s 50 designated Rent Pressure Zones, rent increases are capped yearly at either two percent or in line with the inflation rate, whichever is lower. So if inflation were to increase 1.2 percent, then landlords can only increase their rent by 1.2 percent.

These tight restrictions have slowly chipped away at the pool of landlords previously willing to offer properties for rent, according to Pete Wargent, co-founder of BuyersBuyers in Australia.

“The balance is tilted too far away from private landlords,” he told The Epoch Times. “People just think it’s probably easier to put their money somewhere else, either into the stock market, commercial property, or other asset classes.”

Clamping Down on Landlords in Other Jurisdictions

Jurisdictions like California in the United States have deployed similar measures, while in Australia, governments have moved the dial slower.

To cope with its housing affordability crisis, Californian authorities passed sweeping laws, including AB-1482 that limit rent increases to five percent per year annually plus inflation.

But Wargent said government intervention of this nature always results in unintended consequences.

“If you’re going to cap rental prices on the way up, you’re just going to have fewer landlords,” he said, noting that the costs of property ownership are going up whether it’s due to maintenance, new taxes, or increases in mortgage rates in line with interest rate spikes supposed to deal with inflation.

“Some landlords will just become sellers basically [if they can’t cover those costs]. So, it might exacerbate the shortage of rental properties,” Wargent said. Around 45.14 percent of households in the state are renters.

Australian jurisdictions have, in recent years, also ratcheted up the regulatory burden on property owners. Currently, around 26 percent—2.4 million—households are renting with the majority of housing supplied by regular investors.

In the Australian Capital Territory (ACT), the Labor-Green government is offering a A$2,500 grant to help property owners replace kitchen appliances and heating systems not deemed “sustainable.”

While the ACT and Victoria have banned “rent bidding”—preventing landlords from inviting bids higher than the advertised price—as well as removing “no grounds eviction,” meaning landlords can only evict tenants based on regulated reasons outlined by a government authority.

Meanwhile in Queensland, the state’s peak real estate body, the Real Estate Institute of Queensland, advised landlords on how it could circumvent its recently introduced “no grounds eviction” rule, telling landlords they needed to make sure Form 12’s were completed to lock in clear start and end times for rental contracts.

The move to tighten pressure on landlords comes despite smaller Australian capital cities struggling with low vacancy rates driven largely by inter-state migration away from Sydney and Melbourne—both cities were placed under the heaviest lockdowns during the pandemic.

The Horse Has Bolted on the Housing Market

Wargent says governments have not taken the task of building extra housing seriously.

“If we’re serious about increasing the supply, we should allow foreign investors back into the market. But they’ve effectively been taxed out over the past five or six years,” he said.

“If you think back to 2015 or 2016, there was construction happening everywhere all over Sydney, Brisbane, and Melbourne, and that was largely because developers could get projects funded by selling a proportion of them overseas.”

Another ongoing problem is supply chain shortages of key materials like timber.

“From the late 80s onwards through to today, we basically turned those state forests into national parks, and we kicked out the saw millers and farmers,” he told The Epoch Times, saying the situation was replicated across several industries, eventually driving up the cost of building.

He also said red tape and government fees were two major issues adding time and money to the process.

“Every year, the fire regulations get tougher, and there are more improvements to disability access and thermal efficiency. All these things keep getting added on and on,” Newman said. In fact, from 2022, landlords were required to ensure every bedroom on their property had a smoke alarm.

“Government has to ruthlessly and relentlessly look at everything that’s happening in building a new home, how delays have been caused, and how suppliers are restricted.”