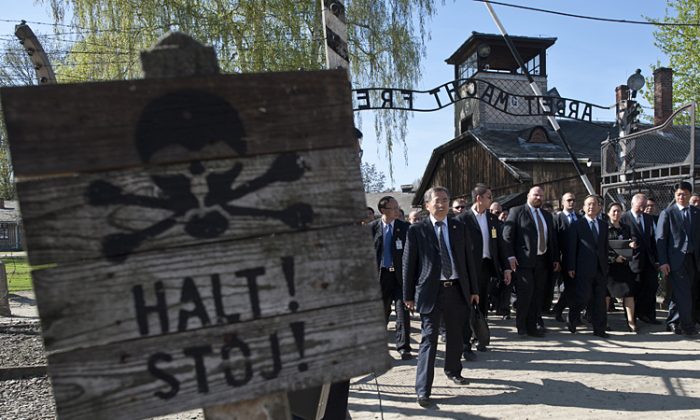 “The tragedy of Auschwitz is a tragedy for all of humankind,” said Premier Wen Jiabao of the Peoples’ Republic of China on a visit to Auschwitz on April 27. “The disaster has passed, but the warnings it wrought will remain forever,” Wen said at the close of his remarks.

Wen then signed the guest book outside Auschwitz with these words: “Knowing history, we are able to plan for the future.”

Auschwitz has since its liberation in 1945 been a byword for human evil. An estimated 1.3 million people, the vast majority Jews, as well as Poles, Gypsies, and others were exterminated by the Nazi regime there.

Wen’s evocation of Auschwitz occurs within the context of rapid changes taking place in Beijing that make possible discussing a new kind of future for China.

Former Party heavyweight Bo Xilai has been relieved of all his Party posts and is under investigation.

Zhou Yongkang, current Permanent Standing Committee member and head of the powerful Political and Legislative Affairs Committee, has been reported also to be under investigation.

Bo’s cronies in Chongqing have been purged, and Party head Hu Jintao and Wen have been busy lining up the military and various leading Party figures behind them. A major change in who runs China is taking place.

As Hu and Wen assert themselves, the world—and the people of China—are waiting to have this question answered: what does this change mean? After the dust settles, will this be a mere reshuffling? Or will something new emerge?

Wen has all of his career been associated with those who want to bring reform to the Chinese Communist Party (CCP). In his speeches he regularly mentions the need to bring the rule of law and democracy to China and speaks of a China in which the government is independent of the CCP—an unthinkable prospect for someone like Bo Xilai.

But what Wen spoke of at Auschwitz is something more fundamental than the rule of law or the promotion of democracy.

His remarks at Auschwitz, with their discussion of how countries deal with having committed terrible crimes, were prefigured by something Wen said towards the close of his press conference on March 14, at the end of the National People’s Congress. Wen asked for the understanding and the forgiveness of the Chinese people.

Political commentator Zhang Tianliang has pointed out that one may ask for understanding for committing a mistake. One asks for forgiveness for having committed a crime.

The CCP has a long history of crimes. There have been an estimated 80 million unnatural deaths due to the CCP’s tyranny. But Wen as premier bears no responsibility for the bloody campaigns carried out under Mao.

The crime that hangs heavy over Wen, and over the entire CCP, is the persecution of Falun Gong. Insiders have reported that in Party councils Wen has asked that the Falun Gong issue be redressed—that the practice of Falun Gong no longer be treated as a crime by the CCP and the persecution be brought to an end.

Bo and Zhou, the two most prominent CCP officials to have lost out in the past few months, each took the lead in enforcing the persecution of Falun Gong.

“This history tells us that we must oppose war, racial discrimination and atrocities. Countries that have unleashed war and brought disaster upon humanity must approach history in an appropriate way, learning lessons from it,” Wen said. “Only then, when they are able to admit to their crimes, to their guilt, can they be respected by the international community.”

At Auschwitz, Wen looked to history to provide instruction on how to deal with having brought “disaster to humanity.”

While he spoke of how countries need to admit their crimes, he knows very well that the Chinese nation did not commit the atrocities against Falun Gong. The CCP committed those crimes. Bo, Zhou, the former CCP head Jiang Zemin, and others that were part of Jiang’s gang, insisted on the carrying out the evil of the persecution.

100 million Falun Gong practitioners and their families have been victimized. Tens of thousands have been killed. And the persecution, along with the CCP’s multitude of other human rights violations, has brought shame to China.

When a nation has been both victimized and disgraced by crimes committed in its name, the nation recovers its honor and its self-respect by bringing to justice the criminals. When the Chinese people try those responsible for the persecution of Falun Gong, they will separate themselves from the crimes of the CCP. The Chinese people will reclaim their dignity and put China on a new moral basis, one that asserts the sanctity of life and conscience.

Wen’s words at Auschwitz have shown the Chinese people that their path to the future requires their repudiating the crimes of the past.