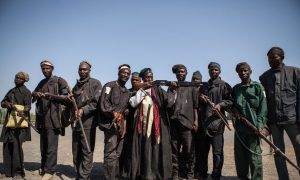 Lessons Buhari Can Learn From Obama About Managing a Tough Economy

It is atypical for an American president to invite a nascent African head of state to the White House, especially less than one month after the latter’s inauguration.

Therefore, to some observers, U.S. President Barack Obama’s invitation of his Nigerian counterpart, Muhammadu Buhari, to a White House parley scheduled for July 20 would seem to be an aberration and a surprise. But an analysis of both leaders’ circumstances suggests that such a meeting is a no-brainer.

Buhari and Obama were elected during a period of economic turmoil and distress. When Obama was elected in 2008, the U.S. economy was in dire straits and reminiscent of the contemporary Nigerian economy. With the unemployment rate hovering around 10 percent, the U.S. economy was losing 800,000 jobs monthly. Budget deficits were spiraling, pushing the country’s debt stock to unsustainable levels.

Like Buhari, Obama not only met an empty treasury, but was also saddled with a whopping debt burden of about $10 trillion–or 72 percent of GDP.

Both presidents also inherited expensive and drawn-out wars that they pledged to end. Ending the wars in Afghanistan and Iraq was a major mantra in Obama’s election campaigns in 2008. In Buhari’s campaign, a major platform was the promise to end the scourge of Boko Haram.

Just as Nigerians clamored for change during the last elections, Americans desperately wanted change in 2008. When people clamor for change, they’re taking a big risk.

But, looking back, many Americans would say that the risk they took in 2008 was well-calculated. The U.S. economy has rebounded. Unemployment has fallen from 10 percent in 2009 to the current level of about 5 percent. The U.S. budget deficit is now less than half of what it was when Obama first took office.

Obama has also significantly reduced the presence of American troops in Afghanistan and Iraq. In a sense, he has virtually fulfilled all his election promises well ahead of the end of his presidential tenure.

Given the striking similarities in both leaders’ circumstances, Buhari would do well to borrow Obama’s economic “magic wand.” If he does, he’ll be surprised to learn that Obama turned the U.S. economy around not through austerity measures, but by spending more.

A few days after his election, Obama appointed Harvard economist and former Treasury secretary Larry Summers as his chief economic adviser. At the same time, he announced his intention to launch an economic stimulus program at a scale never seen before in the country.

Obama justified the stimulus program by referring to the severity of the economic challenges he inherited. Despite push backs from Republicans in Congress, he managed to implement a stimulus program worth almost $1 trillion. His strategy was predicated on the premise that the way to resuscitate the economy is not through belt-tightening, but via expansionary fiscal and monetary policies.

Shortly after Obama’s inauguration, Americans began to receive stimulus checks in their mailboxes or get temporary tax relief. As an unapologetic proponent of “Middle-Class Economics”—the notion that a virile middle class is a sine qua non for a robust economy—much of Obama’s stimulus money went to middle-class Americans.

Though Buhari has yet to formally unveil his economic blueprint, he should resist the temptation of embarking on belt-tightening as an end in itself. His administration appears to be drumming up the need to reduce the cost of governance. While this is an unassailable proposition, he should be circumspect about what he intends to cut.

In the process of cutting costs, care should be taken not to jettison investments and projects needed to enhance the country’s productive capacity. Buhari should consider increasing spending in sectors, projects, and programs that boost the economy, generate employment, and promote inclusive growth. These sectors include infrastructure, labor-intensive manufacturing, agro-processing, health, and education.

Nigeria is arguably a country where a massive economic stimulus program is urgently needed. It has a large stock of human and natural resources that are grossly underutilized. The informal sector is bloated, with millions of underemployed youths. Most of Nigeria’s graduates are unemployed or engaged in menial jobs.

Meanwhile, there is a huge infrastructural deficit that can be partly filled through public works projects executed with direct labor. These projects would provide temporary employment to unskilled workers, enabling them to gain experience needed for permanent jobs.

Buhari has the pedigree to shepherd a massive stimulus program. He’s known to abhor profligacy, which means that stimulus money will be spent prudently. He detests graft and corruption, which implies that stimulus funds won’t disappear.

This depends on whether Buhari will be able to prevent those around him from corruptly enriching themselves—something his predecessor failed to do. Like Obama, he cares deeply for the downtrodden, which suggests he’ll focus stimulus spending on job creation and economic empowerment.

Some may wonder how the Buhari administration could possibly finance stimulus spending. After all, he has inherited an empty treasury and faces dwindling oil revenues and a volatile global oil market.

But Nigeria could follow the example of Asian countries that financed their stimulus programs through domestic borrowing (mainly by issuing government bonds). Borrowing money domestically in one’s own currency is not nearly as problematic as external borrowing.

Financing stimulus spending via domestic borrowing comes with a price. It may crowd out domestic private investment by raising interest rates. But this would be temporary. The increase in aggregate demand generated by stimulus spending would subsequently crowd in investment in the production of goods and services. This ultimately will generate employment opportunities.

One of the usual concerns about stimulus spending is the risk of inflation. But unemployment, economic disempowerment, and youth restiveness are bigger threats to stability than inflation in the short to medium term.

Also, given the huge slack resources in Nigeria, it is doubtful that stimulus spending would precipitate hyperinflation in the short to medium term. In any case, the Central Bank of Nigeria has the necessary monetary instruments for reigning in inflation should it become a challenge.

Obama Stuck to His Convictions

One other lesson Buhari should learn from Obama is that it is better for a leader to stick with his or her convictions rather than let opinion polls or emotional sentiments drive their economic policies.

Some pundits were dismissive and derisive of Obama’s stimulus strategy when it was launched. The rest, as they say, is history.

Obama stuck with his stimulus strategy and eventually prevailed. At a recent rally in Minnesota organized to showcase the good news about the U.S. economy, Obama proudly proclaimed that:

It remains to be seen how history will judge the Buhari presidency, and whether he will be the quintessential Obama.

Stephen Onyeiwu is a professor of economics at Allegheny College in the U.K. This article was previously published on TheConversation.com