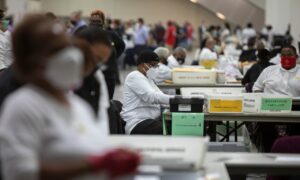 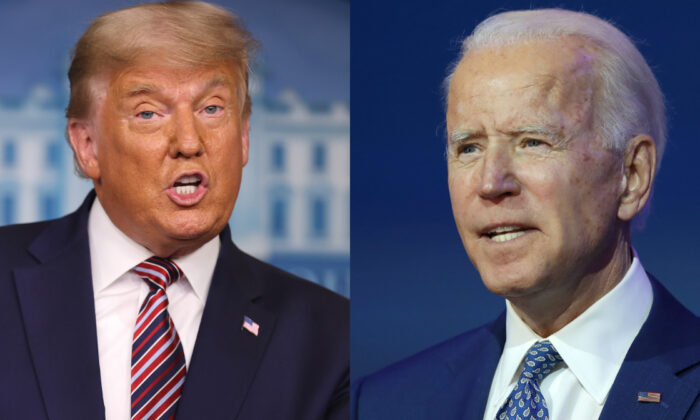 Voters are divided on who legitimately won the 2020 election, according to a new poll.

Just under half of the 1,200 respondents, or 49 percent, believe Democratic presidential nominee Joe Biden won. About a third, or 34 percent, said President Donald Trump won.

Voters were asked who they think legitimately won the presidential election.

Majorities or pluralities of men and women and all age groups and races chose Biden, except for those between the ages of 45 and 54.

Biden has declared victory in the election and many media organizations have projected that he won.

Trump and his campaign say the election is not over, citing possible voter fraud and unconstitutional measures in a number of states.

As legal battles play out, The Epoch Times is not calling a winner.

The poll was conducted by Just the News/Scott Rasmussen from Nov. 5 through Nov. 7. Most respondents were contacted online or via text; 168 were contacted by phone.

“During the time of this survey, no television network or other news source had formally called the race for Biden,” Rasmussen said.

About 51 percent of the 1,052 registered voters who said they voted in the Nov. 3 election voted for Biden; 45 percent voted for Trump.

The survey had a margin of error of plus/minus 2.8 percentage points.

A majority of voters favorable to Trump, 71 percent, chose one of the two options.

Most Democrats said they believe the election was fair and free.

Of those who said the election was probably or definitely not fair and free, 84 percent said they think Biden benefited the most.

These respondents were asked why, specifically, they thought the election was not fair and free. They could choose more than one answer.

Other options were: state and local officials helped candidates; there was voter intimidation; there were online disinformation campaigns; structural barriers were in place, such as mail-in voting restrictions; the U.S. Postal Service did not process all of the mail-in ballots; and foreign actors interfered with the election process.

The Politico/Morning Consult poll was conducted Nov. 6 through Nov. 9, surveying 1,987 registered voters. The majority of the voters were surveyed after outlets called the race for Biden. The margin of error was plus/minus two percentage points.