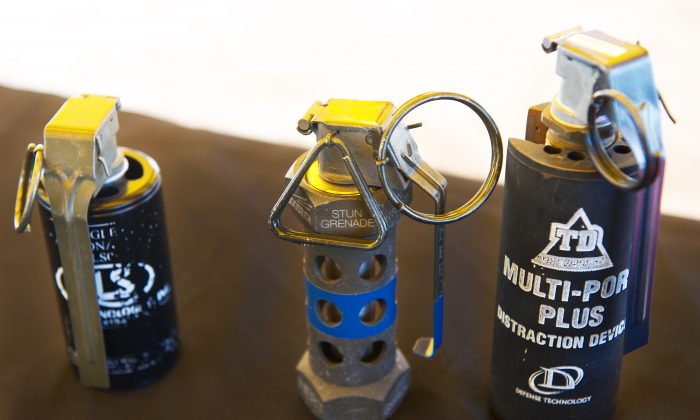 Non-lethal flash-bang/stun grenades on display during a media event showing non-lethal weapons at the US Marines Corps Base Quantico base in Virginia March 9, 2012. (Paul J. Richards/AFP/Getty Images)
US

A journalist says he was singed by a flash-bang fired by St. Louis County police trying to disperse a crowd, raising questions about how to use these military-style devices safely and appropriately.

Peter Callahan was caught between two police lines in the West Florissant section of Ferguson, Mo., on Sunday night, when something fiery hot singed his leg. A nearby protester’s shirt briefly caught fire.

Callahan, a Washington D.C.-based journalist, deduced that he had been hit by a flash-bang device. “I was also at Occupy Wall Street,” he said. “This is a lot worse.”

Diagram of a 7290 flash-bang from a Combined Tactical Systems product specification document.

Among the debris protesters and journalists have picked up in the days since Michael Brown was killed are canisters of the 7290 flash-bang made by Combined Tactical Systems, a “less lethal” diversionary device that has made its way into law enforcement agencies’ toolkits to carry out search warrants, and less frequently, to disperse crowds.

Flash-bang devices are one of many military-style weapons being used in Ferguson, along with tear gas and beanbag munitions. While marketed as non-lethal, there have been instances in which flash-bangs have caused serious injury and sometimes death when used by police, prompting debate over their proper use.

Earlier this year, a flash-bang critically injured a two-year-old baby in Georgia when a police special response team threw one into a crib while entering a home on a narcotics warrant.

According to Sgt. Colby Dolly, St. Louis County’s 18-member tactical unit used the 7290 CTS flash-bangs for the first time three nights after Michael Brown’s death and has continued to use them periodically in the subsequent days.

It’s not clear how many people may have been burned or hit by flash-bangs in Ferguson. S.W.A.T. teams typically use them to temporarily paralyze suspects and prevent them from destroying evidence while carrying out search warrants and no-knock raids. They are less commonly used for crowd control and inside prisons.

Flash-bangs are descended from blank grenades developed by military special operations units. In the split second they take to deploy, they emit a wave of heat, light and sound intense enough to cause temporary blindness and deafness within a five-foot radius. Within closer range, they may cause partial hearing loss and bodily injury – particularly for children who are standing lower to the ground and closer to the impact. Some experts say that when used outdoors, flash-bangs can pick up gravel and launch it like shrapnel.

Accidents have been documented since the first days American tactical teams started using flash-bangs. In 1984, less than a year after the Los Angeles Police Department incorporated flash-bangs into their S.W.A.T. team, a woman was killed when a device exploded at her back as a tactical team entered her home to carry out a drug raid.

Flash-bang manufacturing has evolved significantly since then from crude explosives that detonated like grenades without shrapnel, to today’s flash-bangs, many of which release a sudden volume of igniting gas through vent holes and leave behind an empty canister, like those found on the streets of Ferguson.

Witnesses to this week’s unrest in Ferguson told ProPublica it feels like the ground is shaking when the devices deploy nearby. “It was a real loud explosion and people began to run, but they didn’t know where to run to,” said Tef Poe, who has been on the streetsthe past 12 days.

Dolly said that his agency hasn’t been able to track injuries because individuals scatter when a flash-bang is deployed near them. “If you say you’re injured, you’re implicating yourself in causing trouble,” he said.

The St. Louis County tactical unit uses flash-bangs occasionally when carrying out search warrants, but Dolly could not recall his unit ever using them to disperse crowds until this week.

In St. Louis County, tactical officers get a four-hour training course on flash-bangs taught by a member of their team. The in-house instructors are sent to Combined Tactical Systems for a three-day course to become certified trainers. CTS didn’t respond to inquiries about what its training courses cover.

Proper training is critical to ensuring that flash-bangs are used safely, said R.K. Miller, who teaches tactical officers with the California Peace Officers Standards and Training. “They’re dangerous if they’re not used correctly.”

The National Tactical Officers Association also offers training and sample guidelines on the use of diversionary devices including flash-bangs. Many tactical teams also attend training programs run by device manufacturers.

Peter Kraska, a professor in justice studies at Eastern Kentucky University who has written extensively on police militarization, contends that S.W.A.T. units typically offer much less training than the 250 hours per year the NTOA recommends, with “over 50 percent of teams in smaller jurisdictions receiving a mere 50 hours per year per officer,” Kraska has reported.

In 2008, flash-bang manufacturers agreed to best practices and launched a voluntary program preventing sales of flash-bangs to law enforcement agencies that lacked certified trainers. Don Whitson, who teaches a course for the officers’ association on ‘less lethal’ tactics including flash-bangs, says he has seen fewer injuries from flash-bangs since the agreement, but data quantifying these injuries does not exist.

Some law enforcement experts say that, even with the training issues, flash-bangs are preferable to other devices the police have used for similar purposes.

“I would rather see flash-bangs used than gas grenades which contaminate everyone, guilty and innocent,” said Charlie Mesloh, a professor at Northern Michigan University who studies less lethal weapons. “There is very low risk of injury unless it literally went off when it was in contact with a person.”

Still, Dolly acknowledged that there’s no way to eliminate all risk, especially in the volatile and fast-changing situations police have faced on Ferguson’s streets.

“Anytime you deploy a less-lethal device there’s risk involved,” he said. “You always consider the background and what’s in the environment.”

Republished with permission from ProPublica. Read the original.